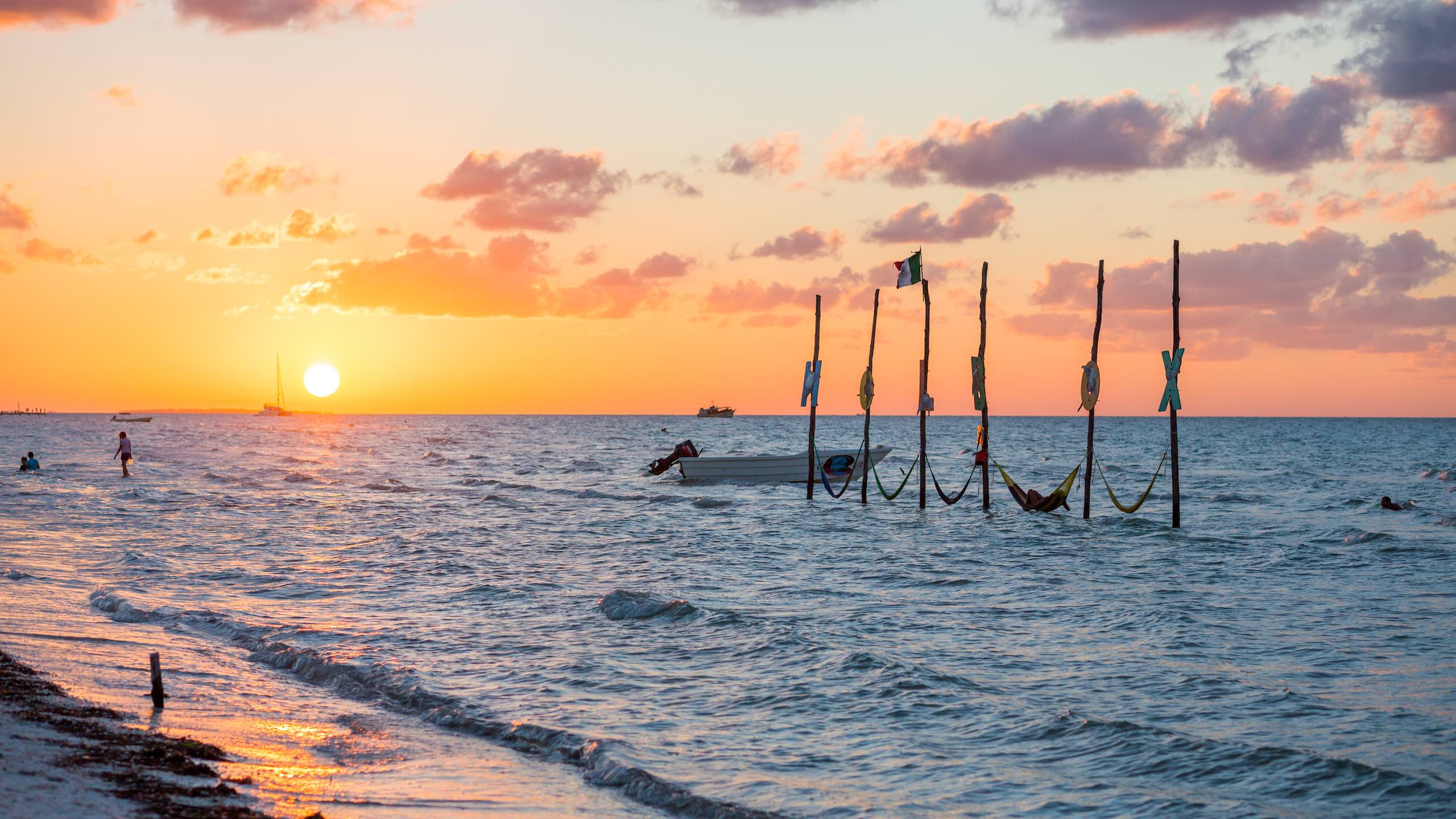 Things to do in Isla Holbox, Mexico

Mesmerising turquoise water and expansive azure sky meet luxurious, sugar-fine sand. Hammocks gently sway in the sea breeze, supported by sticks jutting out of the calm water. Golf carts replace cars as they meander down the streets of packed sand. Welcome to Isla Holbox, Mexico—an idyllic island that feels worlds away, yet remains (somewhat) easily accessible from the tourist hub of Cancun. If you’re ready to escape to paradise, then look no further. This skinny, 26-mile island boasts just about everything you could ask for in a tropical getaway: secluded beaches, starry night skies, abundant nature, and a notable no-fuss attitude. For those travellers who are tired of the ever-increasing commercialisation in destinations in the Yucatan Peninsula, Isla Holbox is a welcome escape. Of course, lack of development means forgoing some luxuries like infinity pools and manicured all-inclusive resorts. But if you want to revitalise and rejuvenate in nature, while still enjoying conveniences like air conditioning and fine dining, you’ll be hard-pressed to find a more magical locale.

The island is considered one of the best places in the world for a swim with the world’s largest fish: the whale shark

If all you care to do on your vacation is while away the day in a hammock with a cool drink in hand, then Isla Holbox has got you covered. But for those active travellers who prefer to get-up-and-go, there are plenty of natural attractions to experience in paradise.

For starters, the island is considered one of the best places in the world for a swim with the world’s largest fish: the whale shark. Easily Isla Holbox’s biggest draw, every June through September magnificent whale sharks migrate off the coast, providing snorkelers with the opportunity for an up-close encounter with the gentle giants. The crystal-clear water with incredible visibility provides the perfect setting to see and swim alongside the whale sharks. A licensed guide is required to accompany all swimmers; VIP Holbox is an eco-friendly choice. 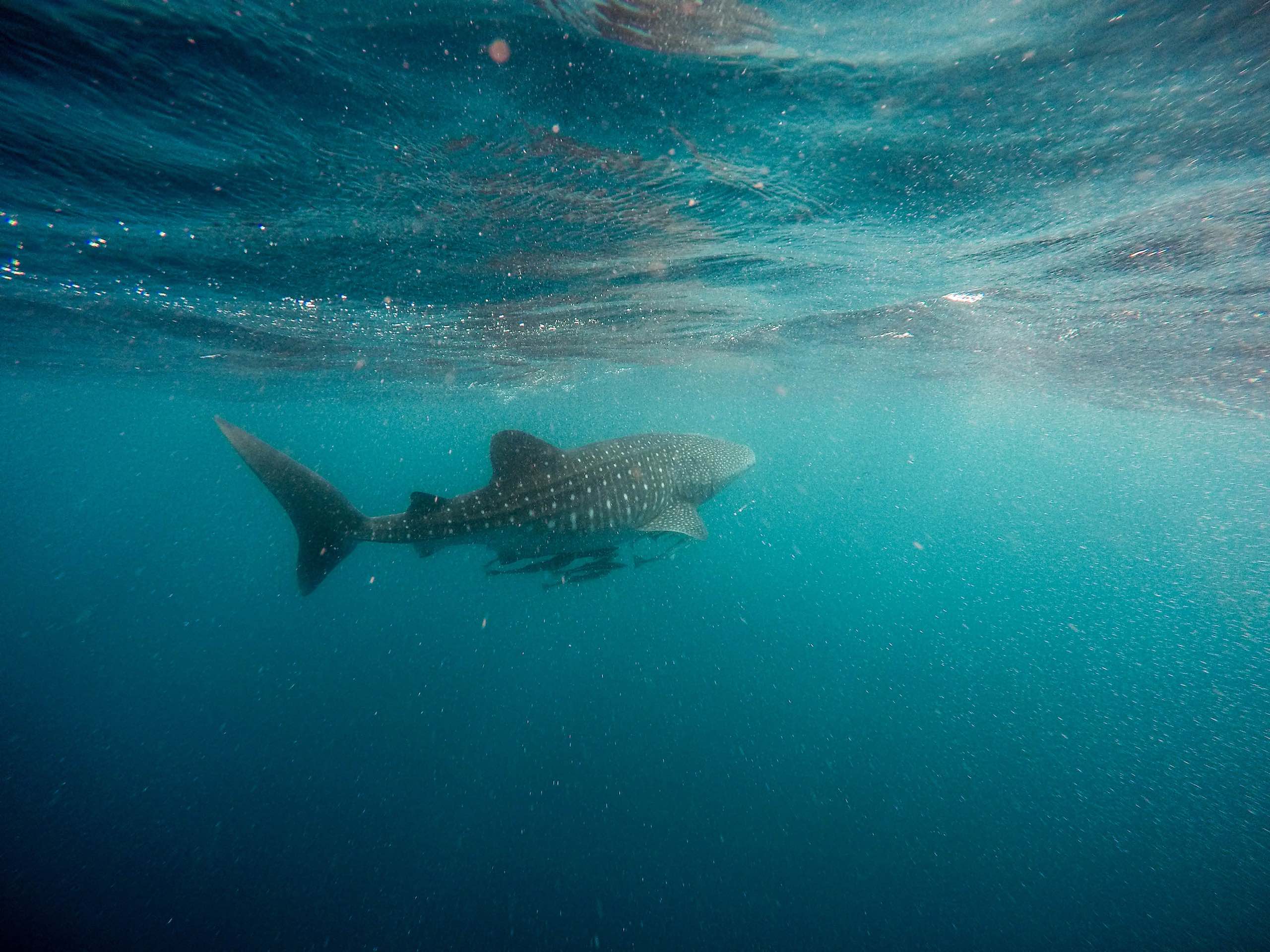 If you’re not visiting Isla Holbox during whale shark season, don’t worry—there are heaps of other wildlife species and natural attractions to see at any time of the year. Isla Holbox is a small part of Mexico’s largest ecological preserve, Yum Balam, which was established in 1994 at the request of local communities. Throughout the preserve, flamingos, dolphins, turtles, manatees, and a large variety of native birds, flora and fauna are all prevalent.

For a unique way to spot egrets, osprey, storks and other birds, grab a kayak and explore the coast via Explora Holbox Kayak Tour. The small, slow-paced tours compliment the vibes of the island perfectly, and are an eco-friendly way to witness the vast diversity of bird species that call the area home.

When you’re ready for a refreshing dip in the water, it’s time for a visit to the Yalahau Lagoon. The quaint, fresh-water swimming hole is just a twenty-minute boat ride from Isla Holbox. Enjoy the serene jungle setting, and don’t forget to climb the wooden tower for an exceptional view of the surrounding area.

For those travellers who prefer dry land to water, Isla Holbox’s International Public Arts Festival is a major draw. Each April, IPAF aims “to bring together artists from around the world to reclaim the public sphere with artworks inspired by the dreams of the inhabitants of Holbox Island.” Keep your eyes peeled for vibrant murals around the island from the festival. 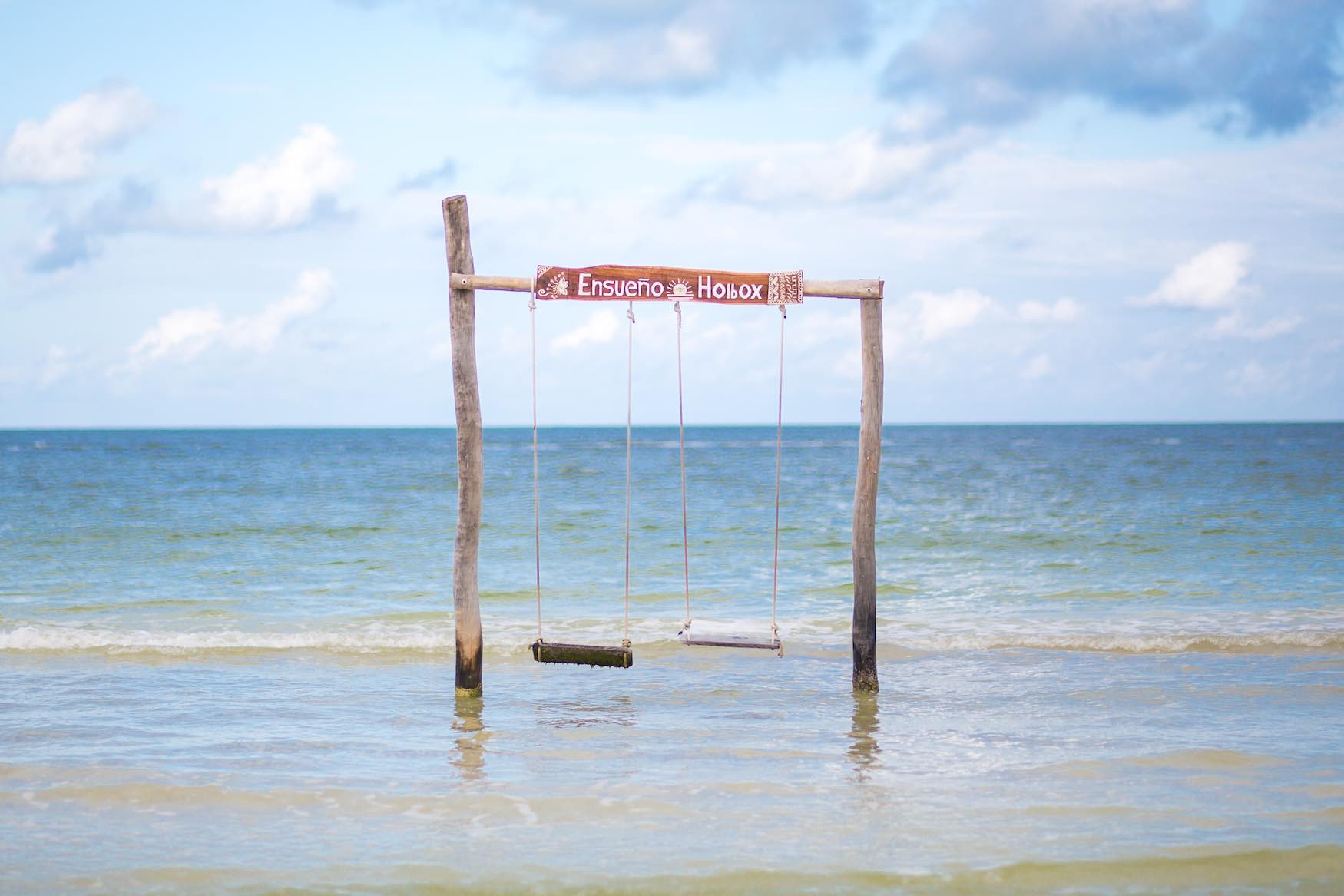 Going to Isla Holbox? The same team that brings you the content you love designs your perfect trip 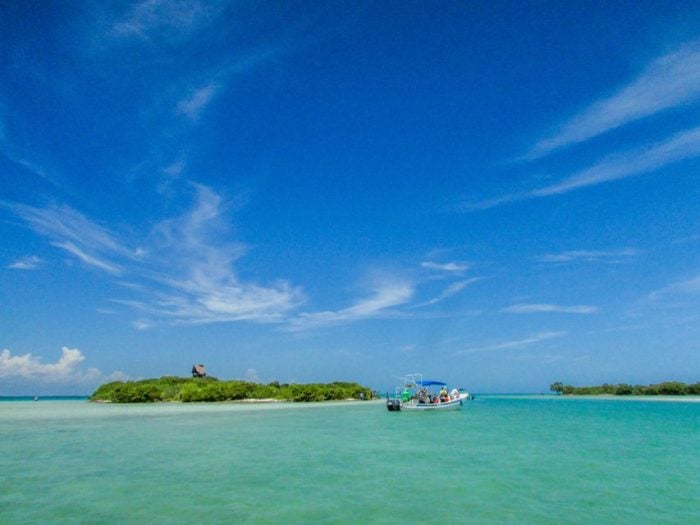 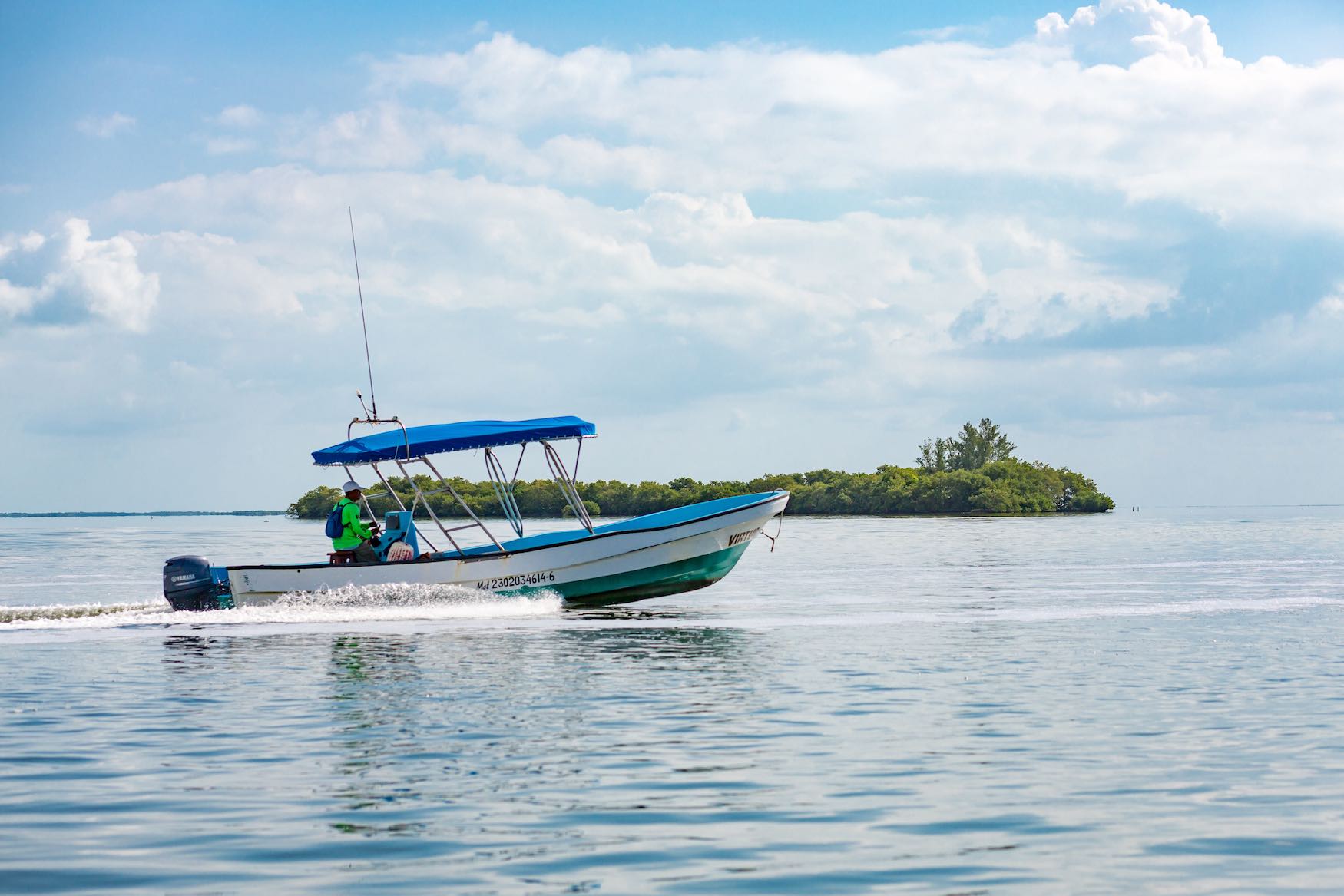 Explore more experiences like this in Playa del Carmen

Locals say that Isla Hotbox once had so many lobsters, you had to avoid stepping on them while walking down the street. While today that likely won’t be a problem, lobster remains the talk of the town—this time in the form of a unique pizza topping.

Tell anyone on the Yucatan Peninsula that you’re headed to Isla Holbox, and they’ll tell you that you simply cannot leave without sampling the local delicacy: lobster pizza. The ultra-rich combination of buttery lobster and salty, gooey cheese is as mouth-watering as it sounds.

Just about every restaurant on Isla Holbox claims to have ‘the best lobster pizza,’ but if you want to sample the original, you’ll need to head to Edelyn Pizzeria and Restaurante.

For such a small island, Isla Hotbox has quite the burgeoning food scene with a heaping selection of delicious restaurants. Viva Zapata is an excellent choice for the fun ambience and fresh seafood. Rosa Mexicana is the obvious answer for authentic Mexican cuisine. El Chapulim is the most upscale—and quite possibly the best meal you’ll have in all of Mexico. At the latter, don’t expect a menu; the chef will come to your table to explain the available dishes based upon what is fresh that day. 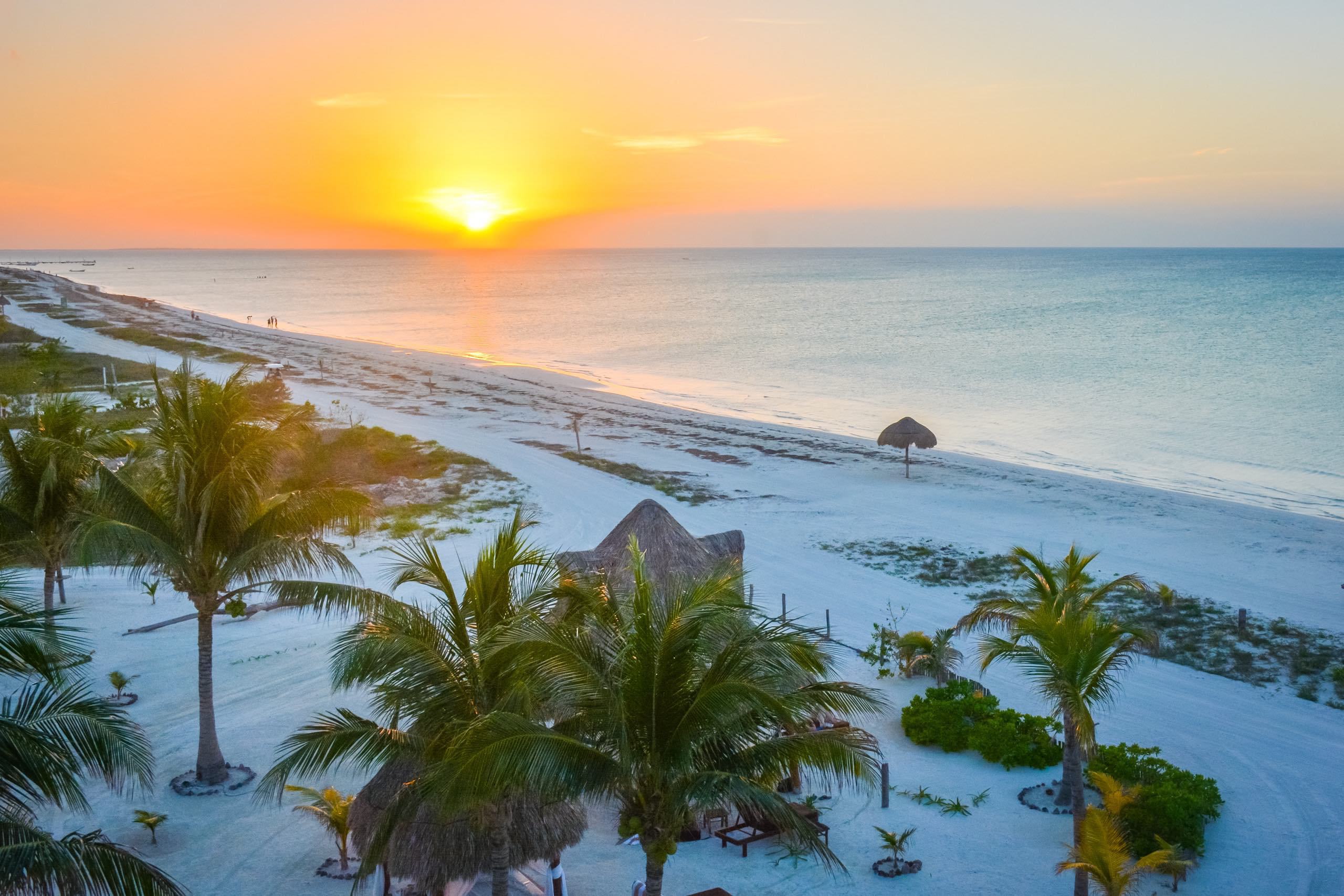 With the rise in stylish travellers heading to Isla Holbox to experience serenity at its finest, there are now a handful of luxurious hotels that dot the island. CasaSandra is perhaps one of the best choices, an upscale boutique hotel with private beach access and exquisite sea views. The owner is a full-time artist, which is made obvious by the fantastic works of art and handmade Mexican furniture that decorate the property.

Casa Las Tortugas is a family-run beach hotel with glowing reviews. Rooms are located in traditional Mayan bungalows and decorated with unique souvenirs from the family’s South American travels.

Petite and breezy Casa Cat Ba is a high-taste hotel with just five rooms, each of which boasts a palette of earthy tones, vintage wardrobes, rattan and touches of driftwood. Let your preoccupations drift aways in a hammock right on the beach, under the shade of a palapa. 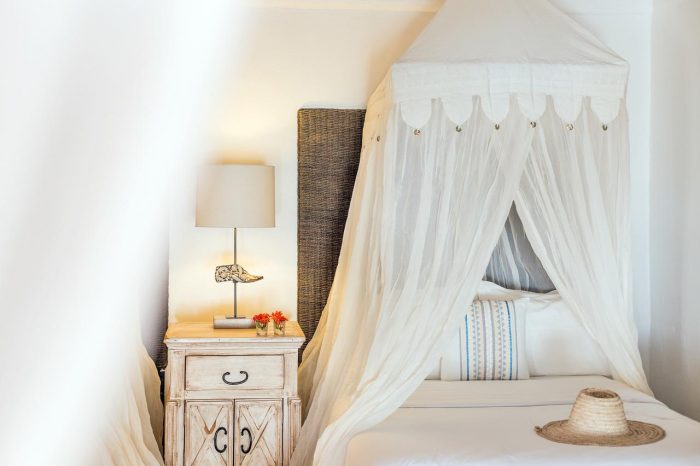 This boutique hotel, located on Holbox Island, is situated along the Gulf of Mexico and the Caribbean Sea, offering sea views, a private beach with cabanas, and an on-site restaurant. 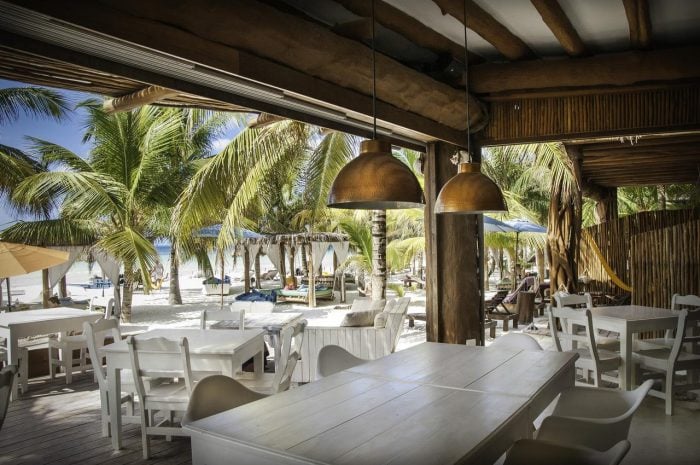 This family-run hotel is located next to the beach on the beautiful Holbox Island, just off Mexico’s Yucatán Peninsula. It offers an outdoor pool, hot tub, hammam and stylish hut-style rooms. 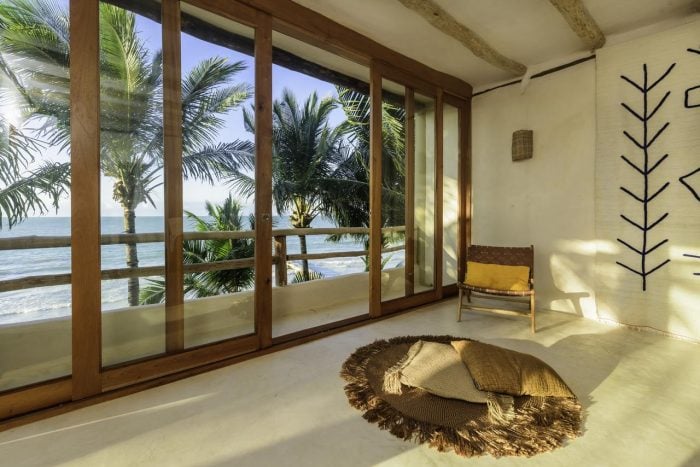 Casa Cat Ba in Holbox Island provides adults-only accommodation with a bar, a shared lounge and a garden. The property provides sea views, a terrace, and free WiFi is available throughout the property. 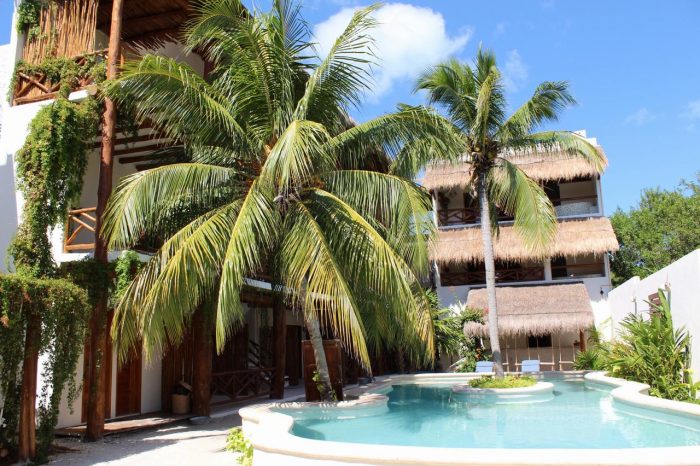 Tierra Mia offers accommodation in Holbox Island. All rates include an a la carte breakfast. A range of activities is offered in the area, such as snorkelling and fishing. 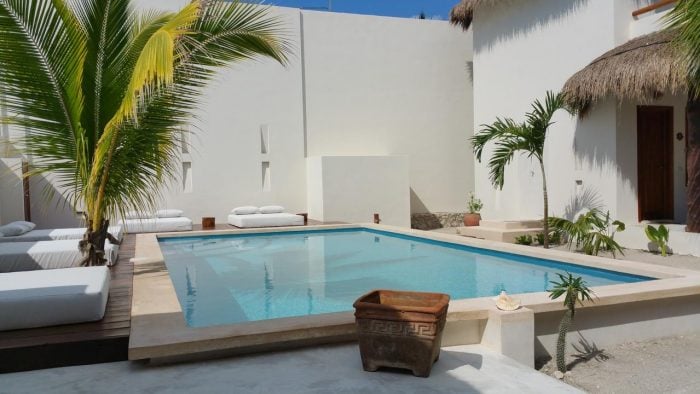 Offering an outdoor pool and views of the pool, Tierra del Mar Hotel is located in Holbox Island. A terrace or balcony are featured in certain rooms.

Explore more places to stay like this in Isla Holbox

How to get there

Most travel to Isla Holbox from Cancun. From here it is easy to take a rental car or hire a private driver to take you to Chiquila (about three hours.) Once in Chiquila, you’re just a quick ferry ride to the white sand streets and swaying palms of Isla Holbox.

Whether you want a resort vacation, wildlife safari, city break, luxury cruise, wellness retreat, honeymoon, once-in-a-lifetime adventure or weekend escape, the trip curation experts at Mr Hudson make travel planning a breeze. Contact us to find out how we can handle the finer details of holidaying in style. 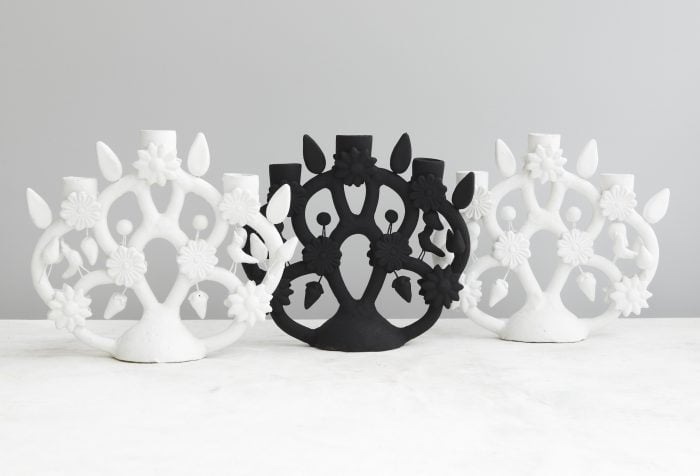 Based in Mexico City, Onora is a handcrafted design brand that brings together a unique selection of innovating handmade pieces, mindfully tweaking traditional design without sacrificing cultural identity. 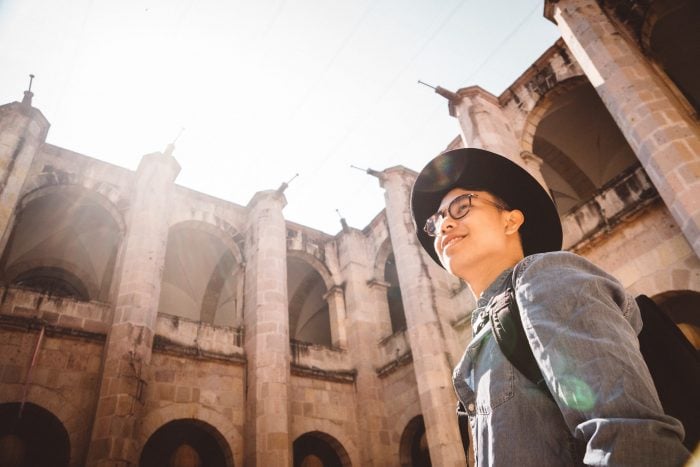 Oaxaca City has long drawn artists and creative minds to her cobbled streets, and just one visit to the enchanting colonial city is all it takes to see why. 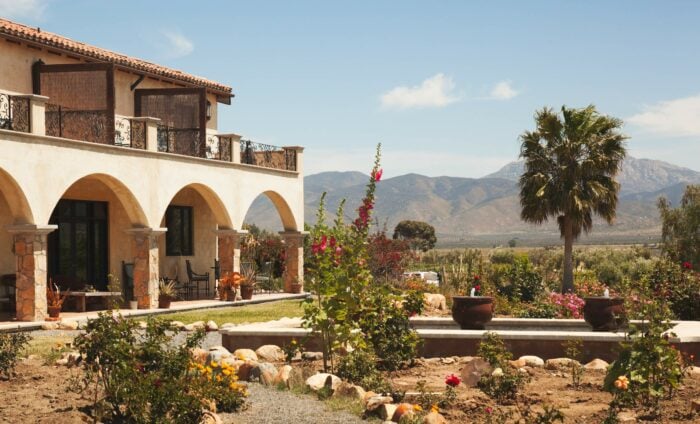 Discover the 10 best hotels near the US-Mexican border

The line separating the US from Baja California breeds a whole lot of excitement; Tijuana, Tecate and Mexicali being our first contacts before angling down towards either San Quintín on the west coast or San Felipe to the east. Find out where to stay with our list of the best hotels near the US-Mexican border.