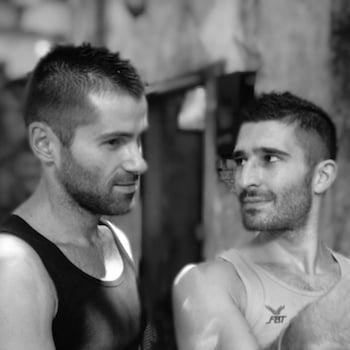 The Nomadic Boys are Stefan and Sebastien, a gay couple from London, originally French (Sebastien on the left) and Greek (Stefan on the right). Sebastien is an IT geek and Stefan an ex-lawyer. In June 2014, the boys gave up their jobs and lives in London to travel the world. Nomadic Boys is their travel blog chronicling their gay adventures and food discoveries along the way. They spent 18 months in Asia and are soon heading off to Latin America for their next big adventure.

The waters in Komodo National Park in Indonesia offer a plethora of wildlife but with strong currents, making scuba diving here exciting, but more suitable for advanced divers.

Galapagos Islands Wildlife has few predators, which has allowed various species to flourish over the years. As such they have little fear, especially towards humans.

The best gay-friendly hotels in Bali

Unlike the rest of Indonesia, Bali is a pink oasis with an excellent gay scene and plenty of romantic, gay-friendly hotels.

The best street food in Thailand

Street food in Thailand is everywhere. Hawker stalls are so ubiquitous in the country that they have replaced home cooking in many places.

Things to do in Esteros del Iberá

Esteros del Iberá is one of the hidden secrets of Argentina; it is the second largest wetland in the world after the Pantanal in Brazil.

Things to do in Japan’s Yaeyama Islands

When you think about Japan, images of geisha, delicious sushi and beautiful temples will most likely spring to mind. But what about tropical islands, pristine reefs, secluded beaches and jungles?

Trekking the Annapurna Circuit in Nepal

Trekking the Annapurna Circuit in Nepal will be one of the most memorable experiences of any traveller. It is a real test of endurance, but the views make every sweat and tear worthwhile.

Machu Picchu lies on a mountain ridge in Peru at 2,430m (7,970ft) altitude, and you can reach it via train from Cusco. Or, you can tread in the footsteps of the Incas and get there via one of the most famous treks in the world.