Overlooked by the towering peaks of the Andes to the north and shaped by mighty glaciers towards the south, Argentina is a melting pot of natural splendour and urban vibrancy. The capital, Buenos Aires, boasts an abundance of European-style architectural charms and a culture influenced by Europe, Latin America and the nation’s indigenous peoples. In this modern metropolis, public life is celebrated, which is showcased by trendsetting boutiques and innovative gourmet diners through to streetside tango shows. Further towards central Argentina near the border with Chile is Bariloche, also known as Little Switzerland thanks to its alpine structures, love of chocolate, and backdrop of rugged peaks. Way towards the southern tip of Argentina, you’ll find the Perito Moreno Glacier, a sight that’s just as astonishing as the 275 cascades of the thundering Iguazu Falls in the nation’s northeast corner.

While it would take a lifetime to discover all the dynamic cities and incredible wilderness of Argentina, a ten-day trip can include a combination of urban and natural highlights that promise to leave a lasting impression. This itinerary will take you to historic cities such as Buenos Aires and Bariloche as well as natural wonders like the Perito Moreno Glacier and the Iguazu Falls.

Argentina at a Glance

Argentina is one of South America’s most friendly destinations for LGBTQ+ travellers. While attitudes can be on the conservative side in rural areas and small towns, cities like Cordoba, Mendoza, and especially the capital, Buenos Aires, have thriving gay scenes and progressive rights enshrined in law for the LGBTQ+ community. Argentina was the continent’s first nation to legalise same-sex marriage along with full adoption rights in 2010, and the right to change gender was legalised in 2012. Hate crimes based on gender identity or sexual orientation are punishable by life imprisonment.

As the world’s eighth-largest country by landmass, Argentina is home to landscapes ranging from desert and subtropical to mountainous. In southern Patagonia, temperatures can be extremely cold. In northern destinations such as the Iguazu Falls, weather conditions can be hot and humid year-round. The peak tourism seasons are winter (June to August) and summer (December to February), though you might want to visit in November to attend the annual Pride festival in Buenos Aires.

Springtime (October to mid-December) and Autumn (April to mid-June) 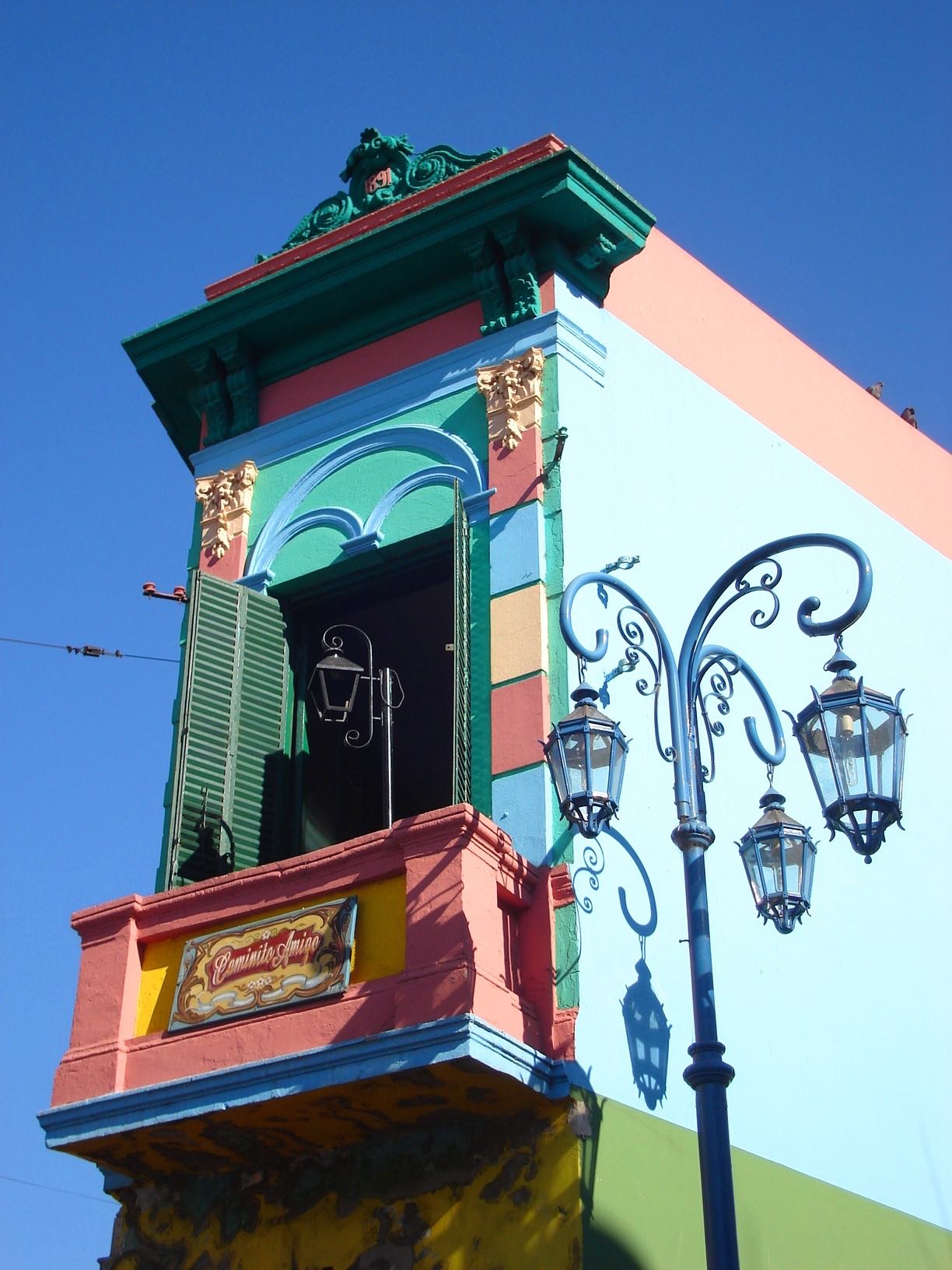 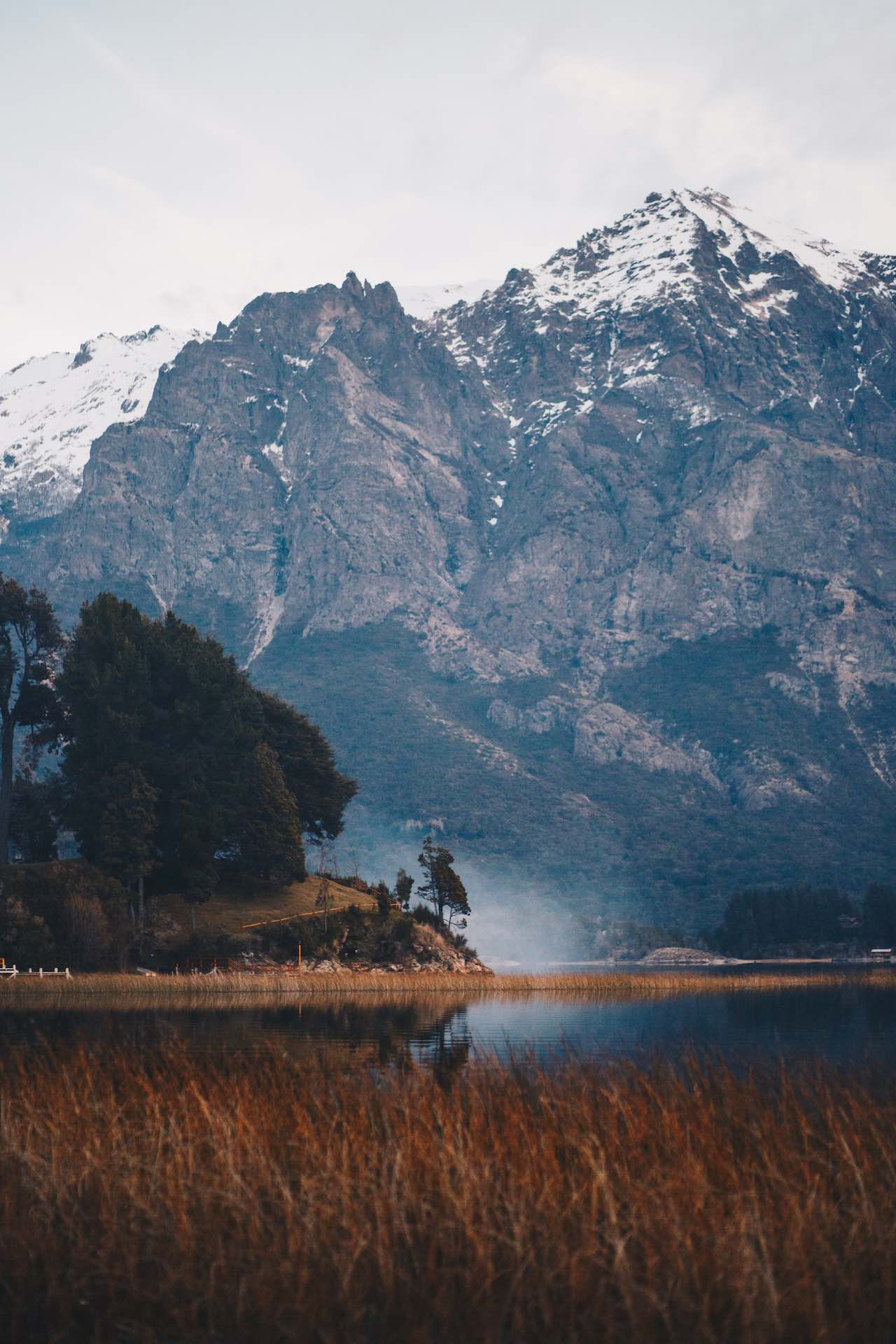 By following this itinerary, you’ll start and end in Buenos Aires, staying in destinations including Bariloche and El Calafate during the trip.

After checking into your hotel, take the first day to relax after a long flight and prepare for tomorrow’s adventure. 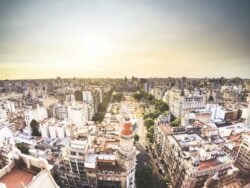 Today, embark on a sightseeing and cultural tour of the Argentinian capital, Buenos Aires, also known as the Paris of South America. While visiting landmarks such as the Plaza de Mayo, you’ll notice the European influence on the city’s architecture. In San Telmo, the city’s oldest residential neighbourhood, you’ll see picturesque buildings and antique shops lining the cobbled streets. End the day with an evening dinner and tango show at the famous Rojo Tango.

Relax after flying to Bariloche and checking into your hotel on day three.

On day four, discover Bariloche's top sights, which include rugged peaks, lush hills and historical landmarks. Join a guided tour through the forest and take part in the cultural ritual of toasting with a delicious Argentine beverage. In the afternoon, consider booking a tour of a local brewery. 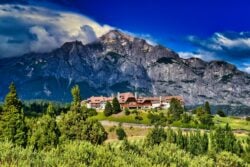 Take day five to make the most of the outdoors in Bariloche. You could try activities such as hiking, kayaking, horseback riding, rafting or mountain biking. Alternatively, you could play a round at one of Patagonia’s best-regarded golf courses.

On day six, fly to the rustic, charming town of El Calafate, the gateway to Argentina’s famous glaciers. Take the day to relax after checking into your hotel. 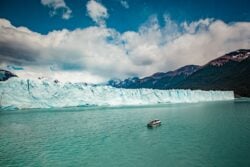 Today, you’ll come face-to-face with one of the world’s few remaining advancing glaciers, the Perito Moreno Glacier. You can take in views of the glacier’s southern and northern faces from walkways situated at different distances and heights.

Fly to the Iguazu Falls

Spend the morning admiring the Patagonian landscape surrounding El Calafate before flying to the Iguazu Falls, where you can spend the evening relaxing at your hotel. 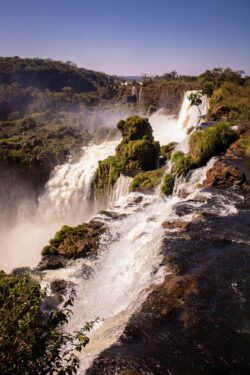 On day nine, you’ll soak up the view of the 275 cascades that make up the mesmerising Iguazu Falls. You can take a stroll above the falls amid the surrounds of exotic birds, butterflies and tropical flora. Also, follow the boardwalk that extends nearly a kilometre above a river to Devil’s Throat, a waterfall that marks the border between Brazil and Argentina. We also suggest visiting Devil’s Gorge and learning more about the region at the Iguazu National Park Visitor’s Center. 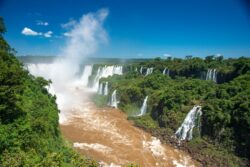 Spend the morning admiring the Iguazu Falls from the Brazilian side before flying back to Buenos Aires, where you can catch a connecting flight home.

Since you’re watching the show at Rojo Tango, you might want to get your feet moving by booking a private lesson with the performers. If you can spend an extra day or two in the south, we suggest taking a wilderness walk to Lago Argentino and exploring the Los Glaciares National Park. While visiting the falls at the Iguazu National Park, you might want to embark on a tour that follows the Yacaratiá trail through the jungle in an open-air vehicle. You can also raft over rapids along the Lower Iguazu River. 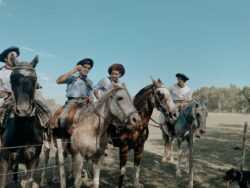 Get in touch if you would like us to arrange your Argentina trip. Did you have a different Argentina itinerary in mind? No problem. We tailor every trip to your individual travel style and passions so just let us know what you’re looking for. 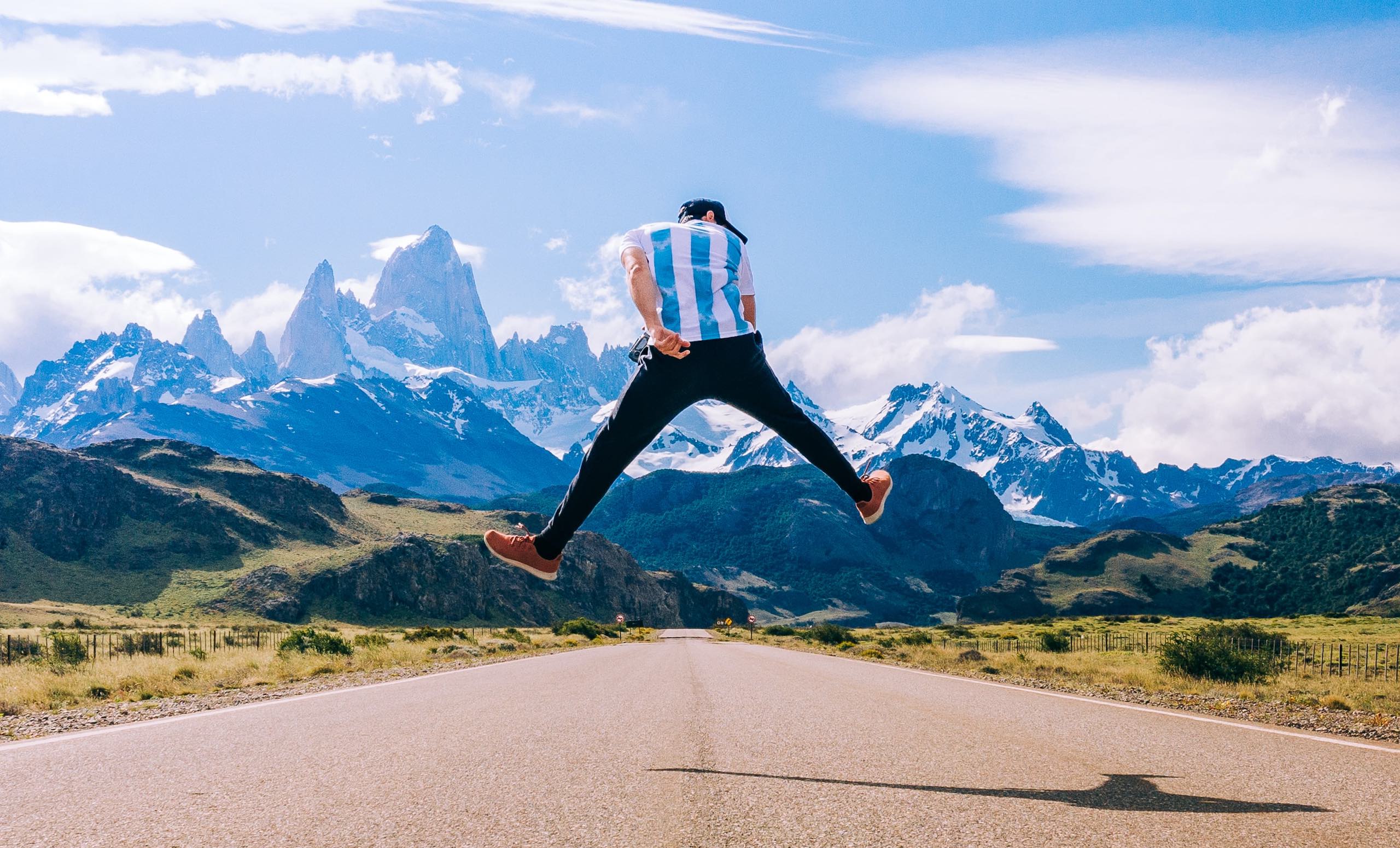 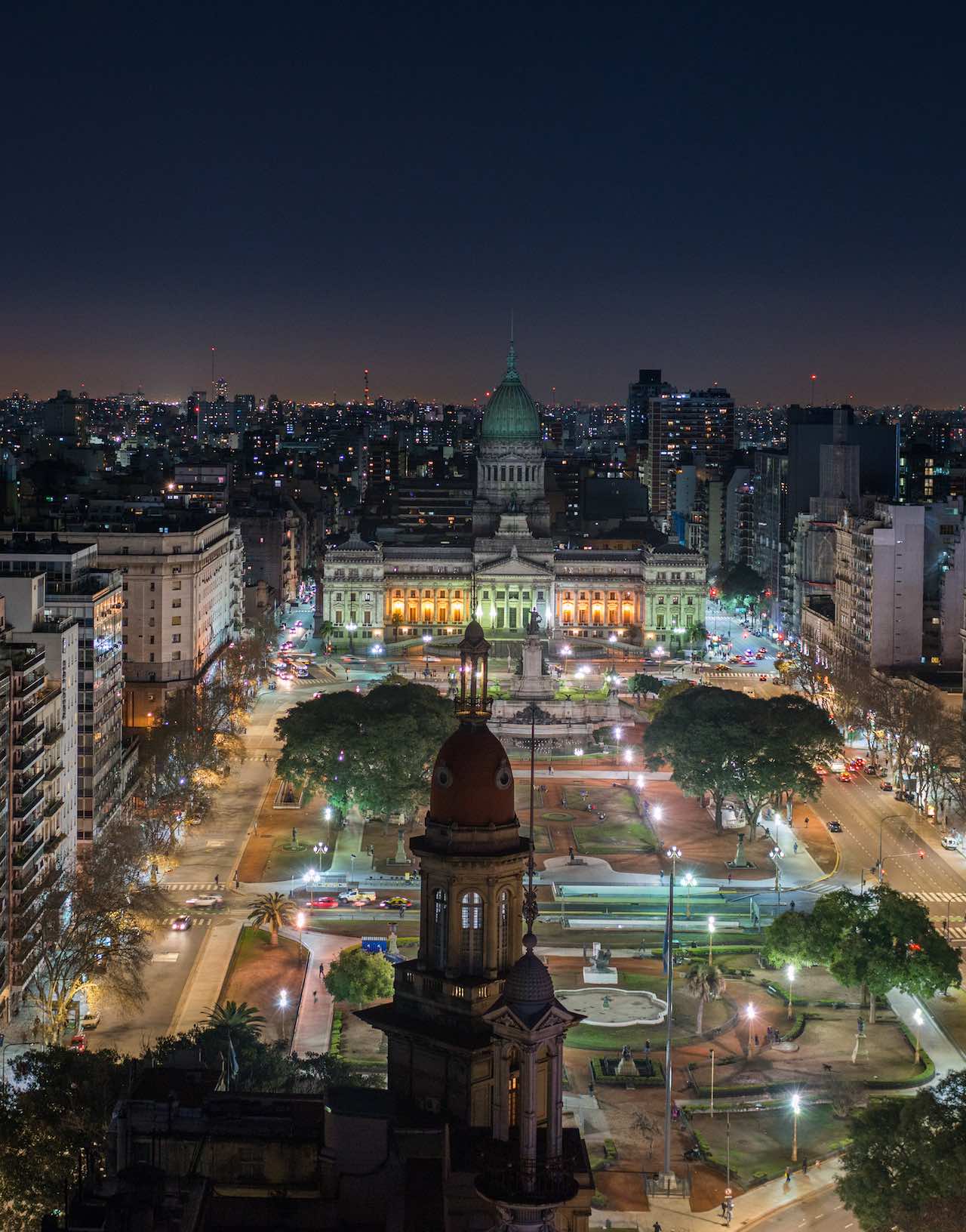