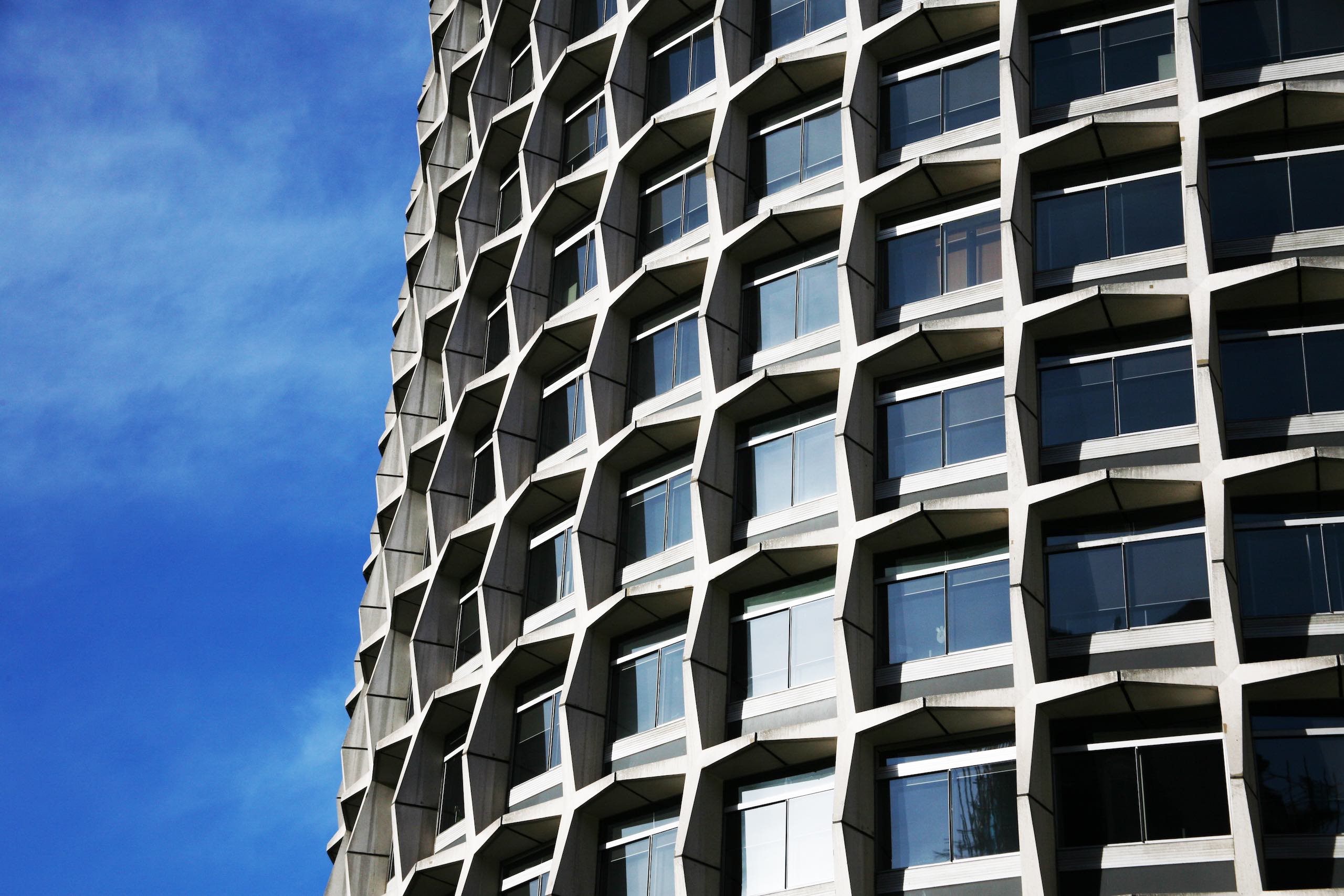 Thank heavens that Brutalism, one of the 20th century’s most notorious and controversial styles of architecture, is having a revolution. Revered by architects, reviled by politicians, these concrete masterpieces cause more arguments than any other architectural movement. Originally referred to as ‘The New Brutalism‘, a term coined by architects Alison and Peter Smithson, Brutalism isn’t as harsh as it sounds, and to love it, one has to put it in context and understand the movement. Despite its rather ominous title, the word Brutalism actually comes from the French word brut – meaning raw. The use of raw materials and large shapes define Brutalist buildings, and in recent years, imposing concrete housing estates have become meccas for design perverts. Once a haven frequented by undesirables where anybody compos mentis would avoid with peril, these enormous structures are now Instagrammed like works of art. Like any modern metropolis, concrete buildings can be found all over the capital. London, like Paris, has more than its fair share of Brutalist works. Here, Mr Hudson explores ten of the finest.

For those that merely want to metaphorically dip their toes, the Southbank Centre cluster of buildings is a good place to start. The site consists of the Royal Festival Hall, Queen Elizabeth Hall and Hayward Gallery, and is Europe’s largest centre for the arts. It stands proudly on London’s Southbank; its unforgiving concrete mass is a glorious fixture of the River Thames. At night, the large concrete surfaces let the interior lighting do the work – another key fixture of Brutalism. Inside these buildings, vaulted concrete ceilings and huge concrete pillars make up the design. The venues offer a world-class arts programme including theatre and modern art exhibitions.

A stroll eastbound from the Southbank Centre towards Tate Modern affords a glimpse of Sampson House – another enormous Brutalist creation that wouldn’t look out of place on the set of Luc Besson’s The Fifth Element. Its imposing exterior is used as the set for BBC drama Luther and at street level it is a sprawling concrete mass with few windows; it acts as a fortress protecting secrets. In truth, it’s a generic office building, but as you walk around let your imagination run wild as to what may occur within its heavy, thick walls. From afar, it looks like a load of concrete floors stacked haphazardly atop each other – wonderful. 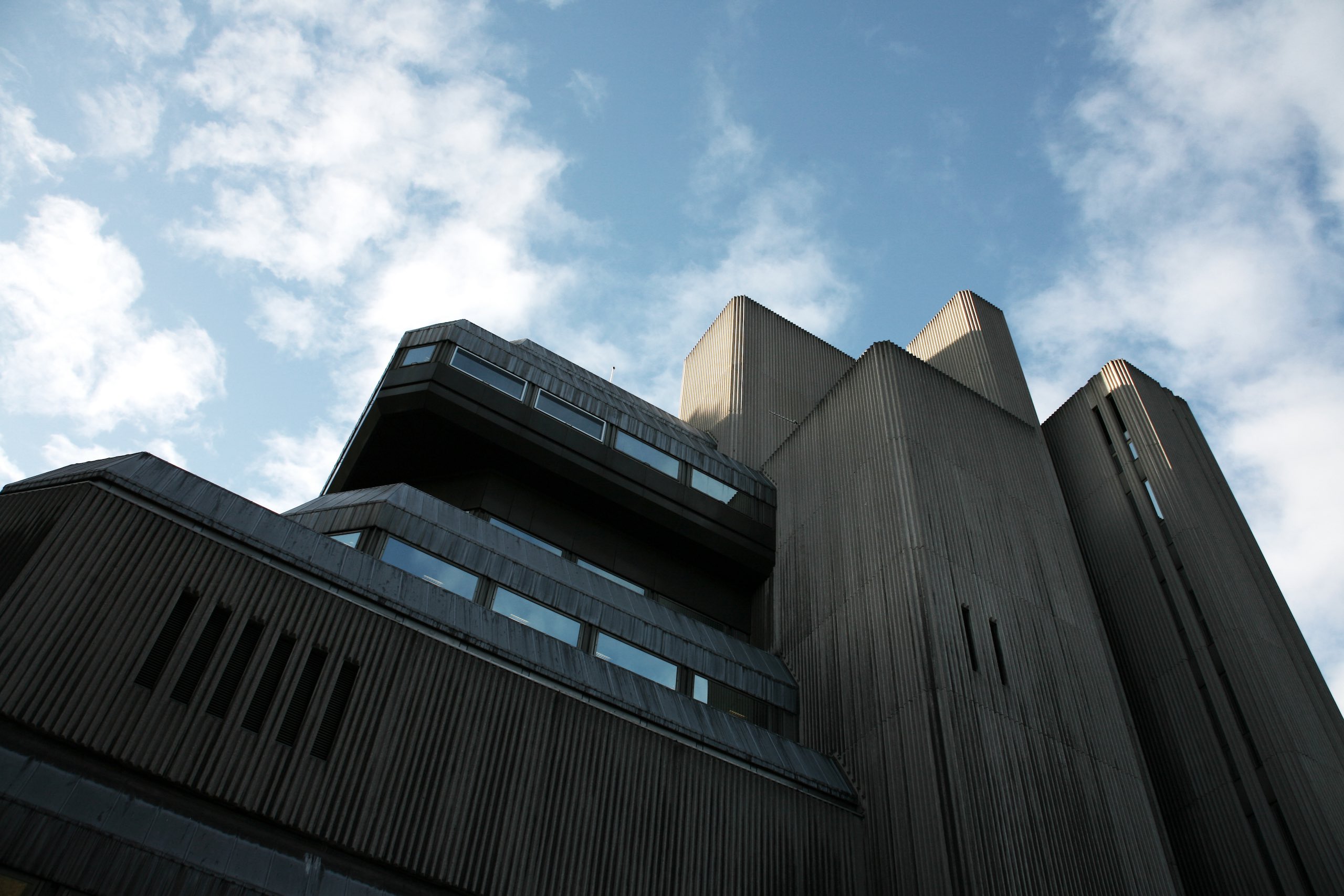 The Barbican is an unrivalled housing estate. Built on the site of an old fortress, architects Chamberlin, Powell and Bon took literal inspiration from the site’s history to build an enormous acropolis. Most Londoners will tell you that they would rather stroll around the length of the encompassing walls than brave the disorientating walk through its core. Technically, this is where the architects failed; their vision was to create a welcoming city within a city, but the site is so complex that it is impossible to navigate freely. In later decades of the twentieth century, you could barely get anybody to go near it at all. All that, of course, has changed. Once an undesirable scar on the City of London landscape, the Barbican is now a highly sought-after residence and matriarch of the London Brutalist scene. Whether you circumvent London’s Brutalist behemoth or dive straight in, you can’t help but marvel at its sheer scale, its beautifully curved balconies, or its residents’ harmonious approach to growing perennials. 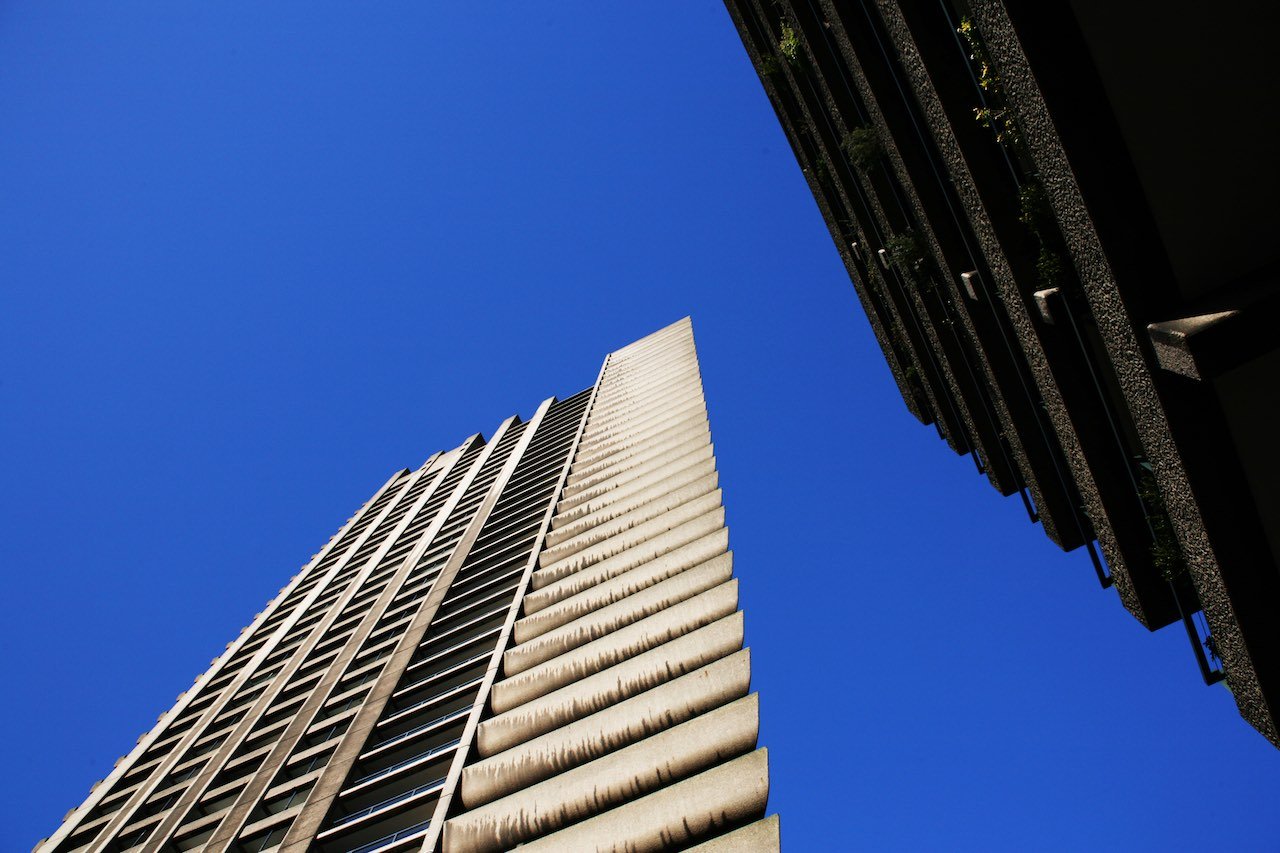 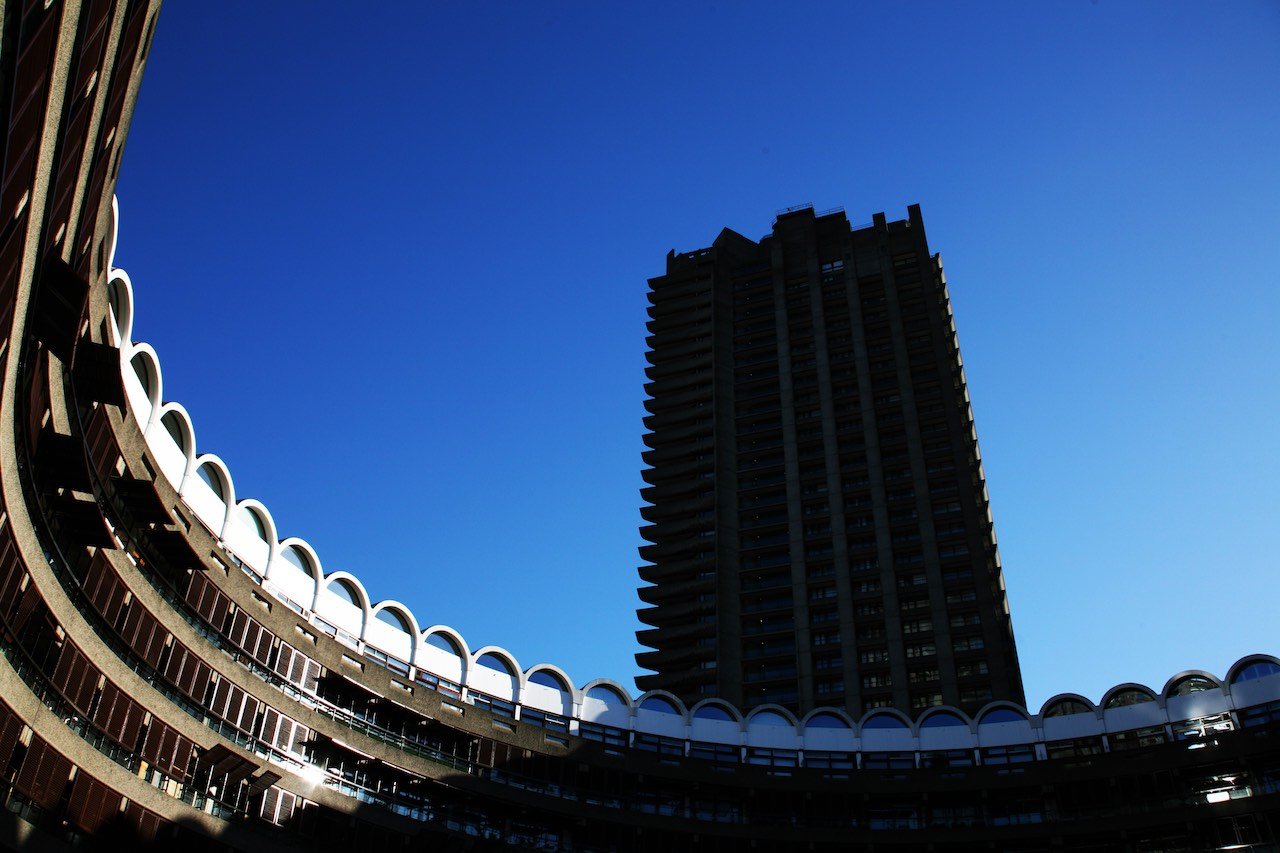 Brutalist buildings with civic purposes – Swiss Cottage Library being a prime example – have remained at the heart of some London suburbs. They have been adopted as suburban landmarks, loved by residents. Some merely (yet thankfully) exists because it is cheaper to keep them than replace them with an architecture-by-numbers glass monstrosity. Swiss Cottage Library is a beautiful, fanlike structure designed by Sir Basil Spence – master of mid-century Modernism – and its narrow concrete fins offer a lighter alternative to typical Brutalism. Bonus: as a library, it’s open year-round, so you can venture inside to marvel at its interior, too.

Going to London? The same team that brings you the content you love designs your perfect trip

Conceived in the 1960s by radical Hungarian architect Erno Goldfinger, one of London’s most infamous Brutalist architects, the Trellick and Balfron Towers are icons of the London skyline. Their unique design, with a service tower that connects every third floor, was a ground-breaking feat of engineering. The Balfron came first and is surrounded by smaller examples of British Brutalism. Again, like the Barbican, both are perfect examples of mid-century socialist housing that are now in-demand residences.

Neighbouring Robin Hood Gardens is less of a success story. Built by Alison and Peter Smithson, the sprawling metropolis of flats features broad walkways on a raised platform. It has been left to rot by housing associations, which is madness considering the current housing crisis London is struggling with. World famous architects have petitioned the government to both save the building and restore it to its former glory, but this might be one to explore as soon as possible. 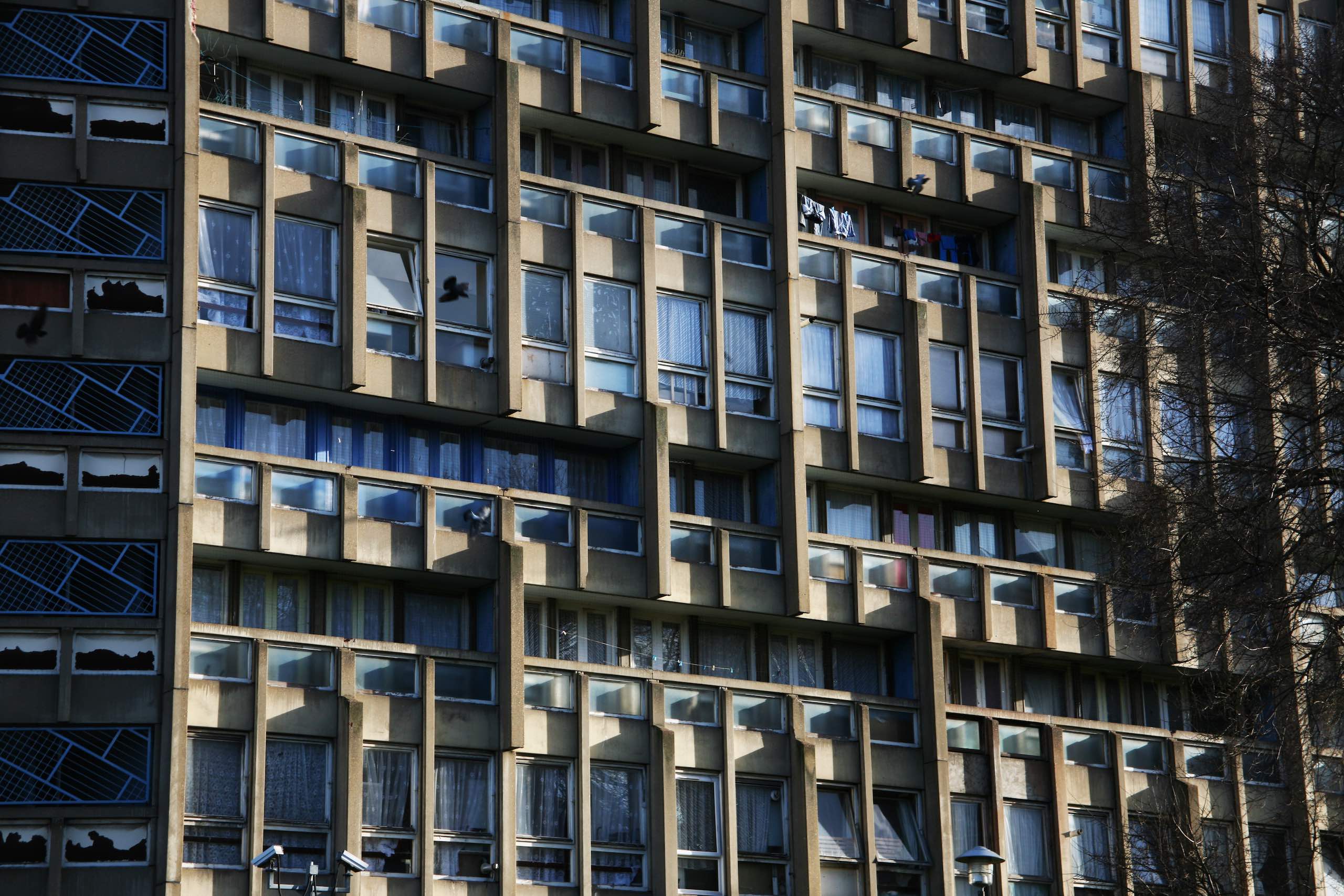 One Kemble Street - back from outer space?

One Kemble Street, previously (and now affectionately) called Space House, was designed by Richard Seifert, architect of Oxford Street’s imposing Centre Point skyscraper. One Kemble Street is a beacon of Brutalism amongst a sea of soulless structures in the Holborn Borough. It features dynamic, angular windows and Seifert’s iconic ‘Y’ shaped pillared base. It is tucked away behind Kingsway, Holborn’s artery, and to stumble across it on a summer’s day is an absolute pleasure. 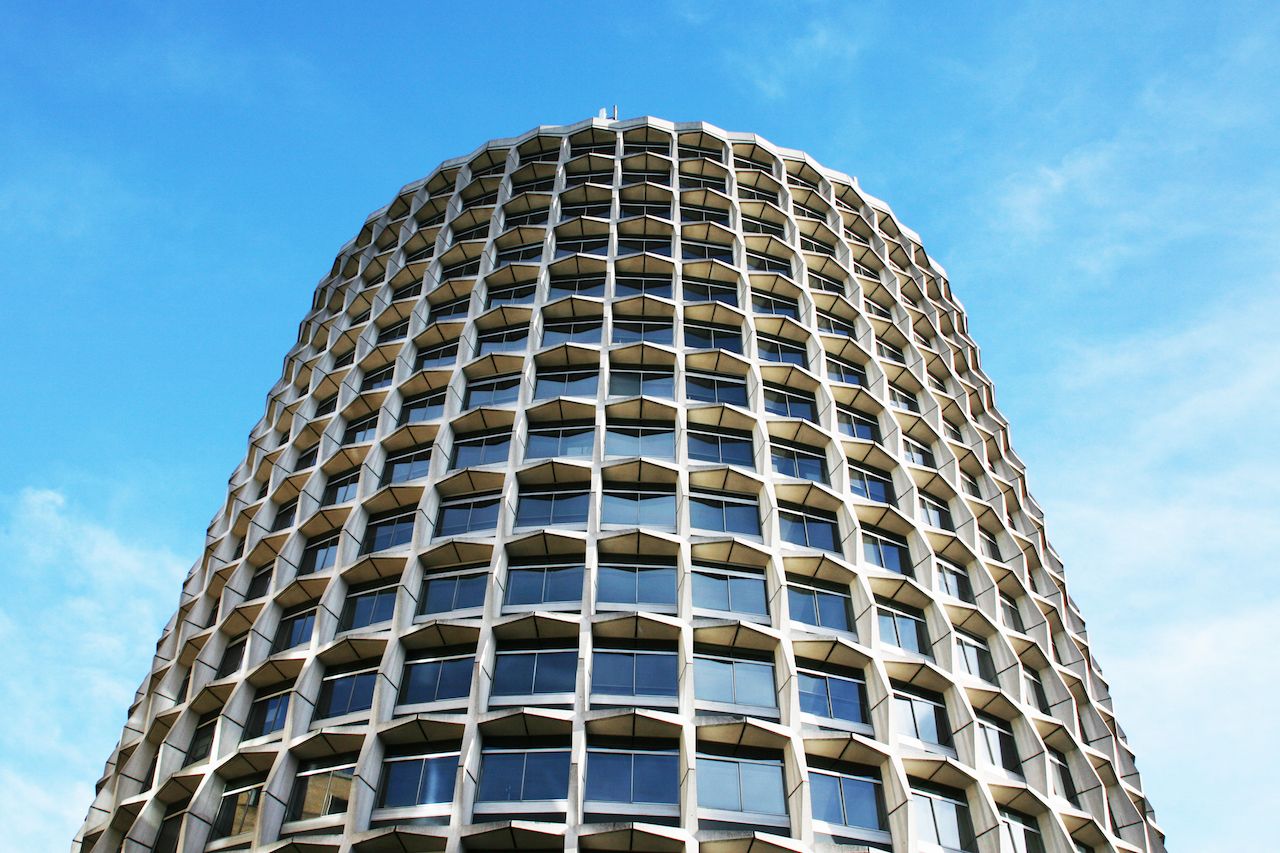 If only Sir Basil Spence knew now that his buildings were lauded with praise. Back in 1976, 102 Petty France was proclaimed an eyesore and often compared to the KGB’s Lubyanka. Charming. Today, though, she stands proudly at the side of 55 Broadway, a majestic Art Deco neighbour. 102 Petty France houses the Ministry of Justice, so, unfortunately, there’s no access to the public, but a wander around this concrete phallus, with its mushroom-like design and space-age geometric base, is a must for any Brutalism fanboy.

With over 500 flats, Alexandra Road is one of London’s largest and most intimidating estates. Her derrière, viewed from the Abbey Road end (yes, that Abbey Road) is a concrete ziggurat that was constructed to eliminate noise from the neighbouring railway lines, and even Brutalist loathers can’t help to marvel at the sheer scale of this construction. A walk through the estate itself allows visitors to enjoy the genius of its structure from the opposite side, with its steep, triangular walls and rows of identical apartments. The large, light apartments boast huge windows and traffic is restricted to the basement – a car park occupies the lower floor – providing safety for the estate’s residents. 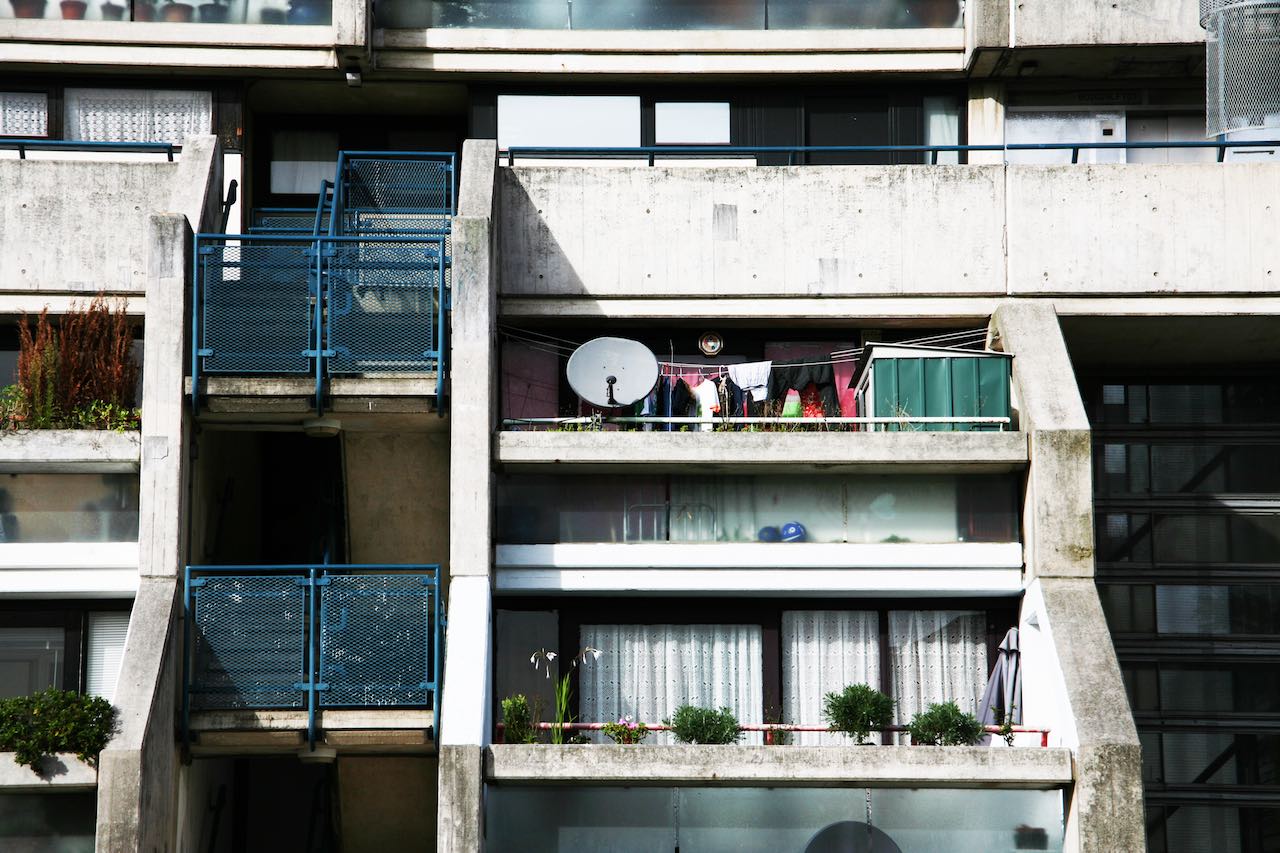 The Guildhall is the lightest and sexiest building on our list. It’s a wonderful example of how Brutalism can work in harmony with other architectural styles: the original Guildhall is a majestic 15th-century building, re-imagined in the 1780s with a Neo-Gothic style. The Brutalist extension, fancifully called ‘The West Wing’, is a hunk of glazed concrete with beautiful Y-shaped beams and an imposing bell-shaped entrance.

The Guildhall and its marvellous appendage are only open to the public during Open House weekend, as many of these buildings we’ve briefly explored are. Open House, usually the third weekend of September, sees many of London’s greatest buildings open their doors. It’s a must for architecture fans, whether you love Brutalism or not. 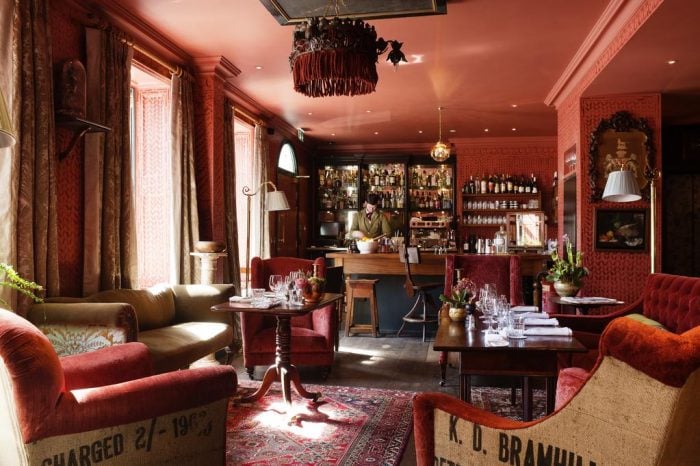 The Zetter Townhouse is a quirky Georgian townhouse hotel located on a picturesque cobbled square in Clerkenwell, and boasts an award-winning cocktail lounge. 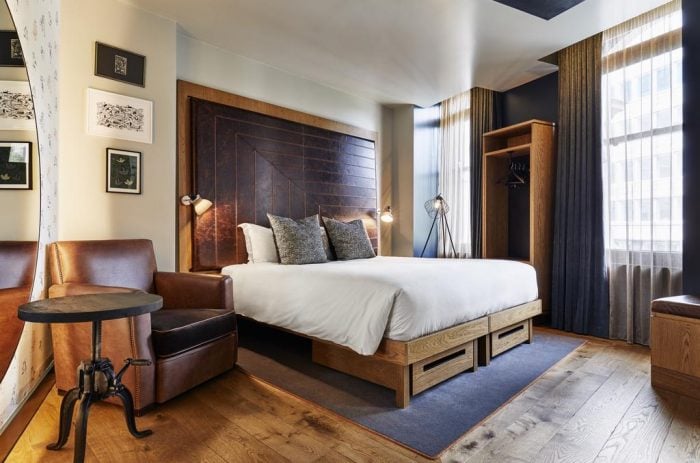 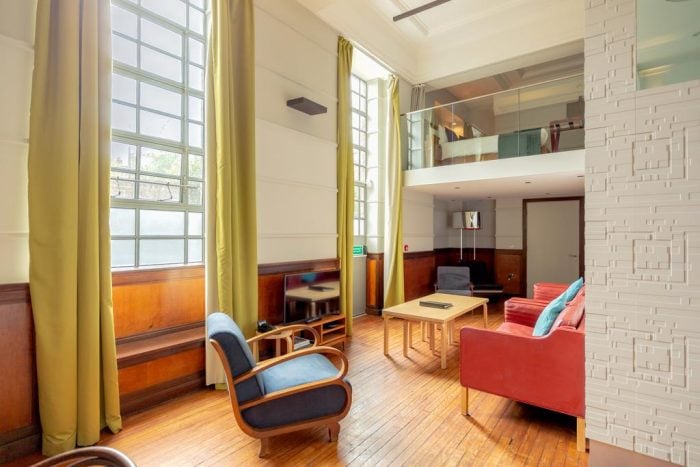 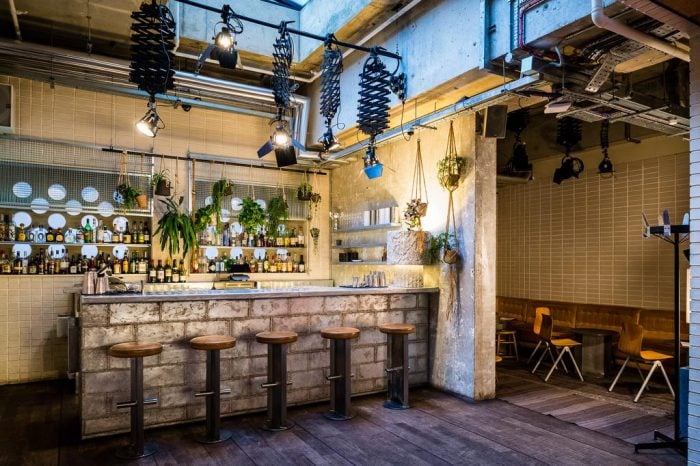 Ace Hotel London Shoreditch has a gym, a basement bar, a restaurant, and unique rooms designed with influences ranging from UK punk to bold graphic styles. 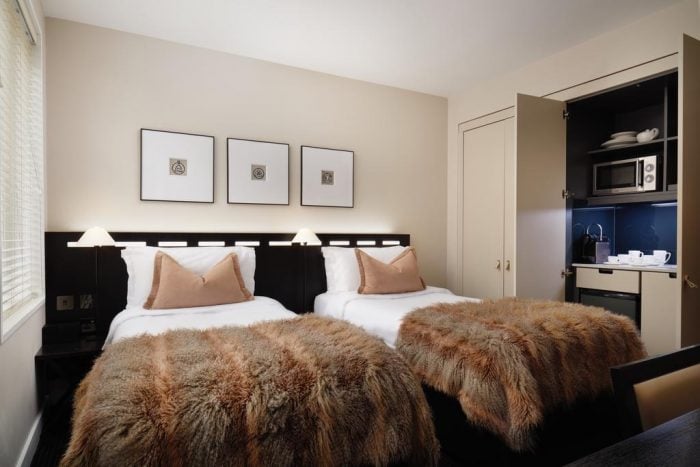 This central London hotel with minimalist rooms and well-equipped kitchenettes offers excellent value for its location, just off Soho Square, minutes from Theatreland and Wardour Street. 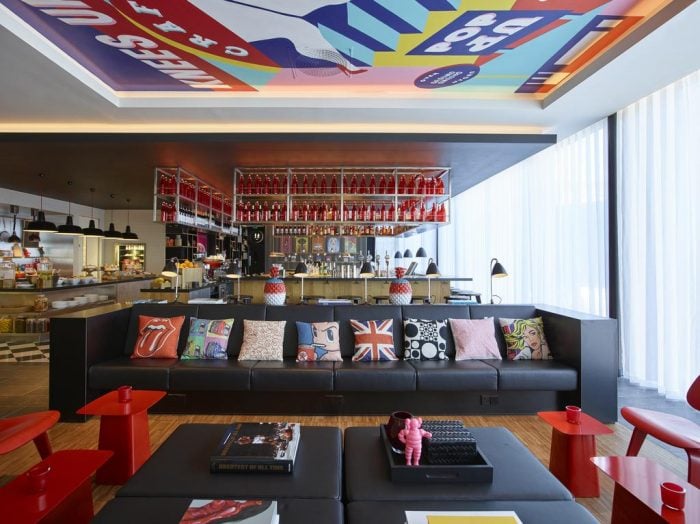 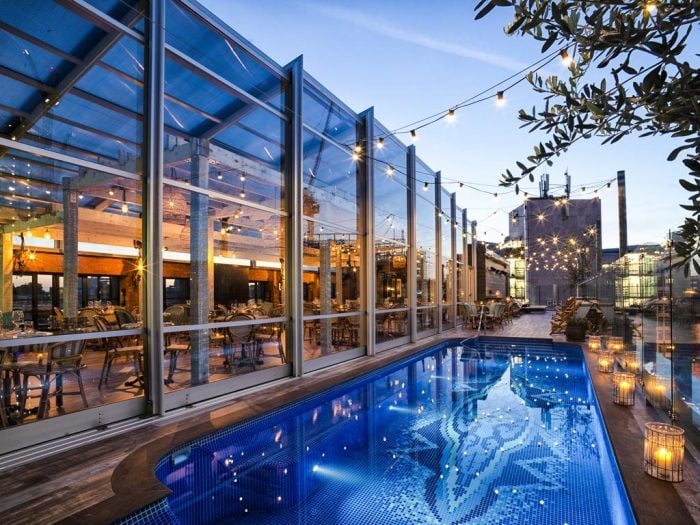 Featuring a fitness centre, The Curtain offers accommodation in London, 500 m from Hoxton Square. The hotel has a year-round outdoor pool and terrace. 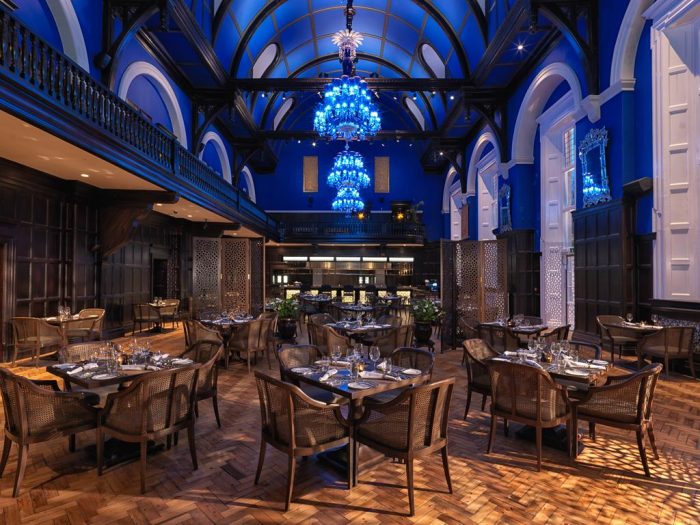 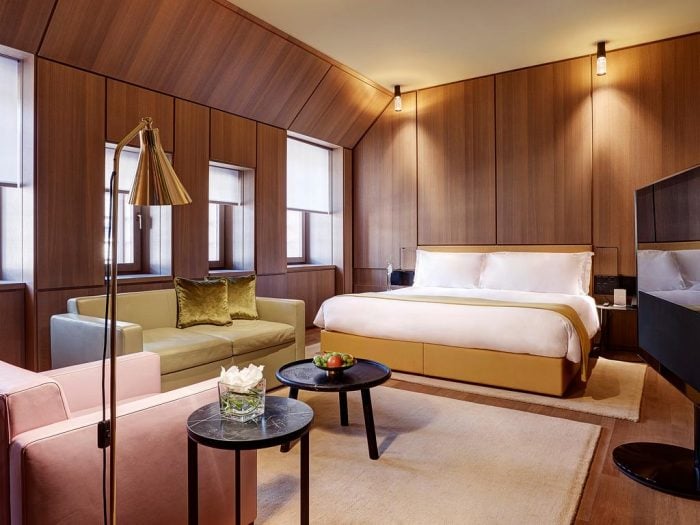 Hotel Café Royal is an iconic luxury 5-star hotel in the heart of central London. With the hotel situated to the South-West of Mayfair and Soho to the South, the property is positioned on Regent Street. 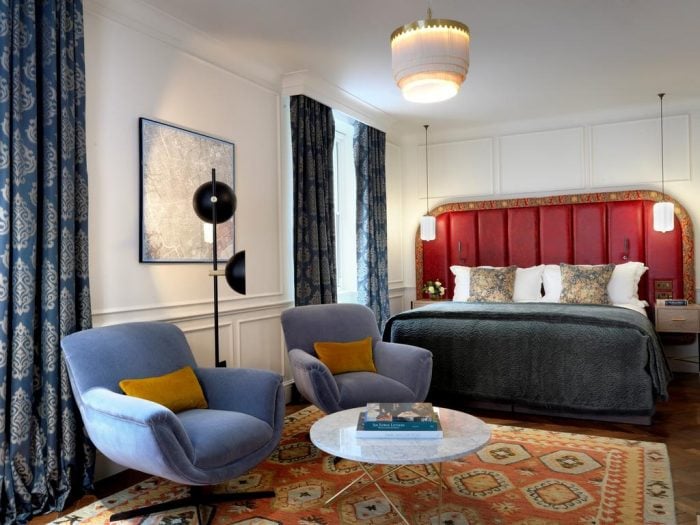 The Bloomsbury Hotel is located in the heart of the theatre district. Tottenham Court Road tube station and The British Museum are just 200 m from the hotel. 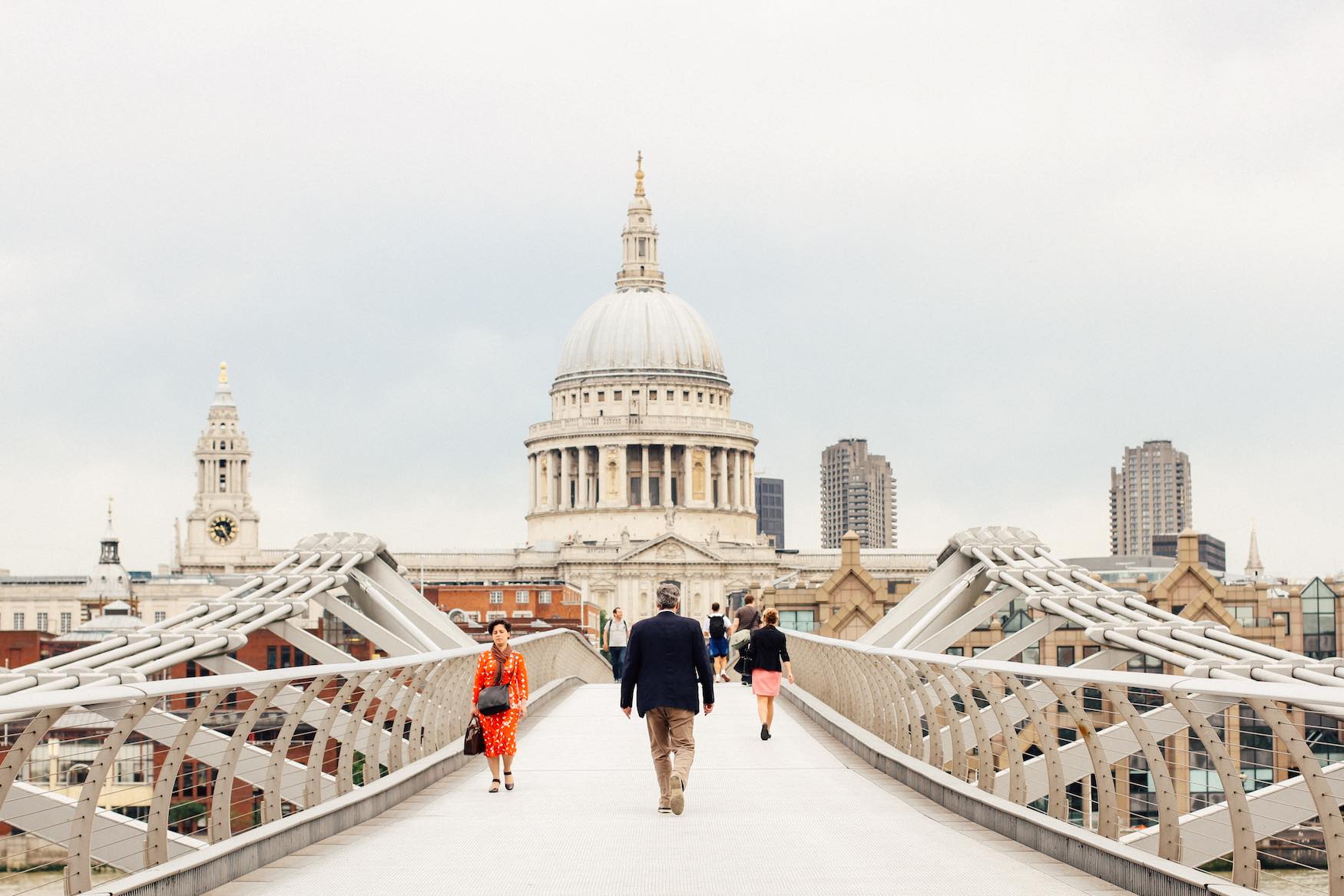 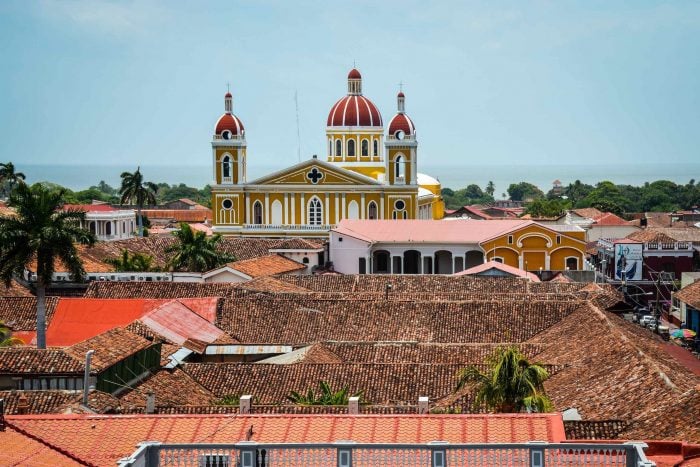 A throwback to old times, Granada is one of the most beautiful and oldest colonial towns in the Americas, in the heart of Nicaragua. 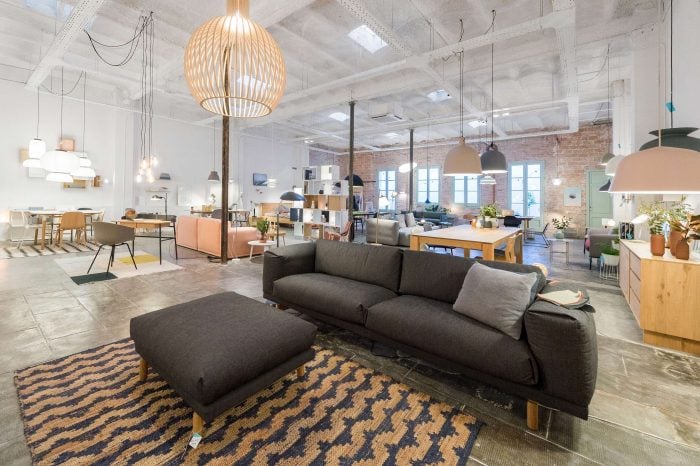 The best concept stores in Barcelona

In Barcelona, concept stores pay homage to all things design, not only as an aesthetic but as a cultured way of life.