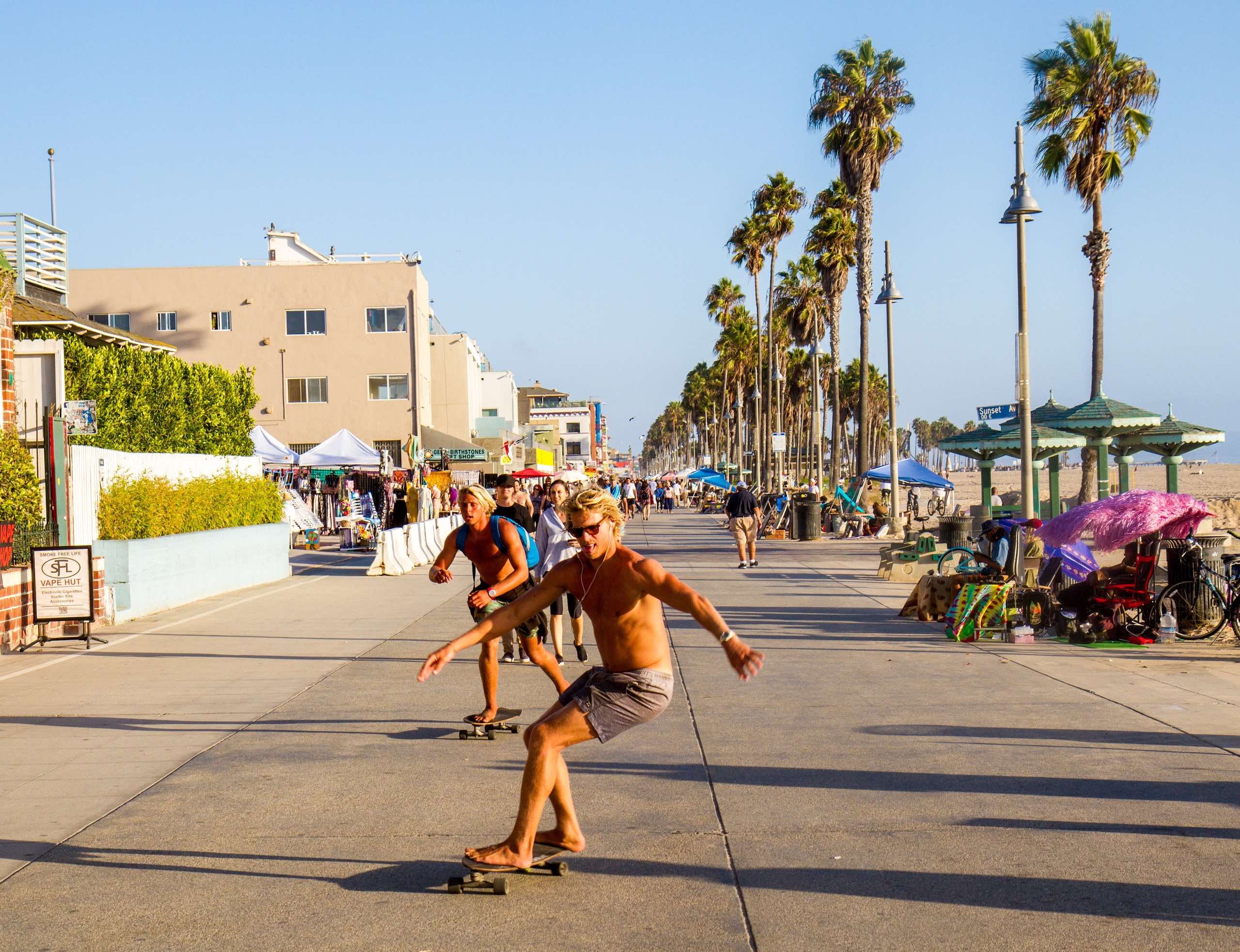 The 10 best gay things to do in Los Angeles

Stories > Experiences > The 10 best gay things to do in Los Angeles
Curation by Yasmina Rodríguez, words by Laura Tucker

A palm-strewn mirage on the southwest coast of California, Los Angeles is a city where dreams and a whole bunch of blockbusting pictures are made. Whether you wish to mingle with the rich and the famous on cocktail bar rooftops in Beverly Hills, hike dusty canyon trails to view the gridded city from afar, or experience the cutting-edge theatre scene of Downtown, Los Angeles provides it all, with perennially blue skies and endless beaches thrown in for good measure. While West Hollywood (WeHo) is undeniably LA’s gay epicentre, home of Gay Pride, Halloween Costume Carnaval and Outfest, there are countless other a gay-friendly things to do in Los Angeles, across the hip Silver Lake area, the hilly enclaves of Los Feliz, and the urban valley communities. Wondering about the best gay sightseeing in Los Angeles? Read Mr Hudson’s Los Angeles gay guide for insider information.

Go on a fabulous vacation planned just for you, and let us do all the work.

Just a moment away from the glitz of West Hollywood, Runyon Canyon offers a range of trails, all with unmatched views of the city and the freshest air for miles around

1. Style up at LA’s most fashionable stores

Going to Los Angeles and not indulging in some retail therapy is like going to the Alps and not skiing. Over in downtown, alongside hip new bars, restaurants and attractions, the shopping scene is thriving. Find the likes of Acne and A.P.C. over in Broadway or try the eclectic Arts District for an interesting selection of smaller boutiques such as Alchemy Works and Apolis, alongside great food and coffee joints. As well as offering an ever-growing number of commercial offerings from local brands and LA extensions of chic brands such as Shinola and Malin + Goetz, you’ll also find alternative culture-minded stores unique to the city. Head on down to 3rd Street and One Santa Fe, making sure to wander off the beaten path to find the area’s best hidden gems.

2. Get sweaty with hiking and yoga at Runyon Canyon

To assuage any guilt you might feel at tapping out your credit card, our next activities won’t have you spending a dime. Head out early to experience Hiking and Free Yoga at Runyon Canyon, blending breath-taking nature with low-impact exercise, allowing you to reach that La La Land state of bliss among a group of like-minded, Lycra-clad individuals. Just a moment away from the glitz of West Hollywood, Runyon Canyon offers a range of trails, all with unmatched views of the city and the freshest air for miles around.

3. Sun yourself on the best gay beach in LA

Another natural attraction in our sights is the Will Rogers State Beach, home to the only gay beach within LA’s city limits. Affectionately referred to as ‘Ginger Rogers’ and accessible via the Santa Monica Blue Bus 9,  Will Rogers State Beach is the go-to place for the WeHo crowd to enjoy the sea breeze and bliss out under the sun on weekends and warm days (i.e. all year round!). This stretch of beach is a lengthy one, so if you’re looking for the boys and some open-minded fun, get yourself to 14801 Pacific Coast Highway. 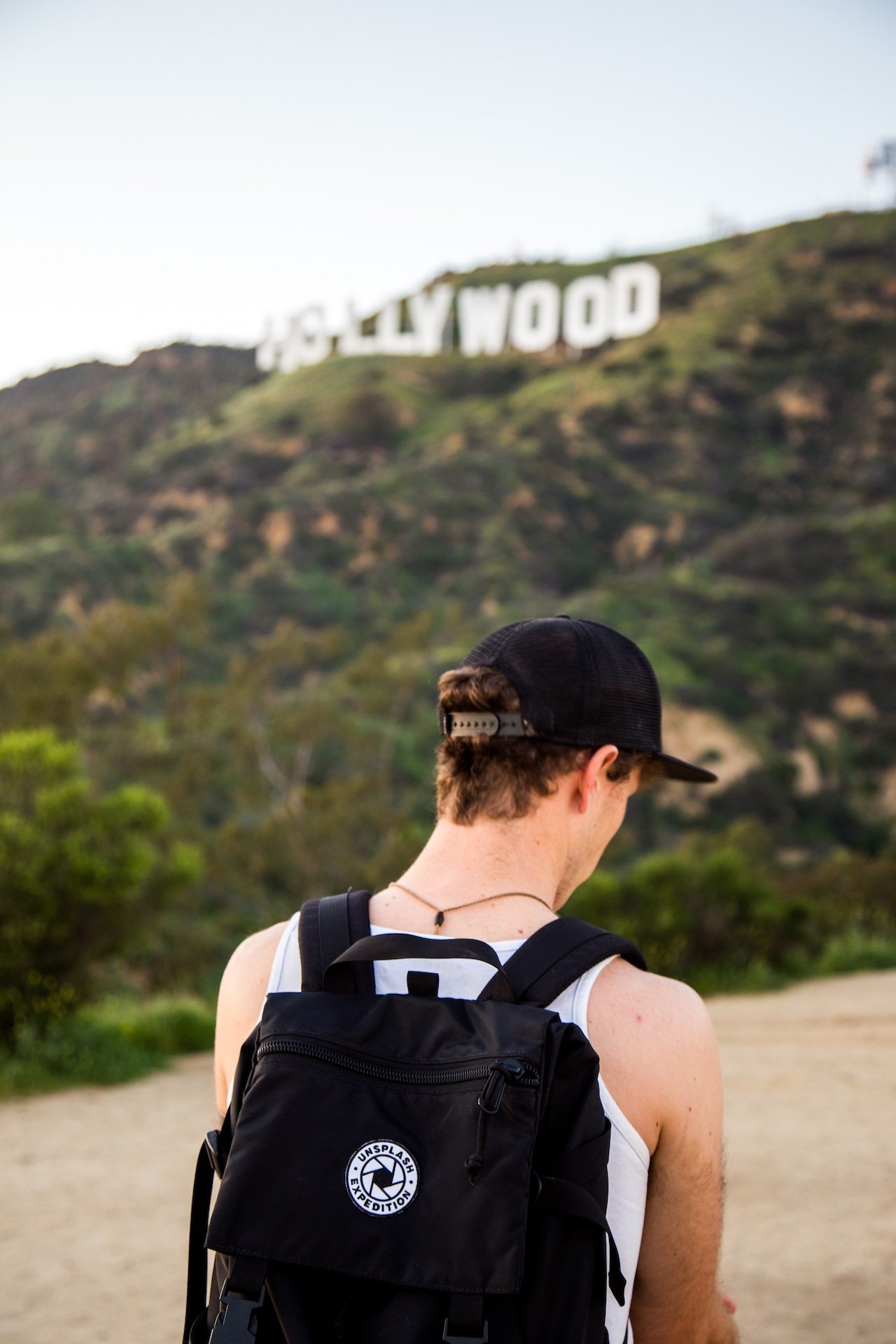 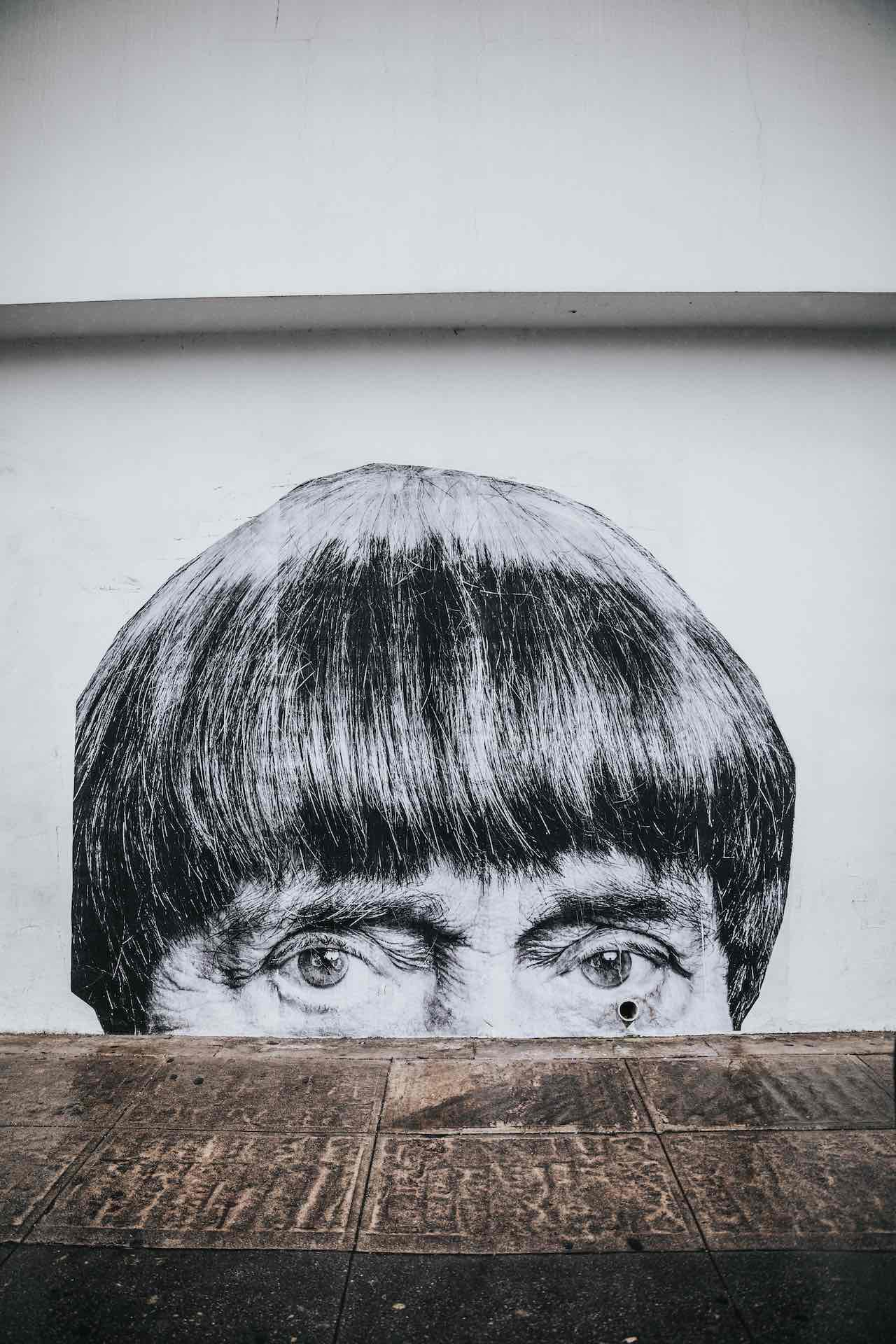 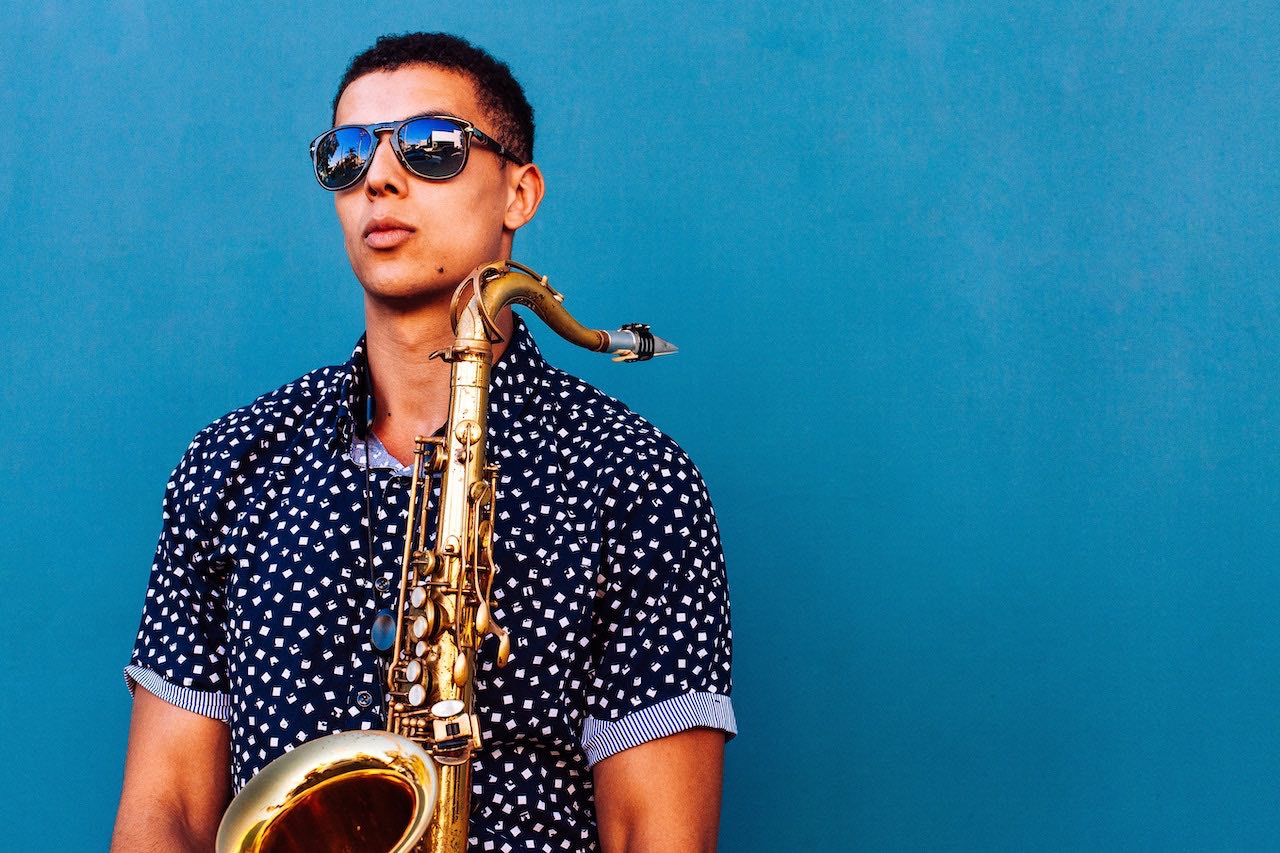 Since its opening in 1969, the L.A. Gay & Lesbian Center has been supporting and championing the rights of the LGBT community across LA and beyond. With a huge network of 600 employees, the centre caters to more LGBT people than any other organisation in the world, offering programs and services that span health, social care, housing, culture, education, leadership and advocacy. Working to build a better world by fighting bigotry, the centre is a key institution in making LGBT individuals and families equal, healthy and complete members of Californian society. Our next LGBTQ-centred attraction is quite a mouthful, named the ONE National Gay & Lesbian Archives at the University of Southern California (USC) Libraries. A one-of-a-kind gallery and exhibition centre in West Hollywood, ONE Gallery is home to the world’s largest repository of LGBTQ materials, hosting regular events and ever-changing exhibits of the subject of everything related to the world of LGBTQ.

5. Attend a screening at a famed Hollywood theatre

Top off a perfect day in Hollywood with a performance or screening at The Theatre at Ace Hotel. Since its foundation as a film studio in 1927 by legendary stars Mary Pickford, Douglas Fairbanks, D.W Griffith and Charlie Chaplin, The Theatre and Ace Hotel has stood as a true Hollywood institution. Now restored as a three-storey, 1,600-seater cathedral to the arts, with a vast lobby, ornate balcony area and glimmering vaulted ceiling, this grand theatre hosts large-scale performances worthy of such grandeur. From rock and roll concerts and major movie premieres to world-class dance performances and one memorable finale of RuPaul’s Drag Race, The Theatre hosts it all, making use of cutting-edge lighting, sound and projection technology for the ultimate theatre experience. Alternatively, get some belly laughs in at The Laugh Factory, one of LA’s most renowned comedy clubs, where, over the years, the stage has been graced by numerous comedy greats, including LGBTQ legends and allies Ellen DeGeneres, Wanda Sykes and Kathy Griffin, as well as emerging talents. 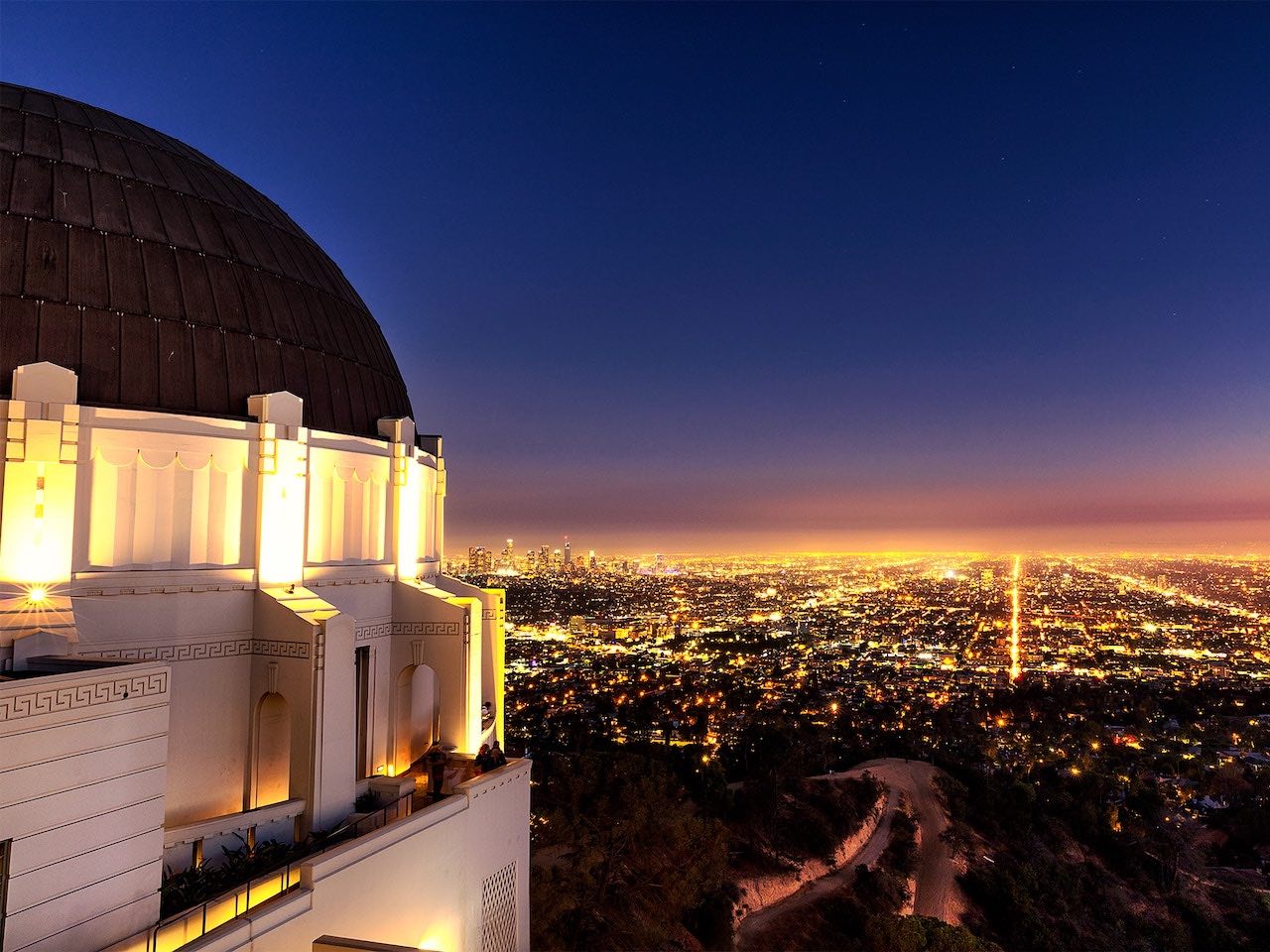 When it comes time to refuel, Los Angeles is not short of fabulous dining options. Skyward of Melrose and San Vincent, retractable rooftop restaurant Catch LA is the epitome of LA glamour. Serving up seafood and Asian specialities influenced by world flavours, Catch LA also provides inspiring views that cover everything from the Pacific Design Center to the Hollywood Hills, and even to Downtown on a clear day. Speckled with blooms throughout the walkway and dining area, the restaurant’s bright aesthetic is matched with rustic features and exposed walls, with an open kitchen to view the preparation of the chef’s a la carte brunch waffle towers, salmon-belly Carpaccio appetizers and fresh seafood mains. For dessert, there are seasonal sorbets to share and, for a boozy accompaniment, the drink’s menu offers almost any spirit under the sun; the mescal cocktails being particularly on-trend.

Going to Los Angeles? The same team that brings you the content you love designs your perfect trip

7. Revel at one of the most famous gay bars in LA

For a watering hole with a nice bit of gay-centric history, the top place to go is The Black Cat, a Silver Lake gastropub that predates Stonewall. On New Year’s Eve of 1967, the Black Cat Tavern was raided, with gay revellers being arrested by police. What followed was a series of peaceful demonstrations against police brutality all taking place outside the tavern. Today the venue stands as an upscale eatery and bar, serving elevated American comfort food and a popular boozy brunch to a diverse Sunset Plaza crowd among artsy motifs and tufted booths.

8. Dance the night away at LA gay bar Akbar

Another noteworthy LGBTQ venue for a cocktail or two is the popular chill-out spot and gay bar known as Akbar. Trendy yet unpretentious with Moroccan-themed interiors and plush couches, Akbar offers a laid-back setting for a diverse customer base ranging from business consultants to drag queens. Enjoy the jukebox hits any day of the week, or come on weekends for a rather more raucous dance club vibe. The Full Frontal Disco and Bears in Space are two regular events you’d be a fool to miss. 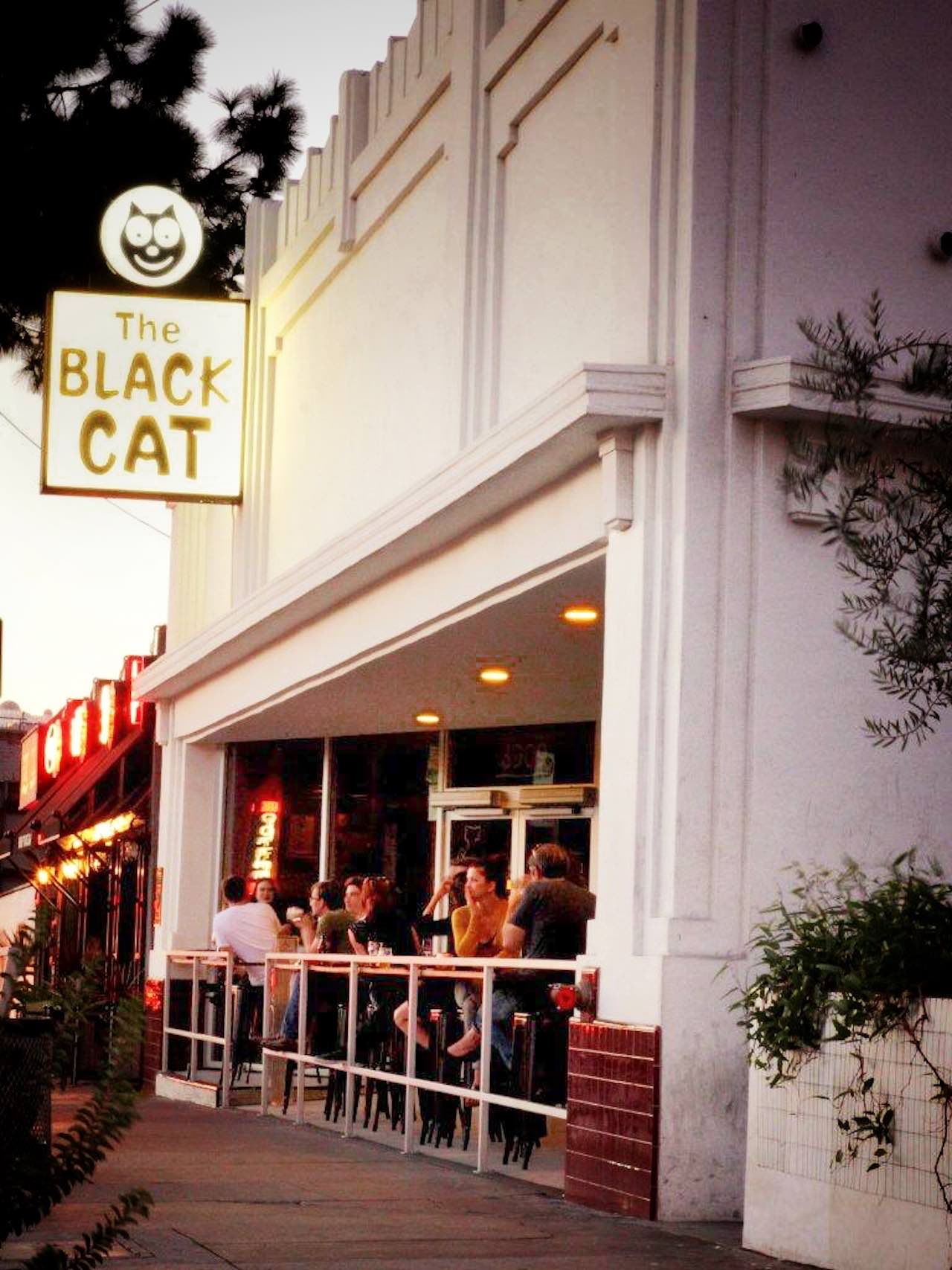 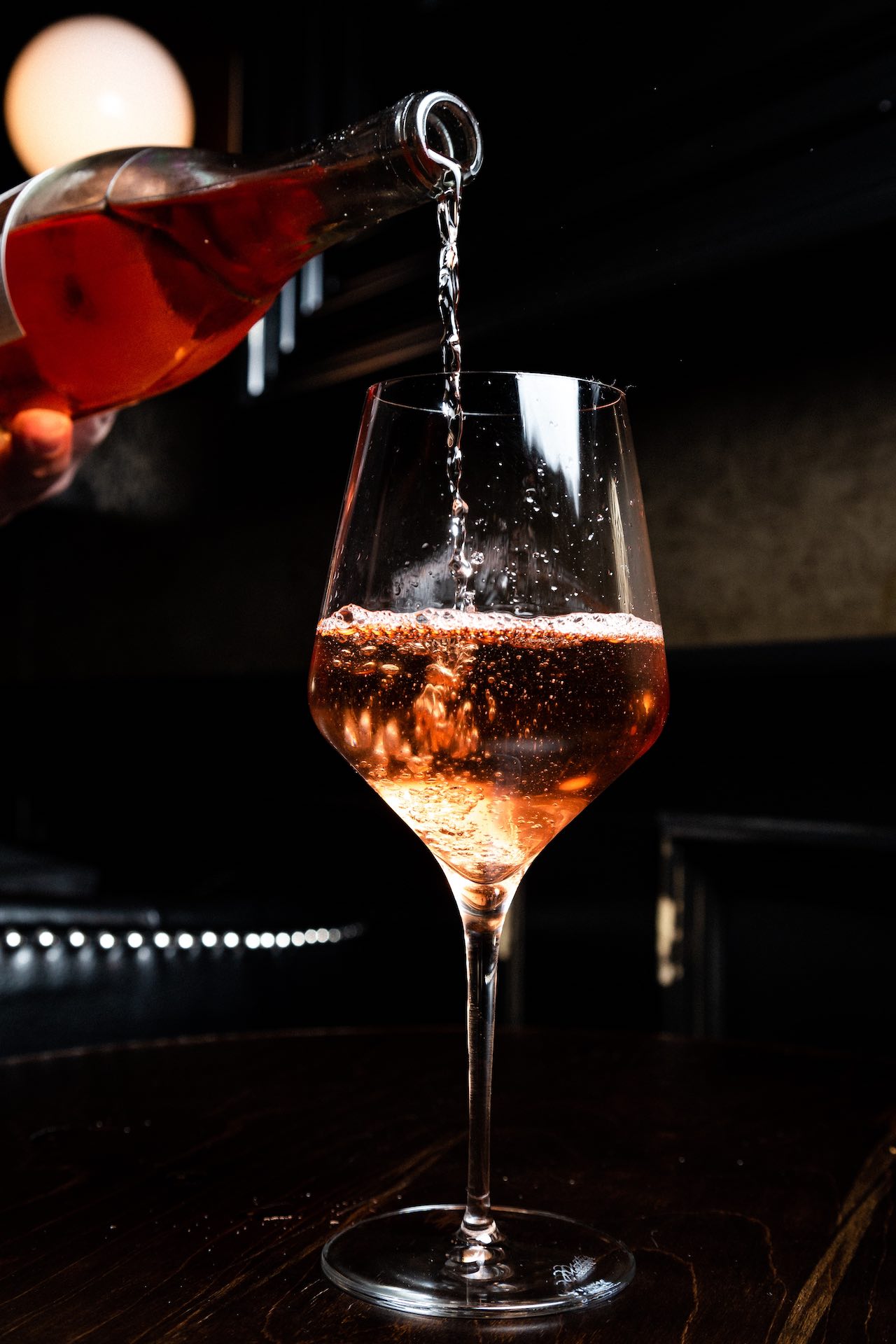 9. Take to the streets for LA Pride Festival

Of Los Angeles’ best seasonal gay events, LA Pride Festival, of course, takes the biscuit. This annual event held in June is the biggest queer event in the city, running for as many as 40 years, consistently championing equality, diversity and inclusion citywide. Join the thousands in the main march and, after, enjoy the variety of Pride-themed club nights, where the influx of gay travellers from across the world make for an epic night to remember. Other side events include cultural gatherings, speeches, movie screenings, pool parties and more.

After recovering from June’s glitter-covered Pride Parade, July arrives with another unmissable calendar event. Outfest Los Angeles LGBTQ Film Festival is exactly what you’d expect and so much more, a pinnacle event for the gay community in Hollywood, particularly for movie buffs, actors and industry members. Founded in 1982 by UCLA students, Outfest leads the state in promoting LGBTQ voices and stories on screen. Spanning eleven days in July and featuring over 150 movie screenings to audiences of over 40,000, Outfest Film Festival is considered the world’s preeminent LGBTQ film festival, making use of Hollywood’s exclusive and historic theatres, including the remodelled outdoor Ford Theater and REDCAT (Disney/CalArts Theater). 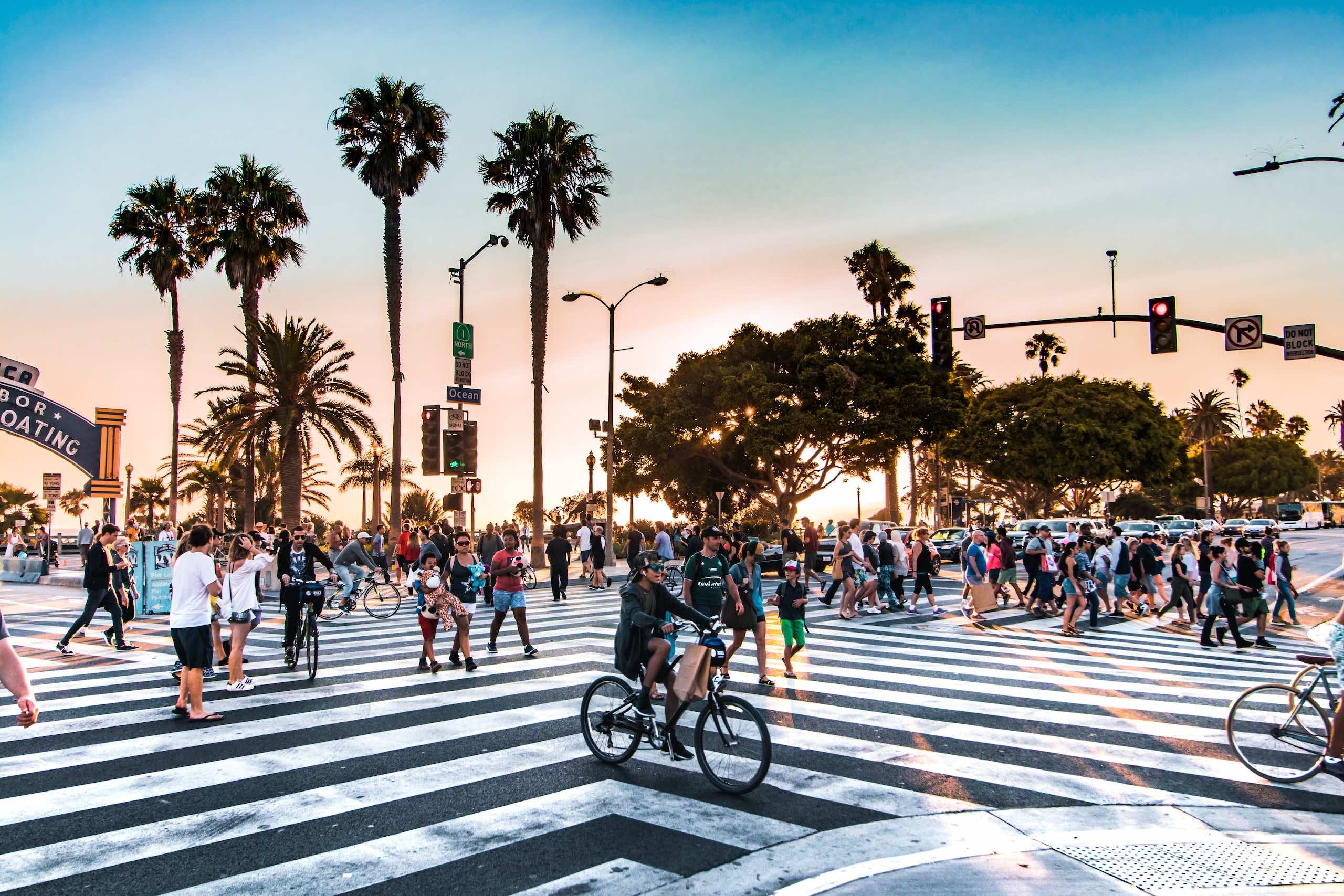 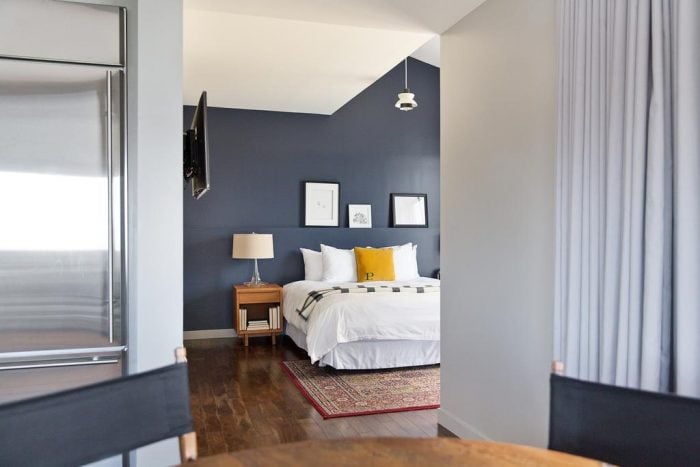 Just moments from the Sunset Strip, this hotel offers spacious suites with full kitchens as well as a delicious on-site restaurant in West Hollywood. 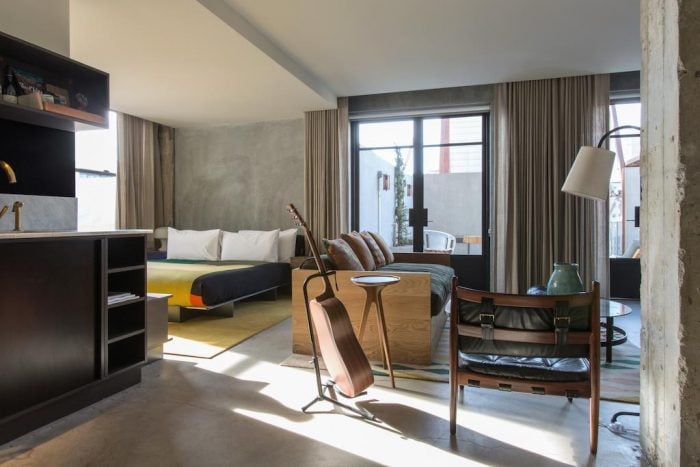 Located in the historic United Artists Building in the heart of the Los Angeles city centre, this LA hotel boasts a rooftop pool with fabulous views. 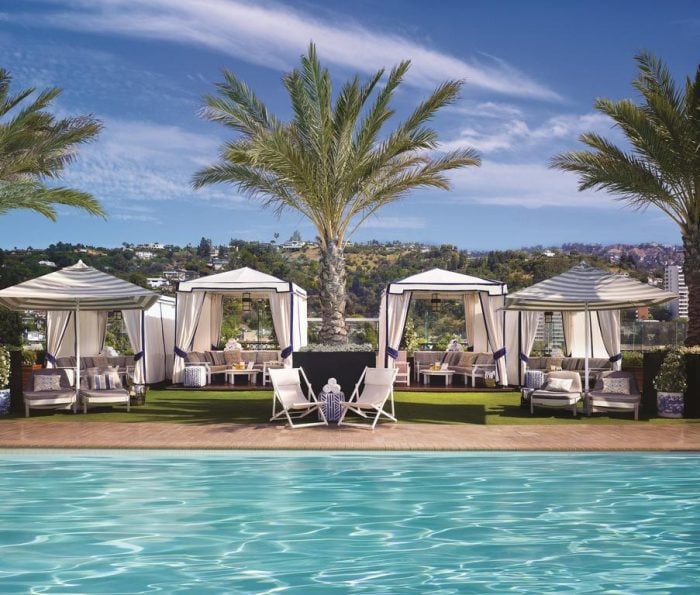 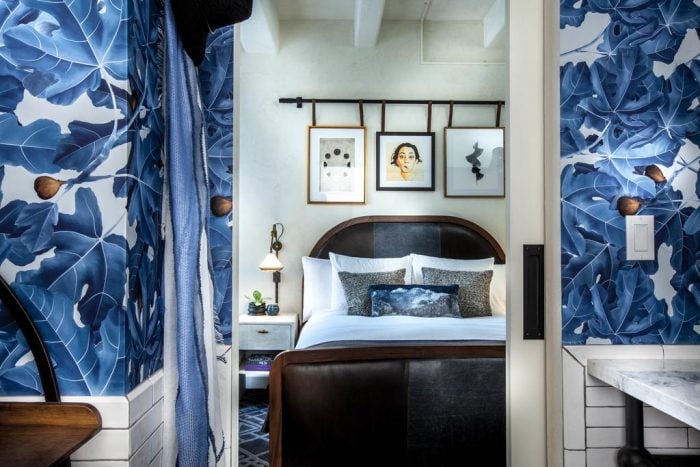 Offering a tranquil outdoor pool and an on-site restaurant, Hotel Figueroa is the only luxury, independently owned hotel in downtown Los Angeles. 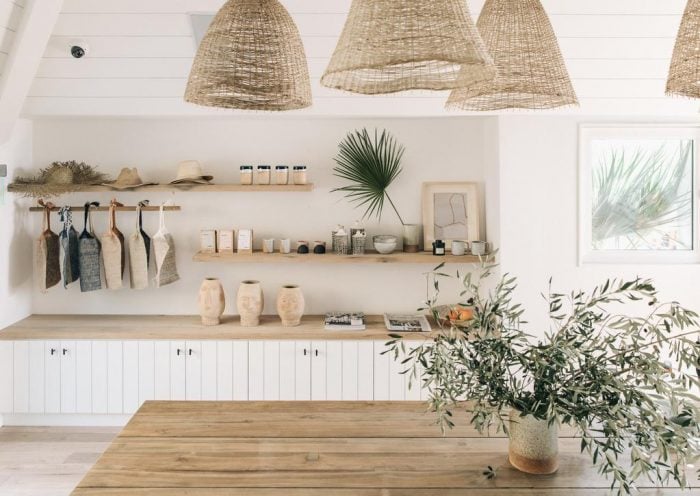 This property is 2 minutes walk from the beach. The hotel is set directly across the street from Surfrider Beach, on the iconic Pacific Coast Highway. 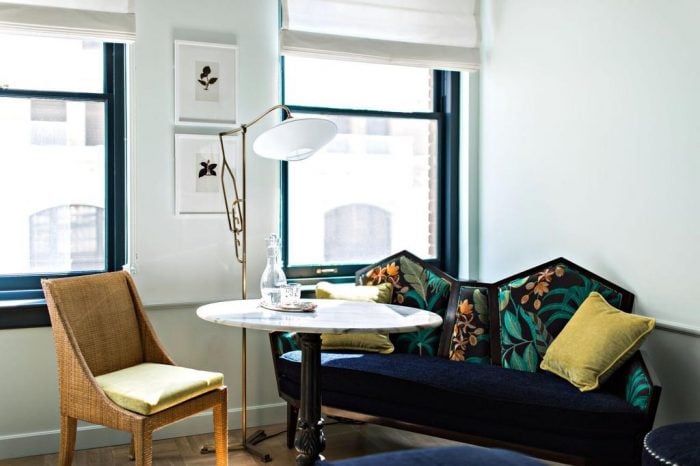 Located in Downtown LA, this hotel features several on-site dining options and a rooftop pool. All rooms feature original artwork from a Paris-based design studio and are dressed in custom-designed furnishings and luxury linens. 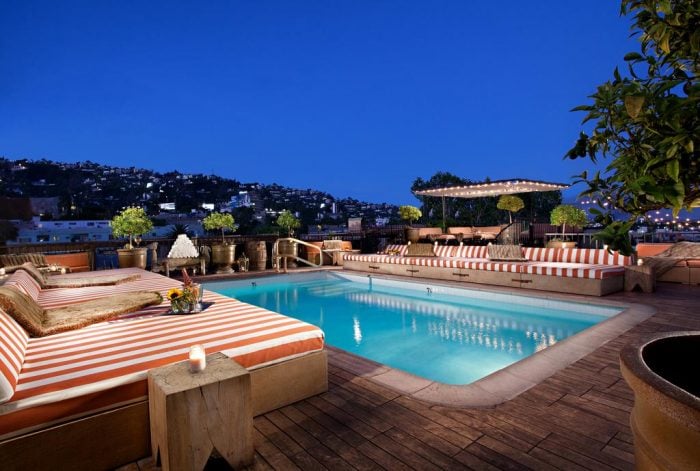 Offering a private rooftop with stunning views of Los Angeles, a saltwater pool and comfortable indoor/outdoor seating, this elegant 4-star hotel is within one kilometre of the Sunset Strip. 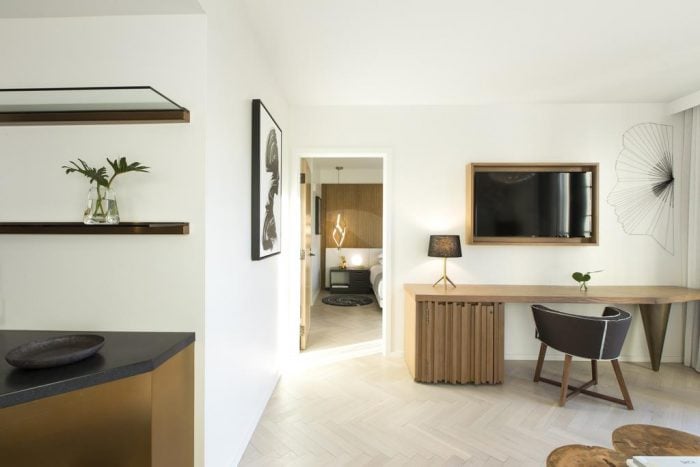 This artisan hotel is located on a tree-lined side street in West Hollywood’s Design District. It offers an on-site restaurant and a pool for guest relaxation. 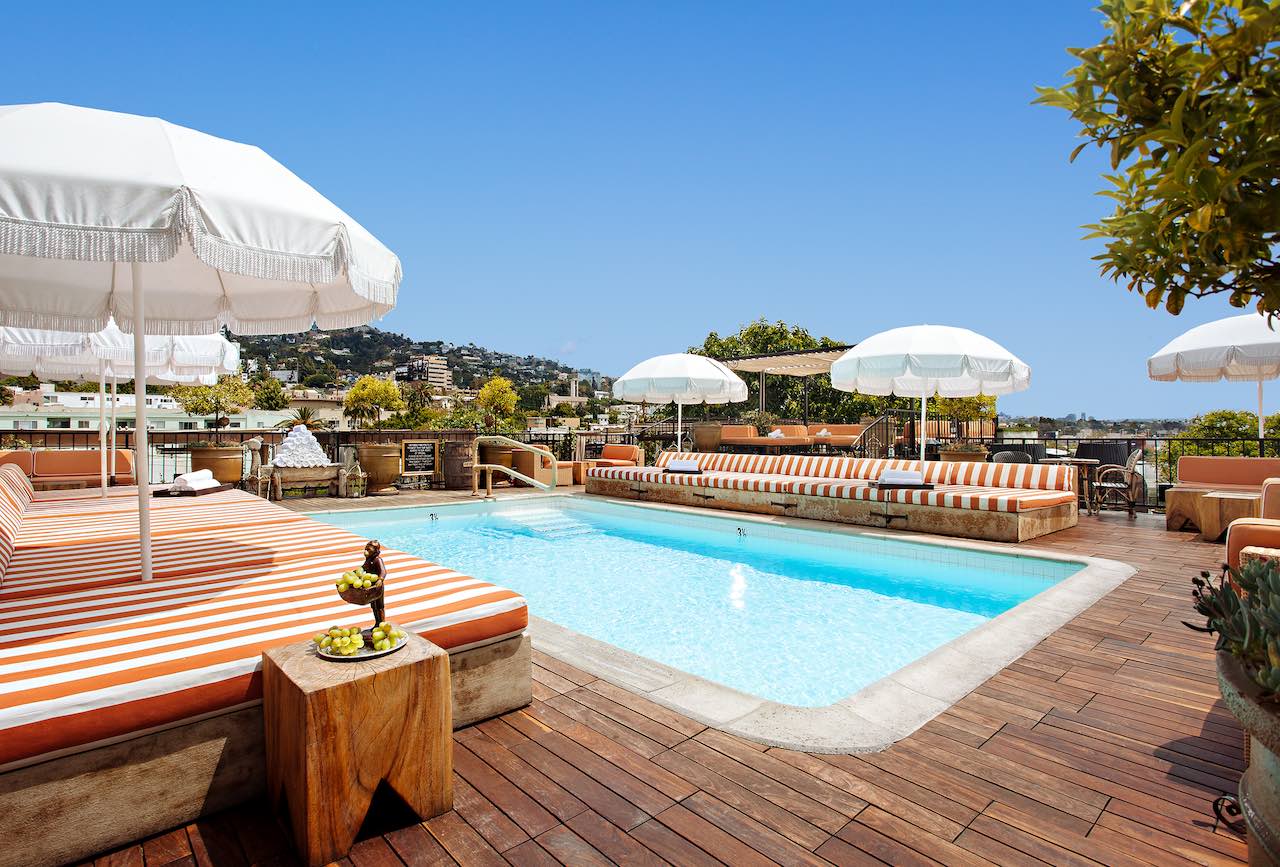 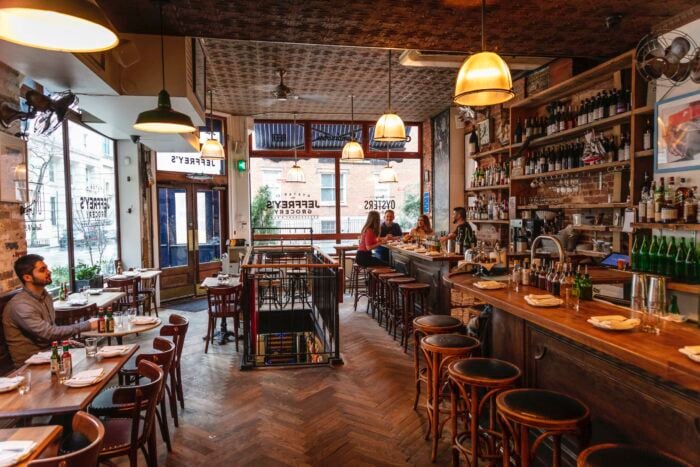 New York West Village holds onto its artsy ways with countless indie bookstores and cafés tucked away on cobbled streets, but also, there’s a growing number of fancy restaurants. 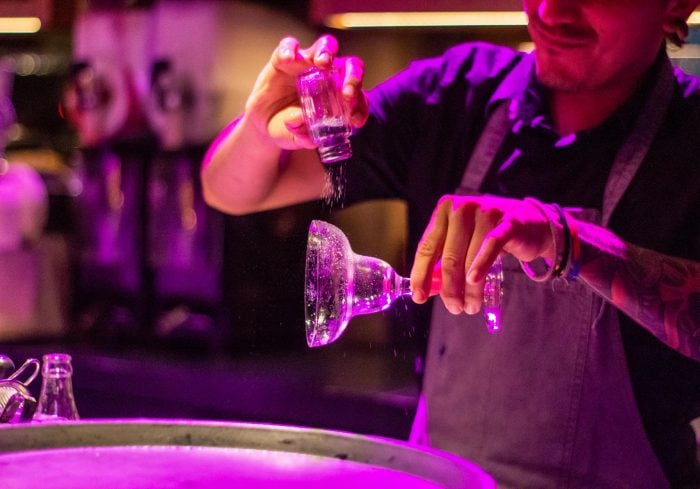 The best gay bars in Houston

Gay Houston is thriving, especially in Montrose; this is the epicentre of Houston’s gay nightlife where you’ll find a delightful array of gay bars, vintage shops, and cool cantinas.