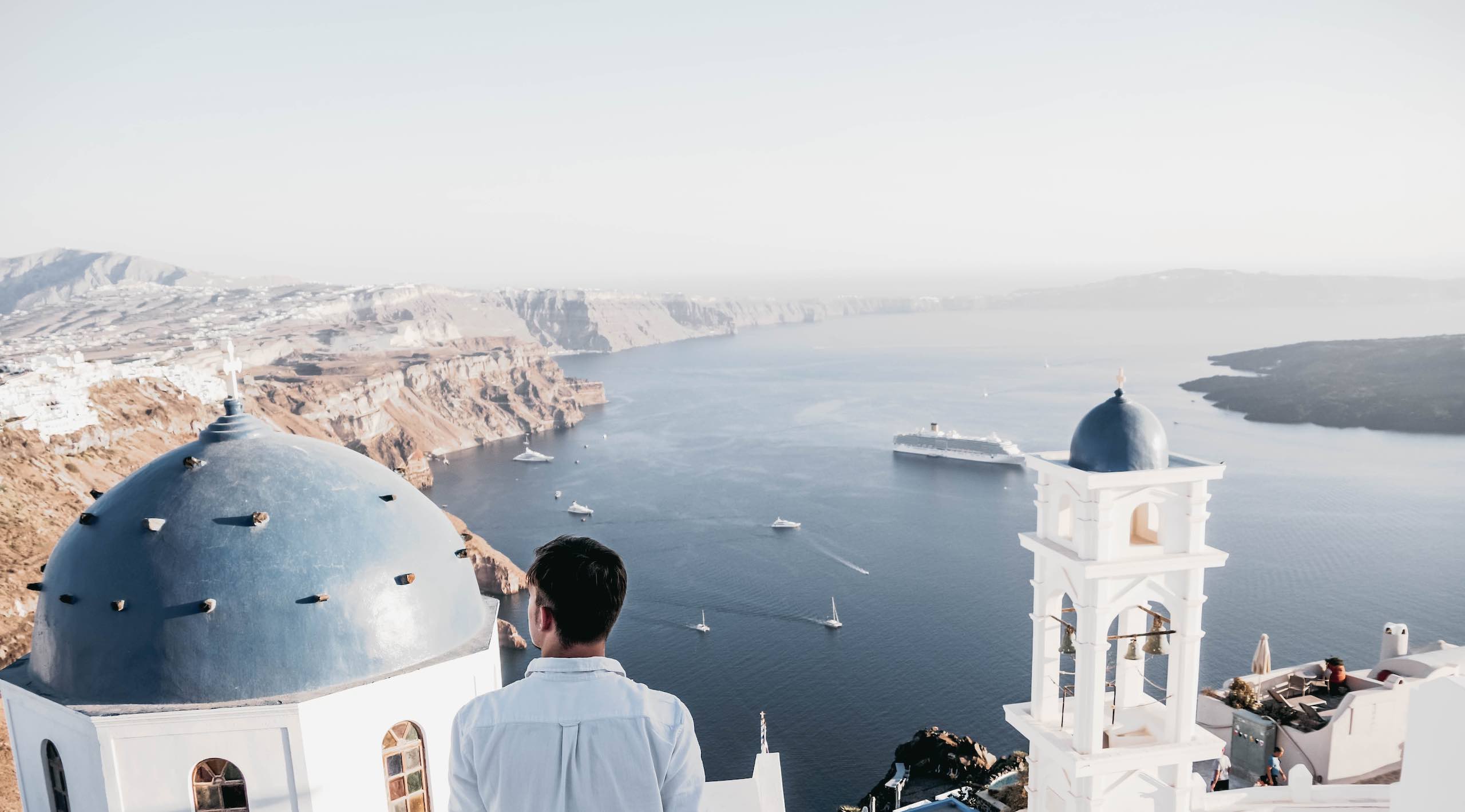 With sleepy sun-bleached villages, dazzling white-sand beaches, and a rich cultural heritage laced with fascinating mythology, the Greek Islands are as intoxicatingly dreamy as the famed reputation that precedes them. But with some 200 inhabited islands—many of which are surprisingly unique in their scenery and vibes—which are the best for a gay Greece getaway? Drift off to the gentle lapping of the mesmerizingly blue Aegean Sea at these gorgeous, Mr Hudson approved gay-friendly Greek Islands.

Cosmopolitan Skiathos has long beckoned fun-loving travellers in search of both spectacular scenery and riveting nightlife—and after hosting the first International Gay Culture Festival a few years back, Skiathos is now more gay-friendly than ever. Arguably home to some of the most lovely pine-fringed beaches in all of Greece, the most fitting way to start your Skiathos exploration is with your toes burrowed deep in the sugar-fine sand. There are over 50 beaches to choose from, with Big Banana and Little Banana taking the prize as most gay-popular. For sunset, it’s hard to beat the views at Agia Eleni Beach. Lalaria (sea access only), Koukounaries and Vromolimnos are all also worthy contenders for Skiathos’ most famed sandy spots. Take a round-the-island boat cruise to access Skiathos’ hidden coves and sea caves, or grab your mask and fins for an underwater encounter with reefs and wrecks.

Arguably home to some of the most lovely pine-fringed beaches in all of Greece, the most fitting way to start your Skiathos exploration is with your toes burrowed deep in the sugar-fine sand

Skiathos’ most prized architectural gem is the 18th-century Evangelistrias, a beautiful monastery renowned for its role as a safe haven during late Ottoman rule. Evangelistrias also marks the start of a scenic loop-hike past country chapel and dramatic coastal scenery. Another marvel is the Skiathos Castle, tucked away on the north side of Skiathos. Visit the ruins for a glimpse into Skiathos’ medieval past, or to simply take in the awe-inspiring views. Back in the centre of Skiathos is picturesque Old Town; the quaint maze of cobbled streets and vibrant bougainvillaea are everything you imagine the Greek Islands to be (and more.) 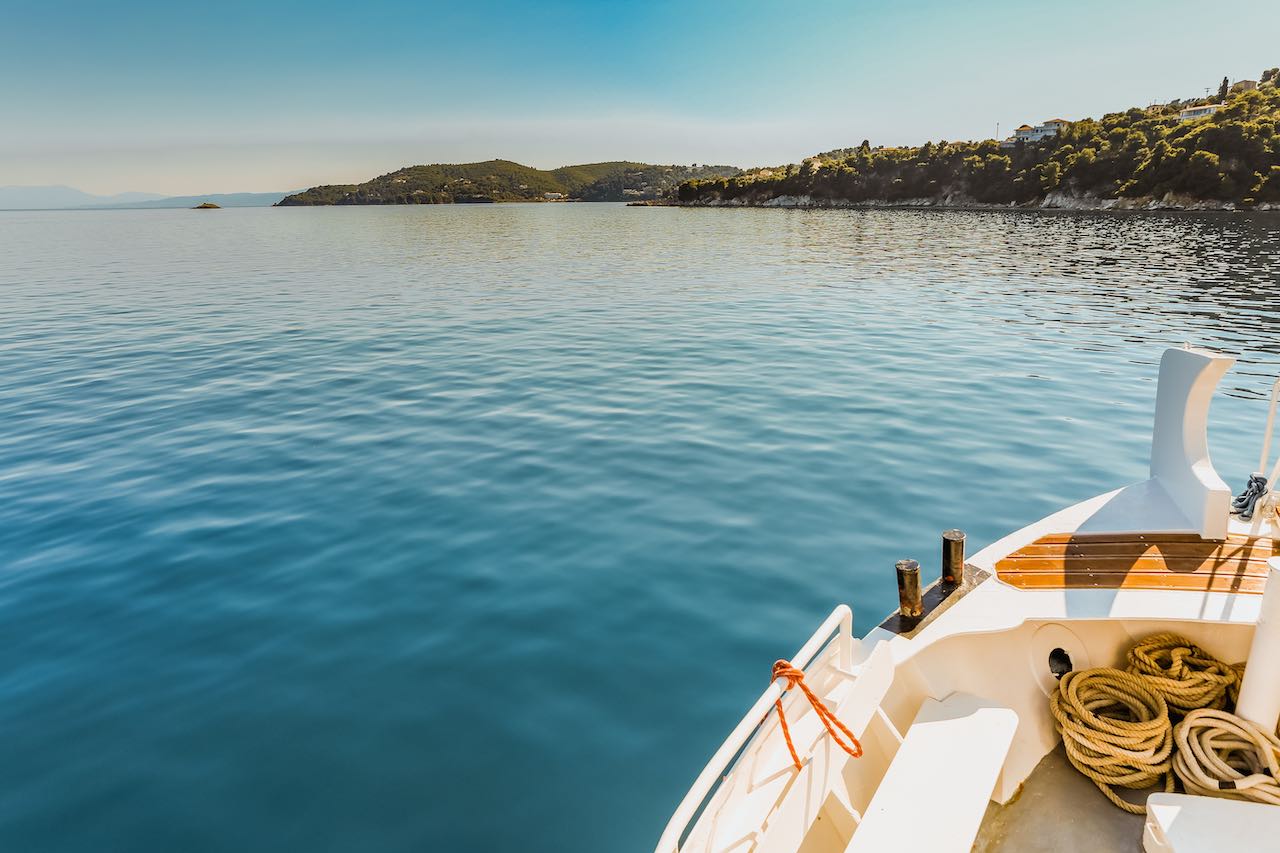 Where to stay: Adults-only Aegean Suites Hotel weaves understated elegance with traditional architecture for a stay that is entirely befitting of any gay Greece getaway. The sea views are some of the island’s best, and some suites take the luxe factor to the next level with open-air whirlpool tubs.

Few places are as unapologetically fun as Mykonos, dripping with decadent excess, glitzy boutiques, and world-class nightlife. And while the free-spirited island has undoubtedly peaked in popularity over the years, Mykonos hasn’t lost her bohemian, open-minded ways. Gay Mykonos is many things—boring is never one of them. For one of the world’s most popular gay festivals, time your Mykonos visit over the last two weeks of August for the XLSIOR Mykonos International Summer Gay Festival. Expect outrageously epic outdoor parties with the hottest DJs from around the globe. 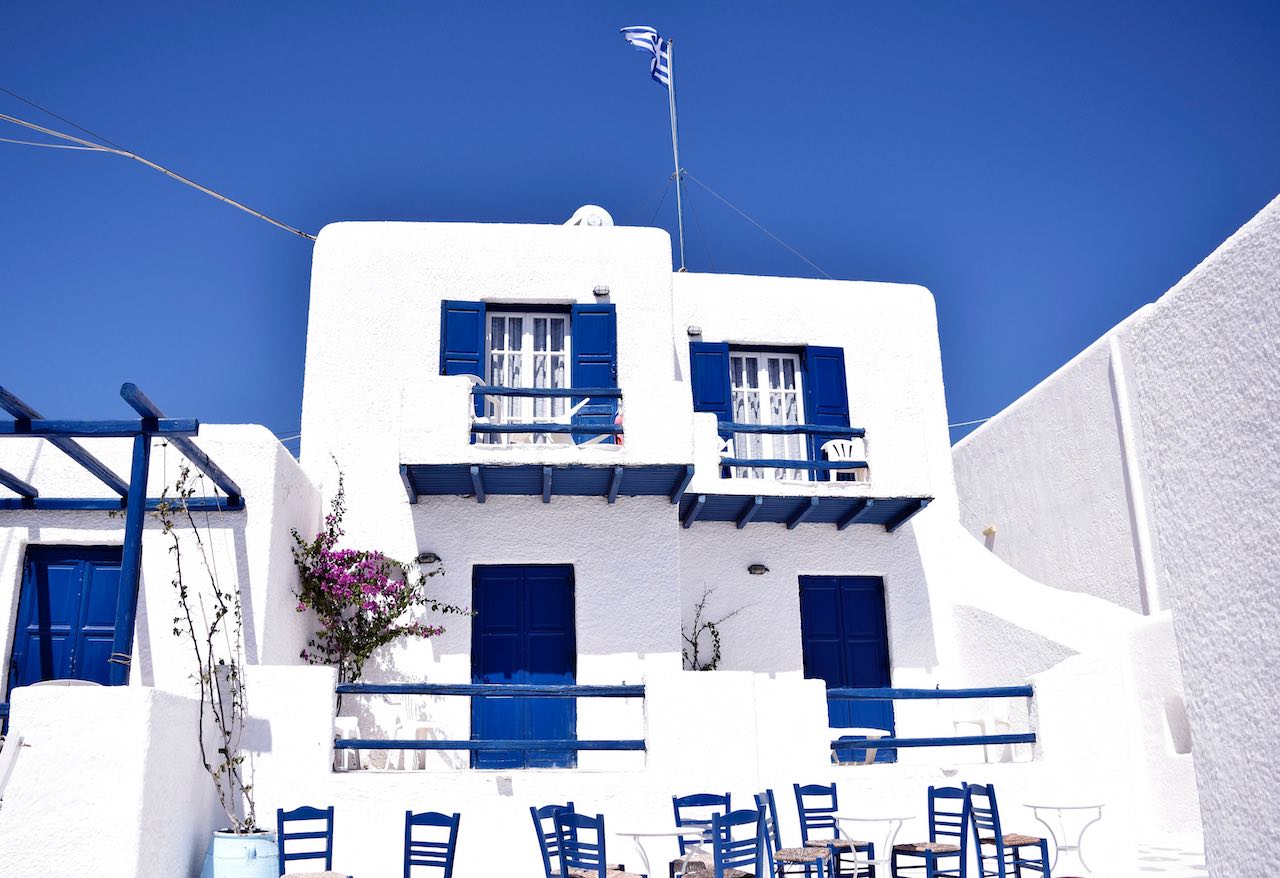 Mykonos certainly doesn’t want for gay-popular beaches. One of the most celebrated is Super Paradise Beach, a party-popular spot where music reverberates throughout the afternoon. Gay Elia Beach is a lively, nude-friendly beach that’s home to the annual XLSIOR festival. Next door you’ll find Agrari Beach, a picturesque rocky outcrop that’s also a hot-spot for naturalists. For one of Mykonos’ most extended sandy stretches, hop over to pine tree-lined Kalafatis Beach. Aside from its beaches, Mykonos is also known for the seven iconic ancient stone windmills that lie perched atop a hillside outside of Chora. Once you’ve grabbed your photo, while away the afternoon in nearby Little Venice, a charming seafront composed of 18th-century fishermen’s houses turned boutiques and cafes. Finally, don’t leave Mykonos without viewing the cherished Panagia Paraportiani church complex—a quintessential picture of the Greek Islands.

Going to Greece? The same team that brings you the content you love designs your perfect trip

Get your culture fix with a day trip to the ancient city of Delos (the mythological birthplace of Apollo and a UNESCO World Heritage Site) via a luxury yacht cruise. Explore uninhabited Delos and her stunning archaeological site, sail past secluded coves while sipping Greek wine, and take a cooling dip in the astonishingly clear turquoise water. If you prefer to keep your feet on land, explore Mykonos via bicycle to encounter hidden beaches and off-the-beaten-track paths around the Ano Mera Dam. 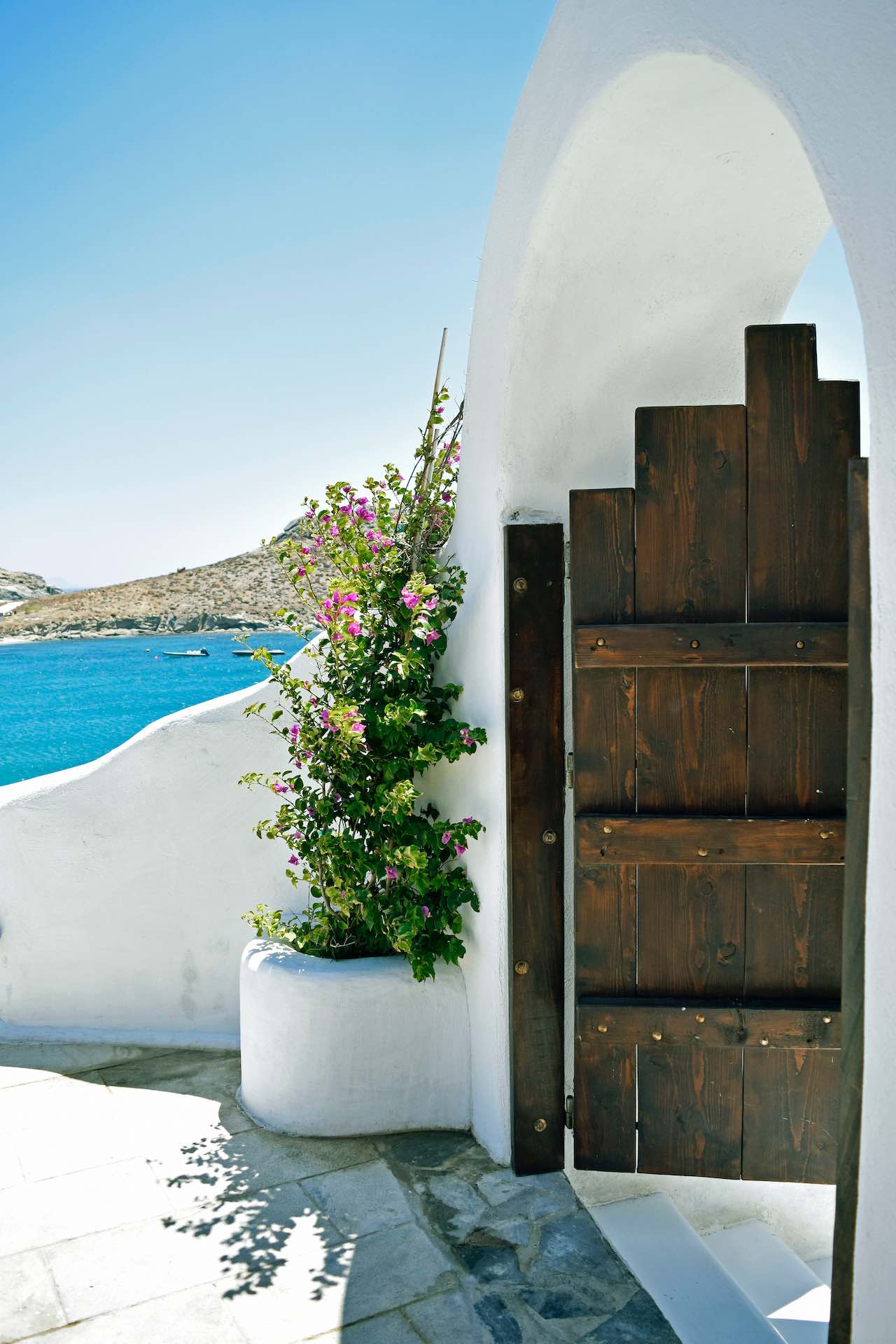 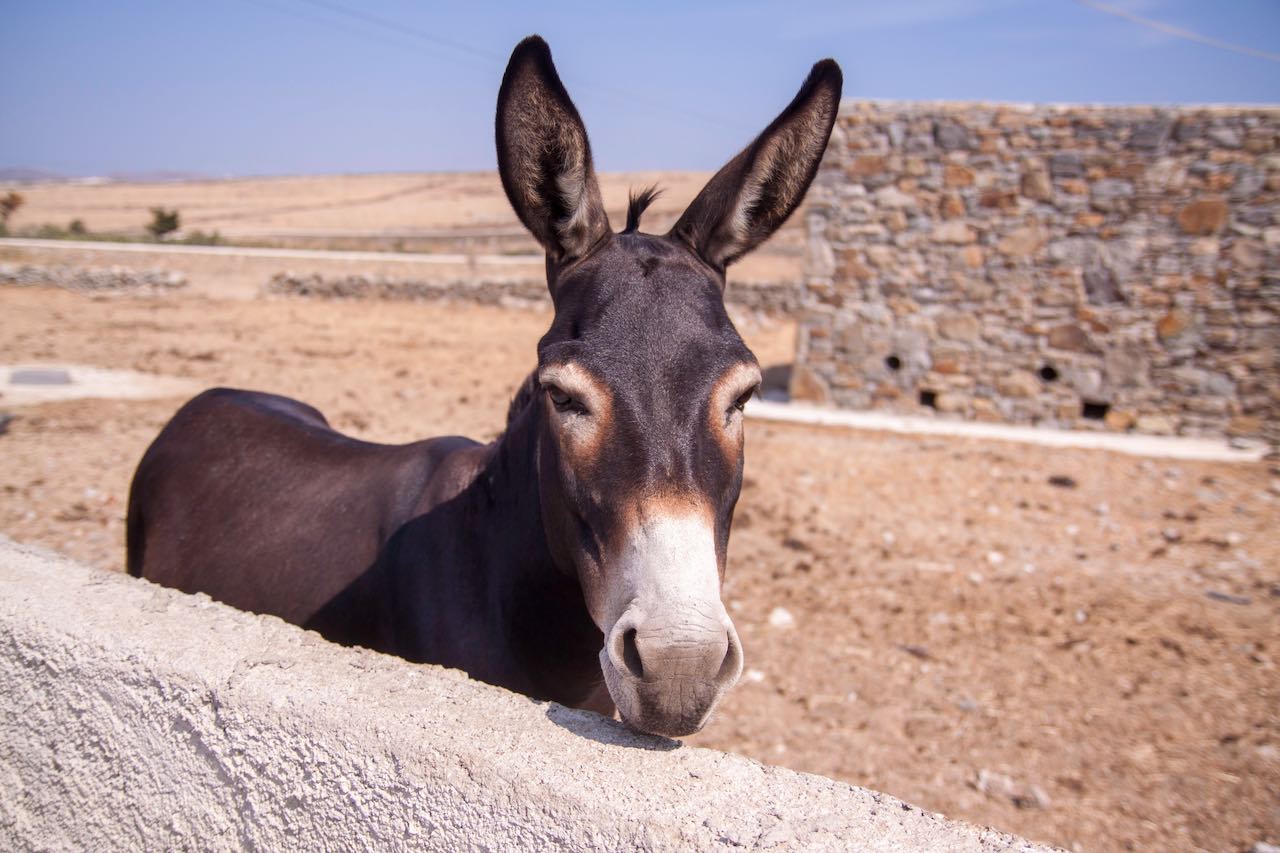 Where to stay: It doesn’t get more sumptuous than Mykonos Grand Hotel & Resort, where luxurious blue and white suites boast private balconies, personal infinity pools, and impressive views towards Delos. 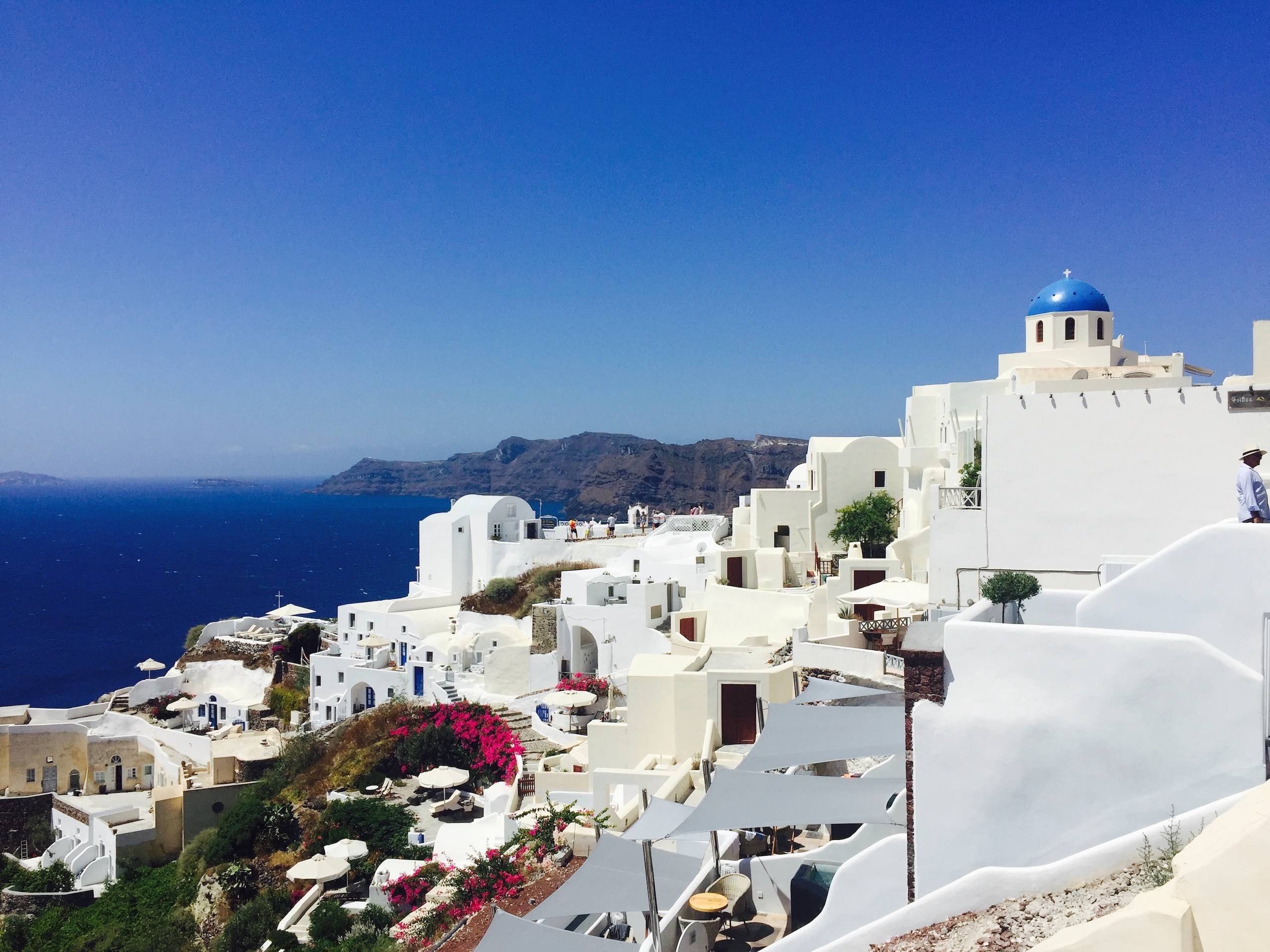 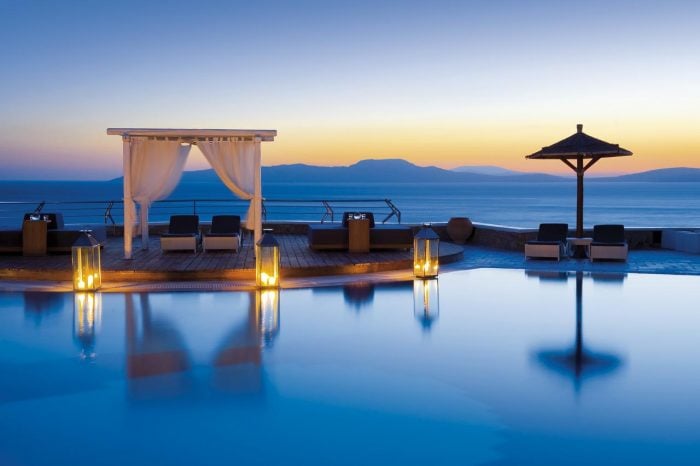 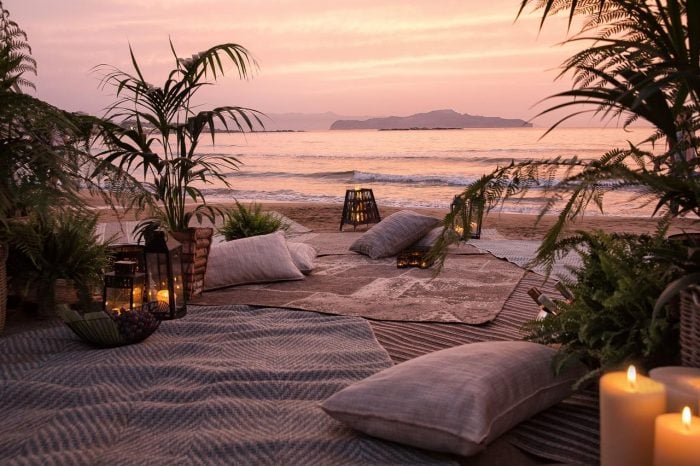 Offering private access to a sandy beach in Agioi Apostoloi, Domes Noruz Chania is the first Greek resort to be an honoree for its interior and exterior design. 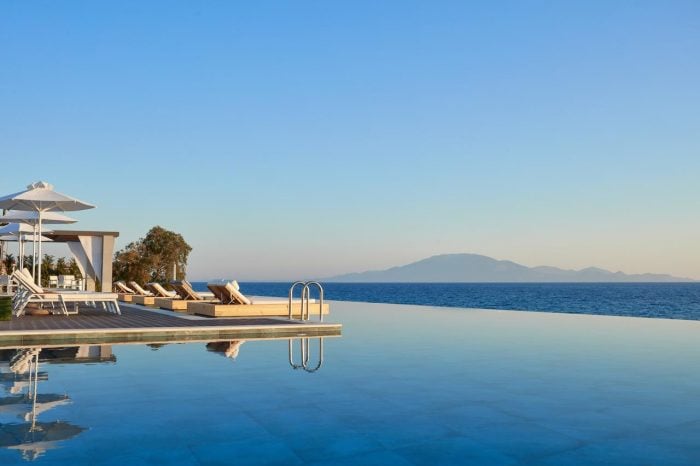 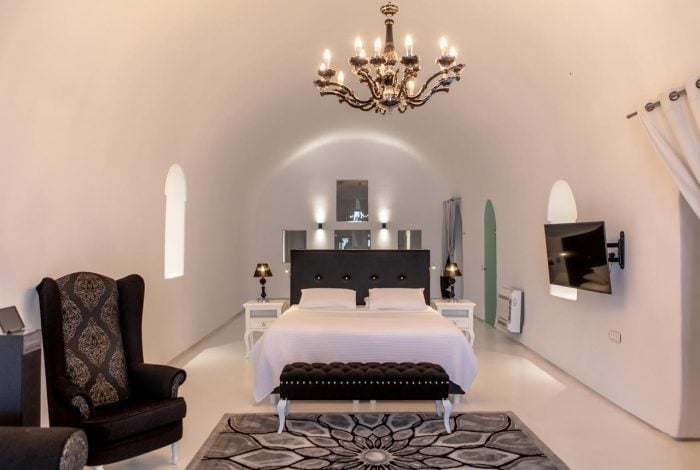 Featuring an outdoor heated pool and an indoor heated pool, Opera Mansion is a villa with a terrace located in Fira. A private outdoor bar is also featured. Free WiFi access is offered throughout. 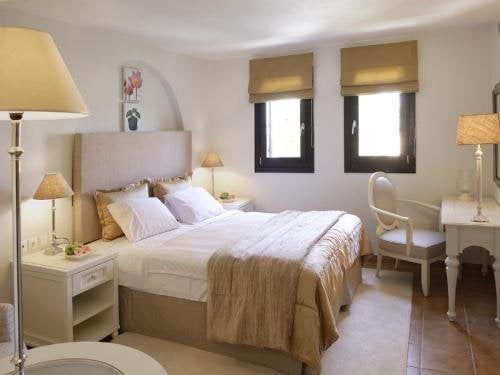 The suites are located in the 4 traditional Greek-styled buildings nestled amongst the olive trees. Each suite features a separate bedroom & living room, as well as a luxury bathroom & private verandah. 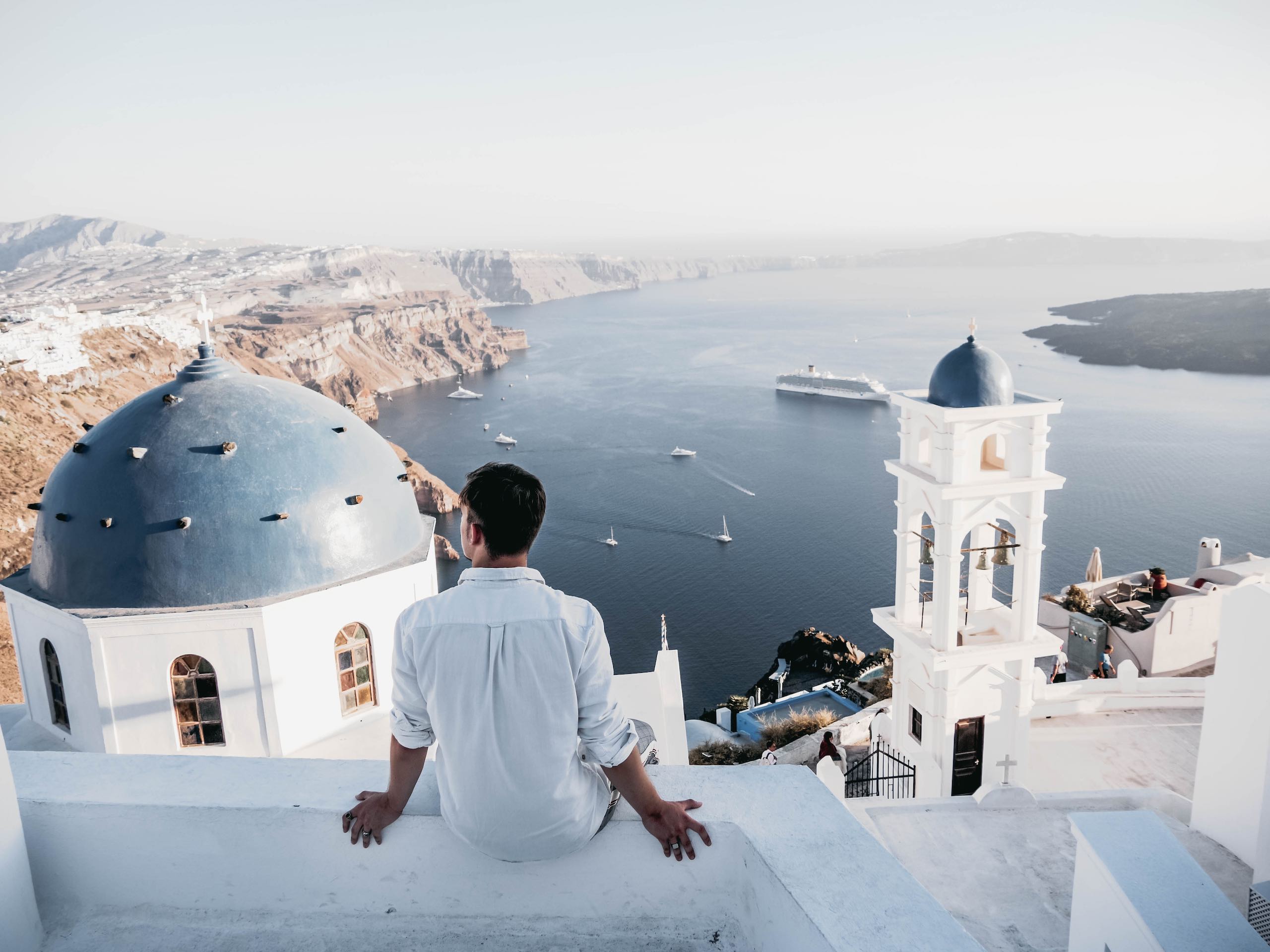 Discover more hotels like this in the Greek islands

Perhaps the most romantic of the Greek Islands, Santorini’s world-renowned sunsets, magnificent caldera, and whitewashed villages all make for one picture-perfect gay Greece vacation. While you won’t find much in the way of organized gay bars or beaches, Santorini is extremely gay-friendly; expect inclusive, diverse, and welcoming establishments all throughout the island.

As a result of a volcanic explosion some 3,500 years ago, Santorini offers a unique terrain punctuated with other-worldly red and black sand beaches. Don’t miss Kamari, Perissa, Agios, and the aptly named Red Beach. For Santorini’s most gay-popular beach, seek out Vlychada. You’ll know it for its striking white rocks and black sand pebbles. After a sun-dappled day working on your bronzed beach bod, check out Cine Kamari. Regarded as one of Europe’s best outdoor cinemas, the sweet spot features English movies and an outdoor bar in a leafy, tranquil setting.

One of the highlights of travelling to the Greek Islands is indulging in the groan-worthy local flavours. Skip the tourist menus and make a reservation with Gastronomy Santorini for a five-course meal overlooking the caldera at sunset. Ample wine pours and charismatic waitstaff round out the tasting experience. Speaking of wine, oenophiles will appreciate Santorini’s wonderful Assyrtiko and Vinsanto wines, characterized by the island’s fertile, volcanic soil. A wine tasting tour is the best way to appreciate Santorini’s unique varietals and first-rate wineries. 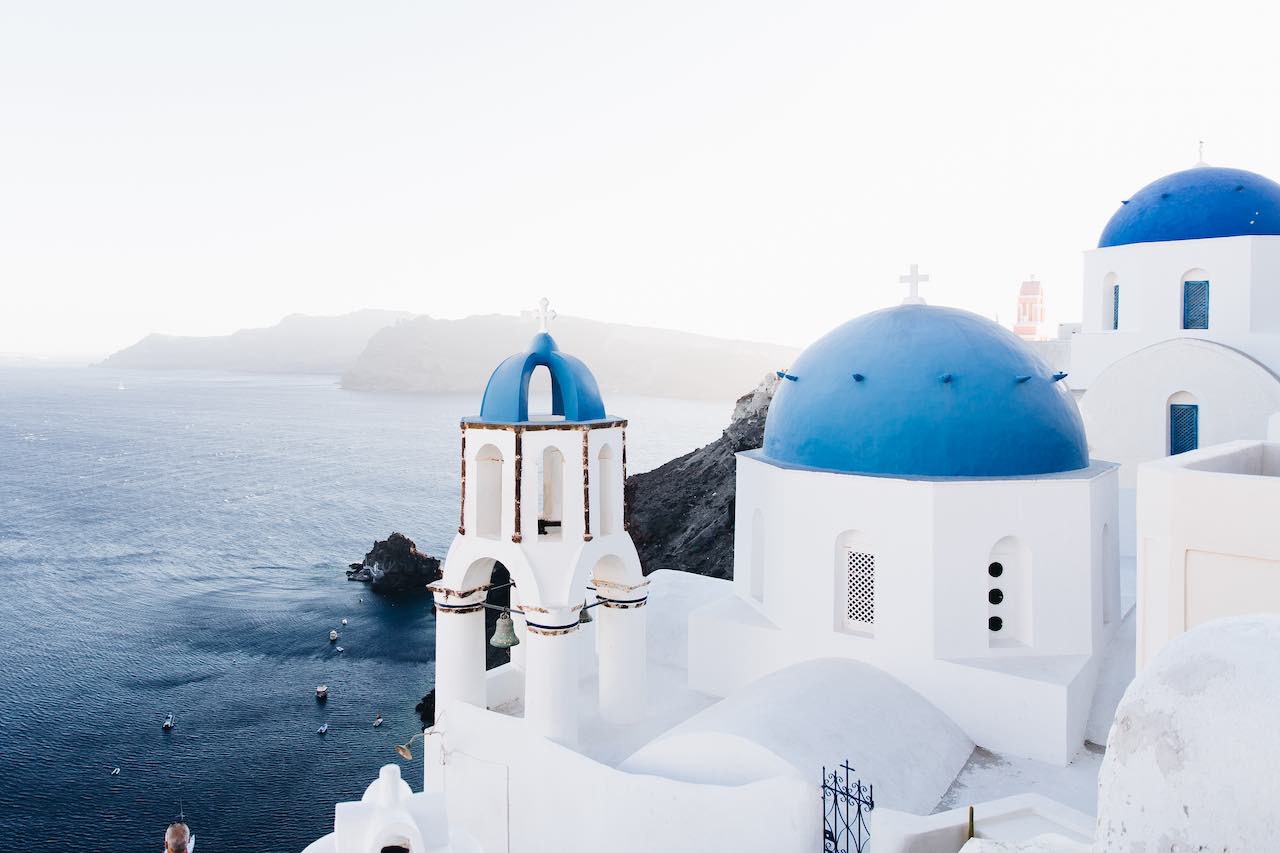 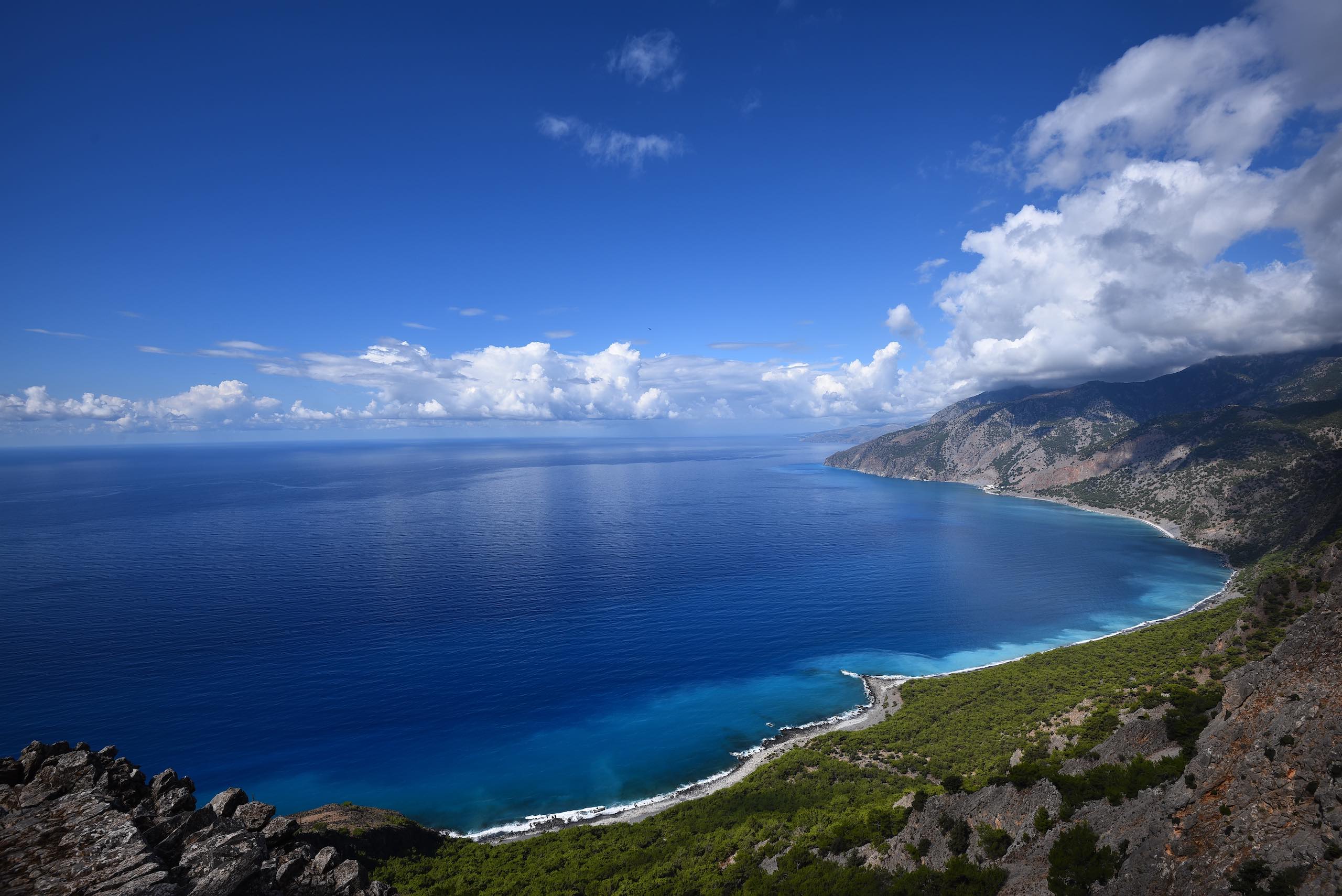 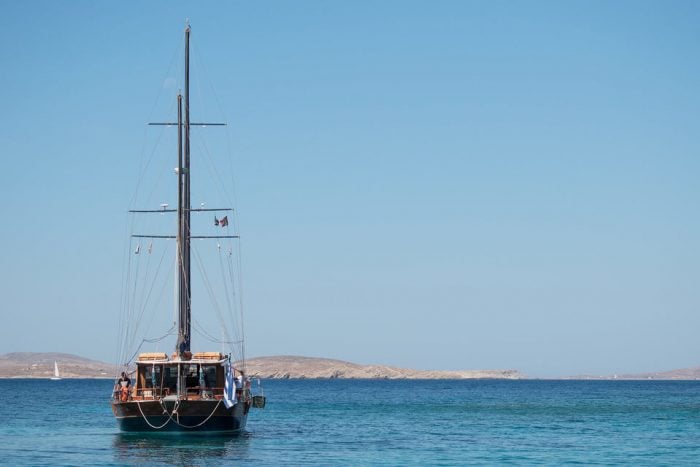 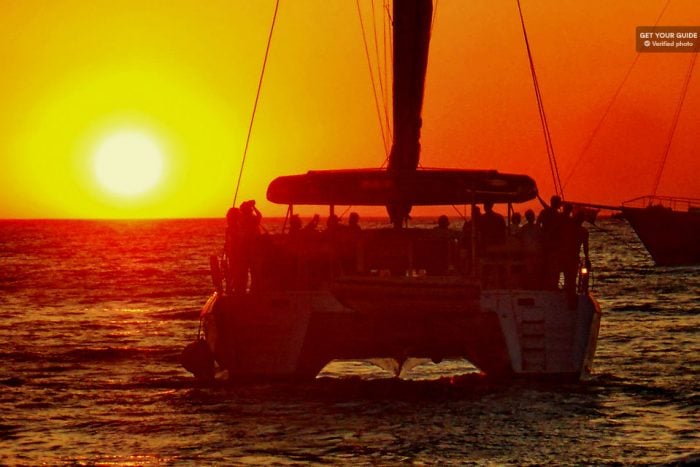 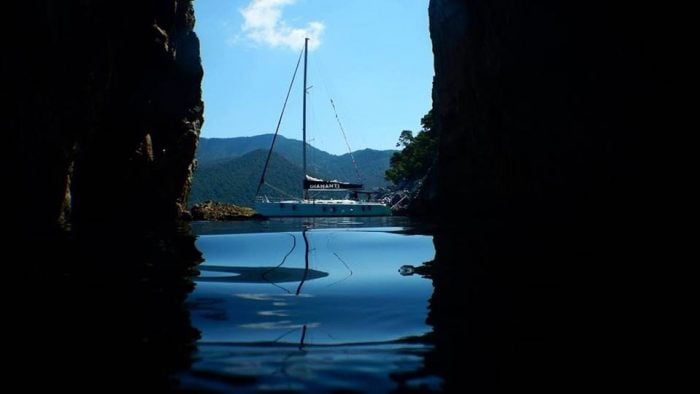 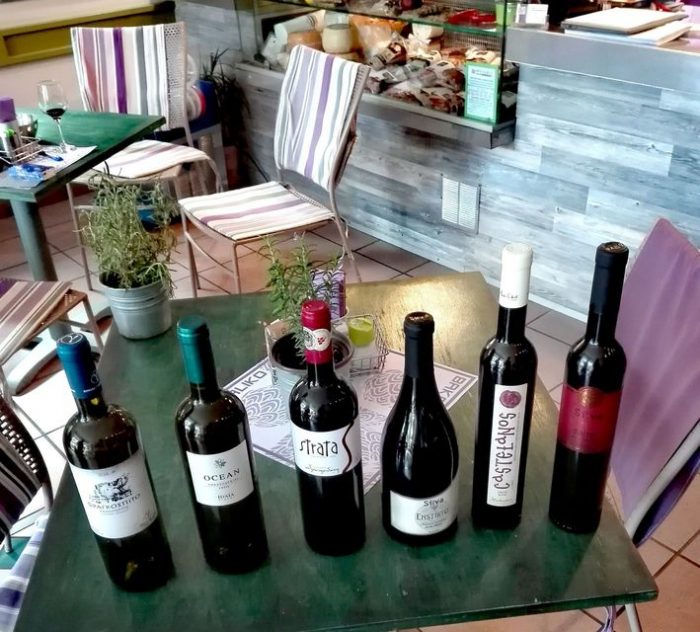 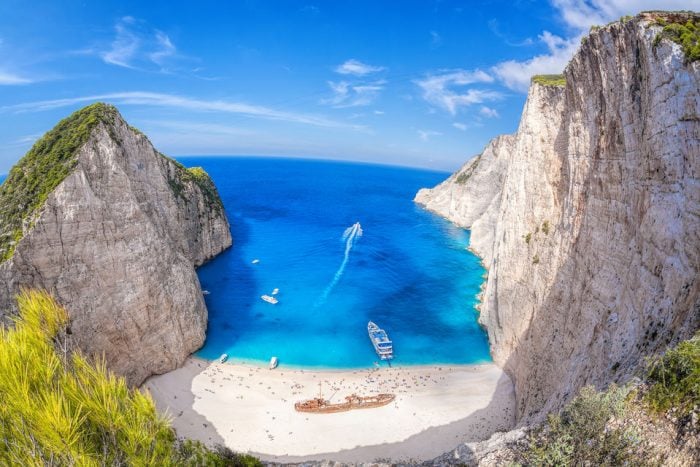 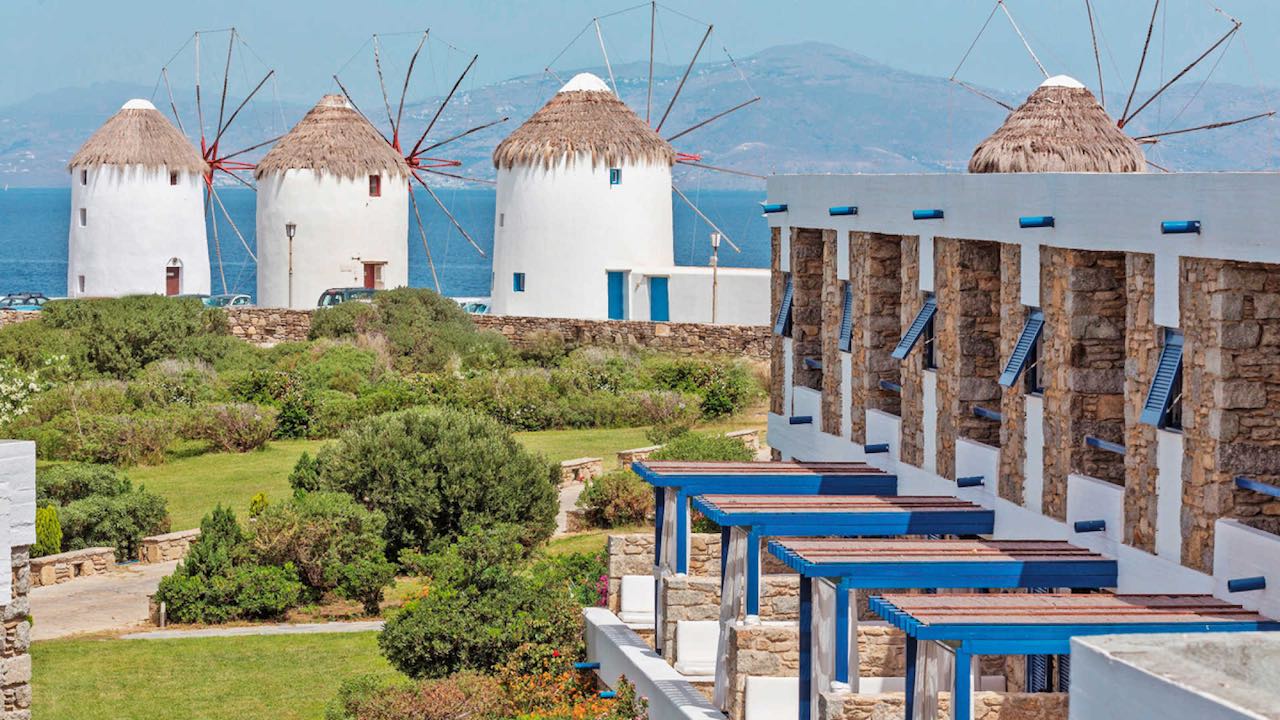 There’s a reason why Crete’s moniker is the “Great Island.” From Minoan ruins to rugged mountains to quixotic villages, Greece’s largest island knows how to pack a punch. Since Crete’s first Gay Pride event in 2015, gay acceptance is on the rise—in spite of traditional values that still run strong. Gay Crete might be more discreet than other Greek Islands, but locals are hospitable and establishments open-minded.

Listing all the highlights of Crete in only a few short paragraphs would be an exercise in futility. That said, here are our favorite must-dos on any gay Crete holiday. Start your exploration at hypnotic Spinalonga, a tiny island with a storied (and turbulent) history just a stone’s throw from Crete. Spinalonga was Europe’s last active leper colony, and today travelers can walk down the same roads where cast-out lepers once lived in isolation. Continue your history lesson at Knossos. This 18th-century BC palace has been called Europe’s oldest city and appears as the seat of legendary King Minos in ancient Greek mythology. Then there’s Crete’s wonderfully preserved Old Town, a maze of tight cobbled alleys, Venetian monuments and Renaissance architecture that stand testament to the island’s rule under the Republic of Venice.

Hikers won’t want to miss the 17-kilometer hike through Samaria Gorge, one of the most massive gorges in Europe. While admiring the stunning scenery, keep an eye out for kri-kri, or the endangered Cretan wild goat. Magical Elafonisi Beach is a small islet made famous for its stunning white and pink sand, as well as calm, shallow water. Natural swimming pools created by impressive rock formations add to the unique allure of the mile-long beach. Balos Lagoon is another paradisiacal Crete beach, with blindingly white sand and glimmering turquoise water. 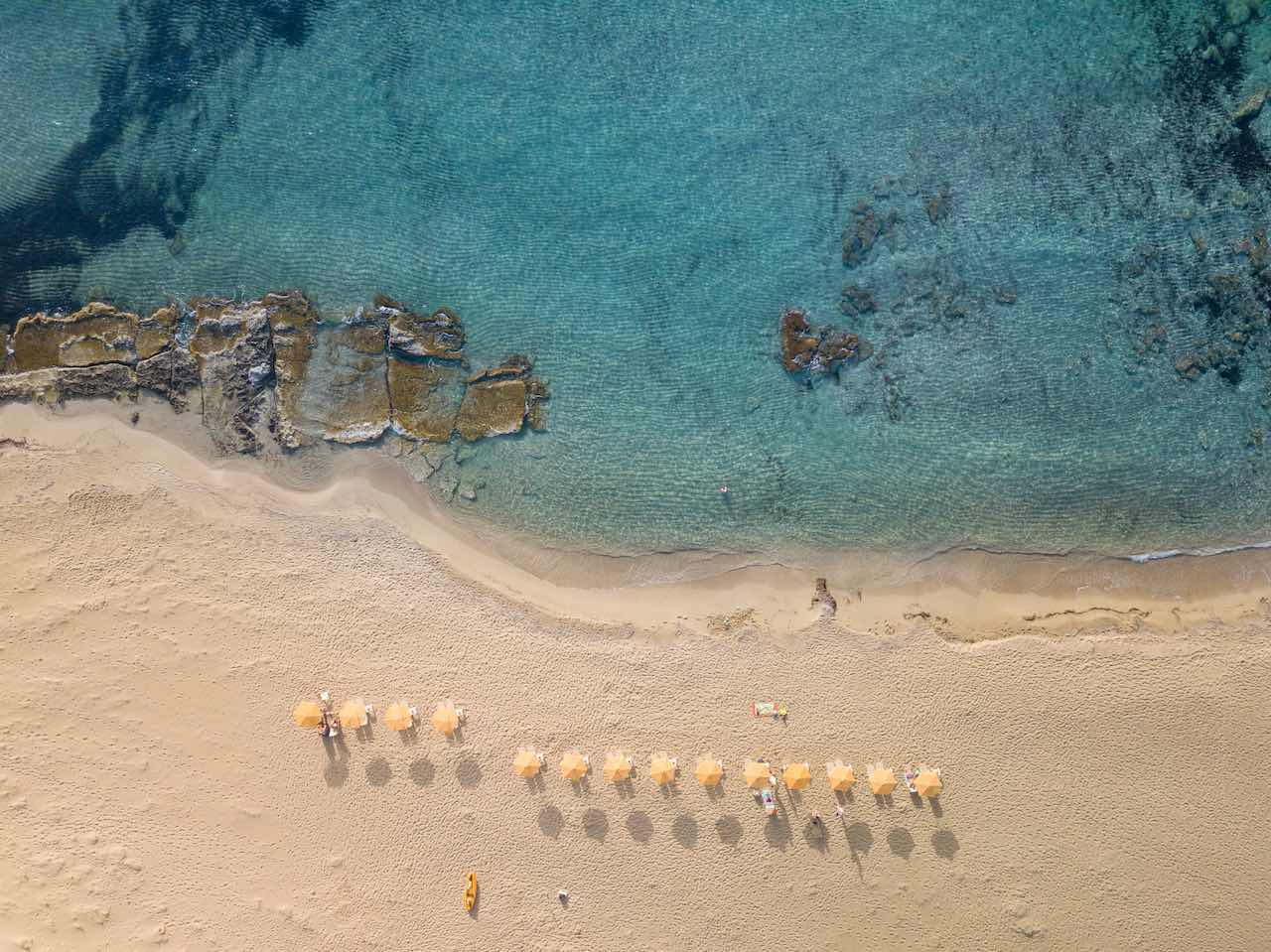 Where to stay: Domes Noruz is a hip design hotel inspired by the nearby domes of Chania’s Venetian shipyard. Lose track of time enjoying the spectacular sea views from the swim up bar, or fall into a beach bean bag chair while enjoying chilled out DJs.

Ah, Zakynthos. With its rugged coastline, intriguing coves and charming villages, it’s hardly any wonder this verdant island has become one of the most sought-after holiday spots in the Greek Islands. Similar to other small Greek Islands, you won’t find any exclusively gay bars or clubs, but gay Zakynthos is alive and well—and attracting an ever-increasing number of gay holiday-makers.

The crown jewel of Zakynthos is Shipwreck Beach, an idyllic cove that lives up to its reputation as one of the most beautiful beaches in the world

Now, let’s talk beaches because that’s likely why you’ve docked here. The crown jewel of Zakynthos is Shipwreck Beach (Navagio), an idyllic cove that lives up to its reputation as one of the most beautiful beaches in the world. The views are best enjoyed from above where the dramatic coastline can best be appreciated. To meet and mingle, head to Vrontonero, the island’s famed gay-popular nudist beach. While not the island’s most spectacular beach, it remains an excellent spot to soak in the sun au natural. If you’ve been indulging while on your Greek holiday, the healing sulfur waters at Xygia might be just what you need. Finally, don’t leave Zakynthos without venturing to the suitably named Blue Caves; objects (including swimmers) below the water almost magically appear to turn a bright shade of blue. 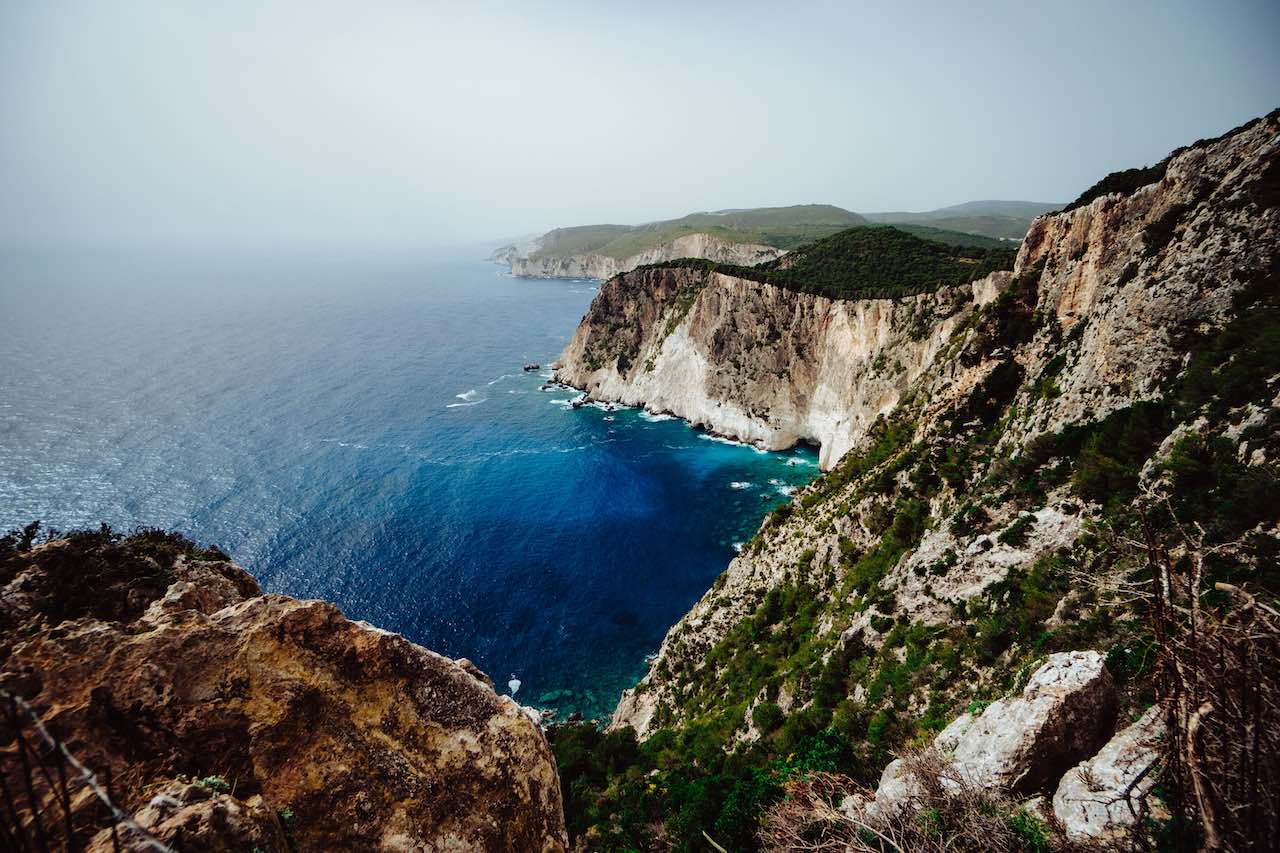 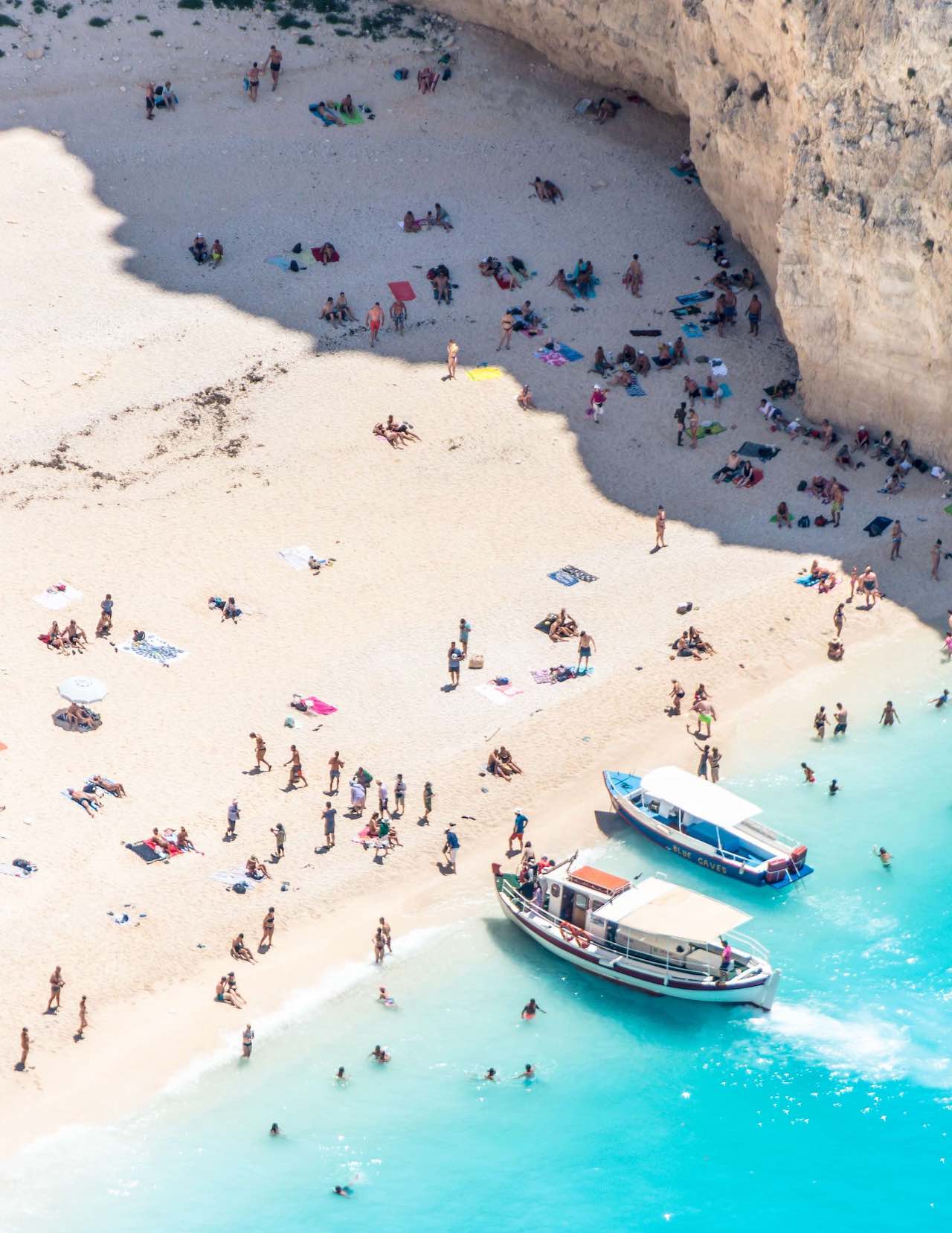 Where to Stay: Part of the charm of Zakynthos is that you can spend your day leisurely alternating between your hotel and the beach without experiencing any real traveller’s FOMO. That means your accommodation matters. Hotel Lesante Blu is a five-star, adults-only beach resort nestled on the island’s east coast. The decor is chic but minimalist (white is the design colour of choice) and amenities like a helipad and expansive infinity pool make it an obvious choice for the most discerning of travellers. 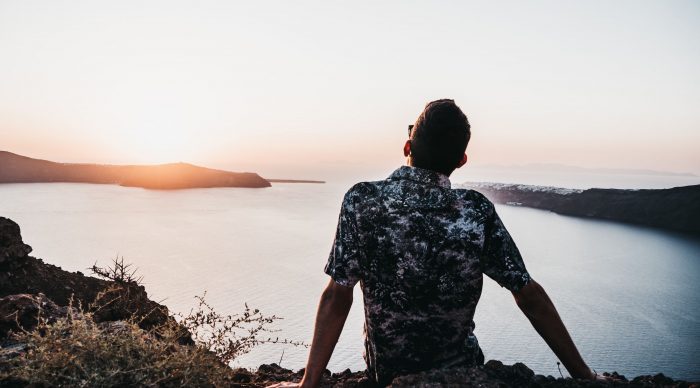 The best hotels in Santorini

Sunsets in Santorini are legendary. Vineyards, beaches and the ruins of Akrotiri are within walking distance of some of the island’s most luxurious stays.

The best Crete beaches and where to stay

To best experience the colours, sights, smells and textures of Crete, it’s to the beach we head, from Chania in the west to the Lybian coast in the south. 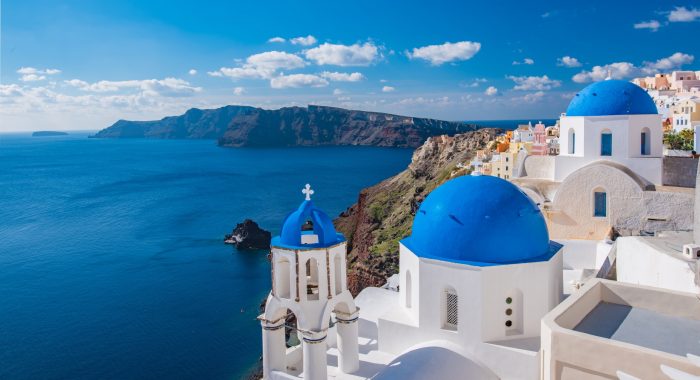 Greece itinerary 10 days - how to plan your dream Greece vacation