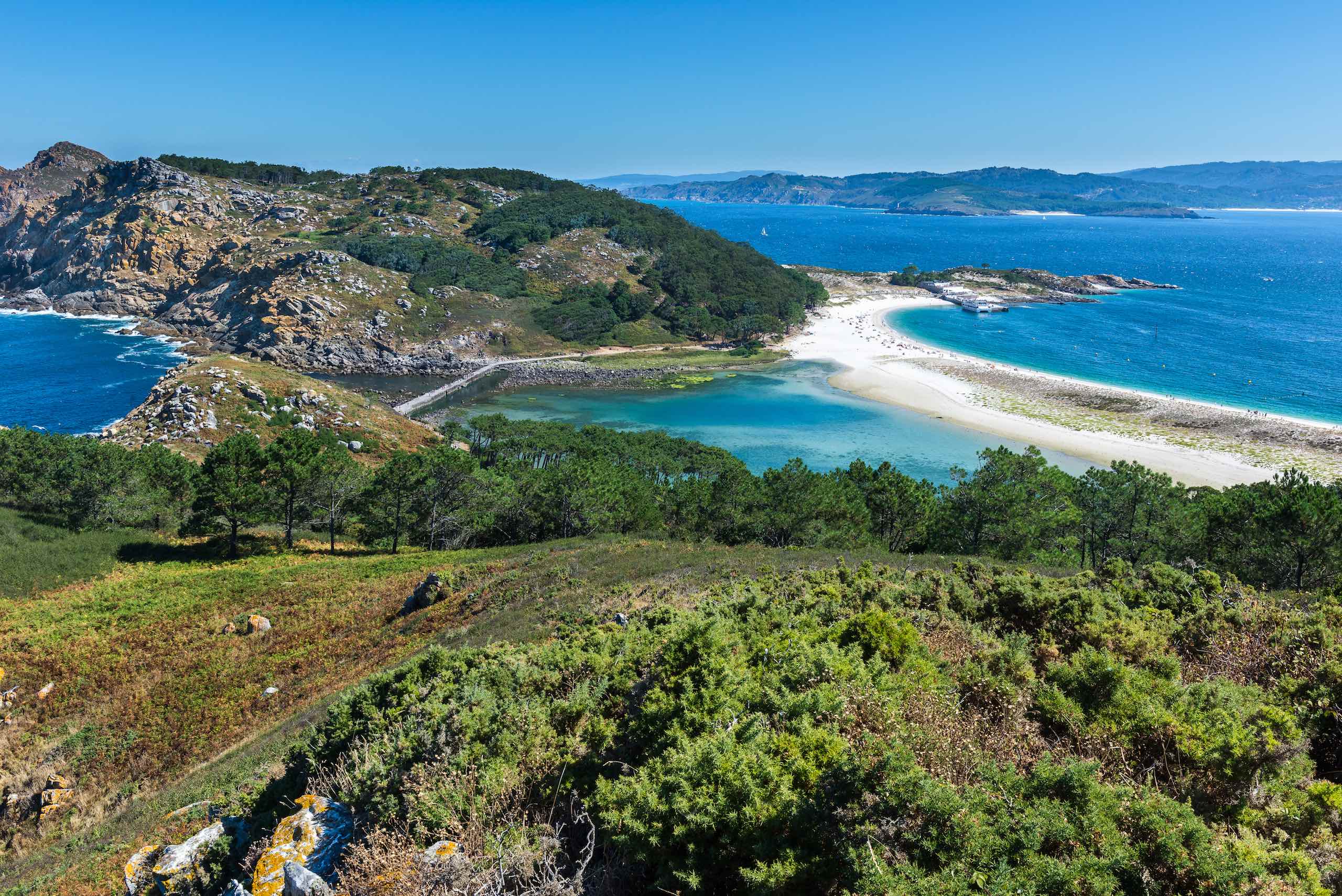 Things to do in Vigo

Stories > Experiences > Things to do in Vigo
Bastiaan Ellen

When considering a holiday in Spain, international travellers often overlook the beautiful and rugged northern Atlantic coast of the Iberian peninsula for more popular Mediterranean coast destinations like the Costa del Sol, or the beaches near Barcelona or Alicante. One such overlooked northern destination, Galicia, offers spectacular yet unpretentious beaches, epic scenery, gorgeous white wines, and delicious seafood. This mountainous and verdant northwest corner of Spain, in some places more closely associated with the lush green of Ireland than with Spain, is a diverse region with its own language and culture. Galicia may be best known for its beautiful medieval capital Santiago de Compostela, the destination of the namesake pilgrim trails, but the province has much more to offer. We explored the southern region of Spain’s west coast, in the area just north of Portugal, with Vigo serving as our base.

Like Bilbao, Vigo isn’t known for its inherent beauty, and a keen eye is required to spot from certain vantage points the beauty of Vigo’s natural landscape of rolling hills leading to the sea. This is due to its brutalist and grey architecture built during the city’s rapid expansion in the mid-20th century. But it is undeniably a beautiful setting for this vibrant port city.

Vigo is also the bustling home to half a million people, which comes to life after dark in its buzzing tapas bars and world-class, yet humble restaurants. A place where the air is salty and moist, where steep city inclines can challenge your fitness level, and where seagulls the size of small dogs rule the airspace and sometimes the streets. While Vigo isn’t a destination for architecture lovers, for those who appreciate excellent and affordable seafood, wild nearby beaches and age-old vineyards, and friendly locals it is definitely worth a visit. 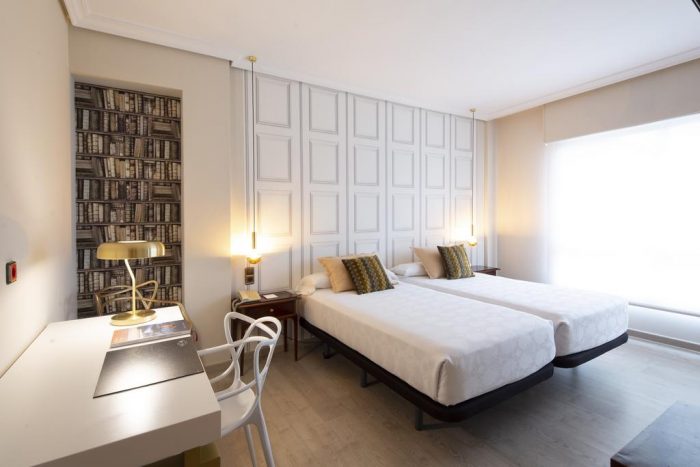 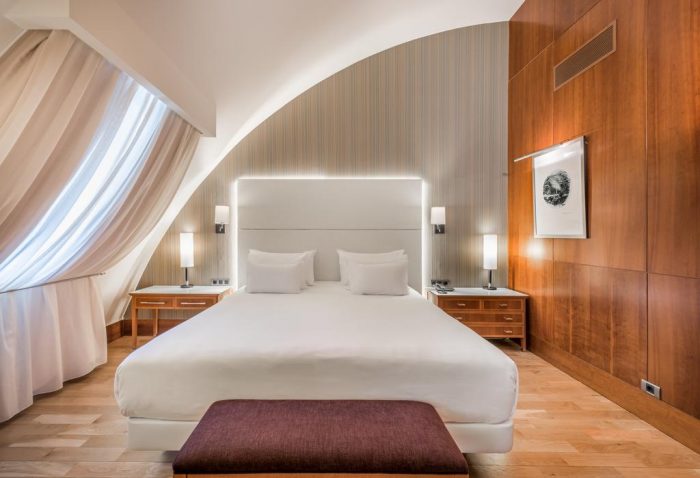 The NH Collection Vigo is situated in Vigo’s commercial and financial district, near the Nautical Club and the Do Castro park. It has a fitness centre. 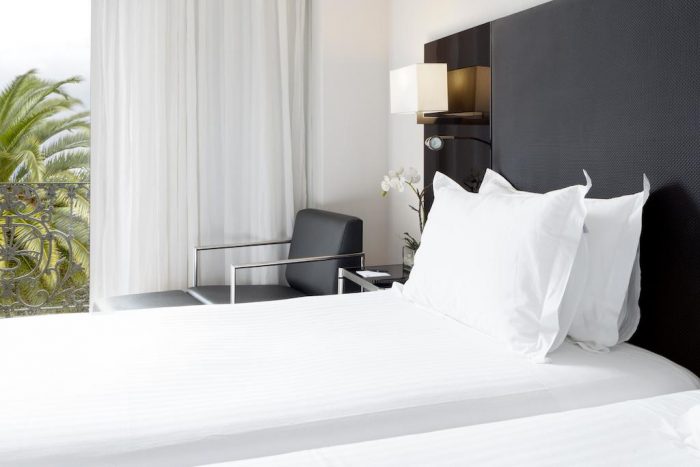 AC Hotel Palacio Universal is in a classical-style building dating from the 19th century. This smart and luxurious hotel is next to the port, and 5 minutes on foot from Vigo city centre.

Finding a bad meal in this part of Spain takes some effort, confirming the advice from all our friends in Madrid that “se come muy bien” (you’ll eat very well) in Galicia

Where to eat in Vigo

TripAdvisor and Google are loaded with glowing reviews of Vigo’s restaurants, and food is indeed one of the region’s main draws. Finding a bad meal in this part of Spain takes some effort, confirming the advice from all our friends in Madrid that “se come muy bien” (you’ll eat very well) in Galicia.

Mijo Mini Bar is where Asia meets Galicia. Not just in the blond wood panelled interior, but also on the menu. Its creator, Jonathan Mota, spent time in Venezuela, the US, Italy and the UK,  and delivers a modern yet modest experience that fuses local, fresh produce with Japanese, Korean and Thai flavours. The slightly smoky salmón mi cuit is a must-try, as is the silky smooth pork cheeks with potato and truffle mash. Accompany the meal with a bottle of buttery, white Finca Viñao from the region.

You can continue the fusion theme, this time with a combination of Peruvian and local Galician cuisine at Vinoteca Época, where the knowledgeable staff will compliment you on your excellent choices, encouraging the budding gastronomist. Delicious dishes include sea bass ceviche and black rice with mussels served with pico de gallo. The fresh tomato and acidic lime juice in this Mexican salsa add freshness to a traditionally heavy dish. Come with cash in your pocket as the restaurant doesn’t accept credit cards. 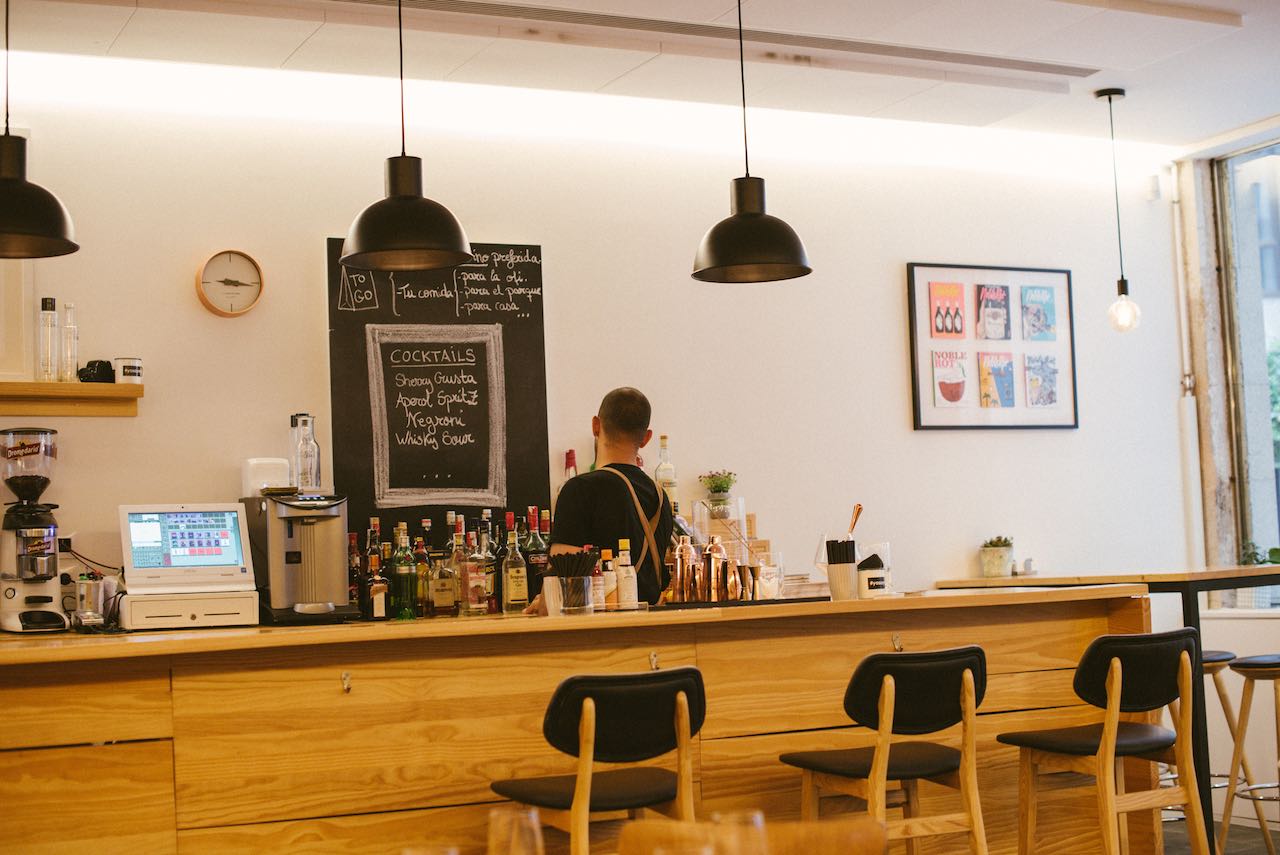 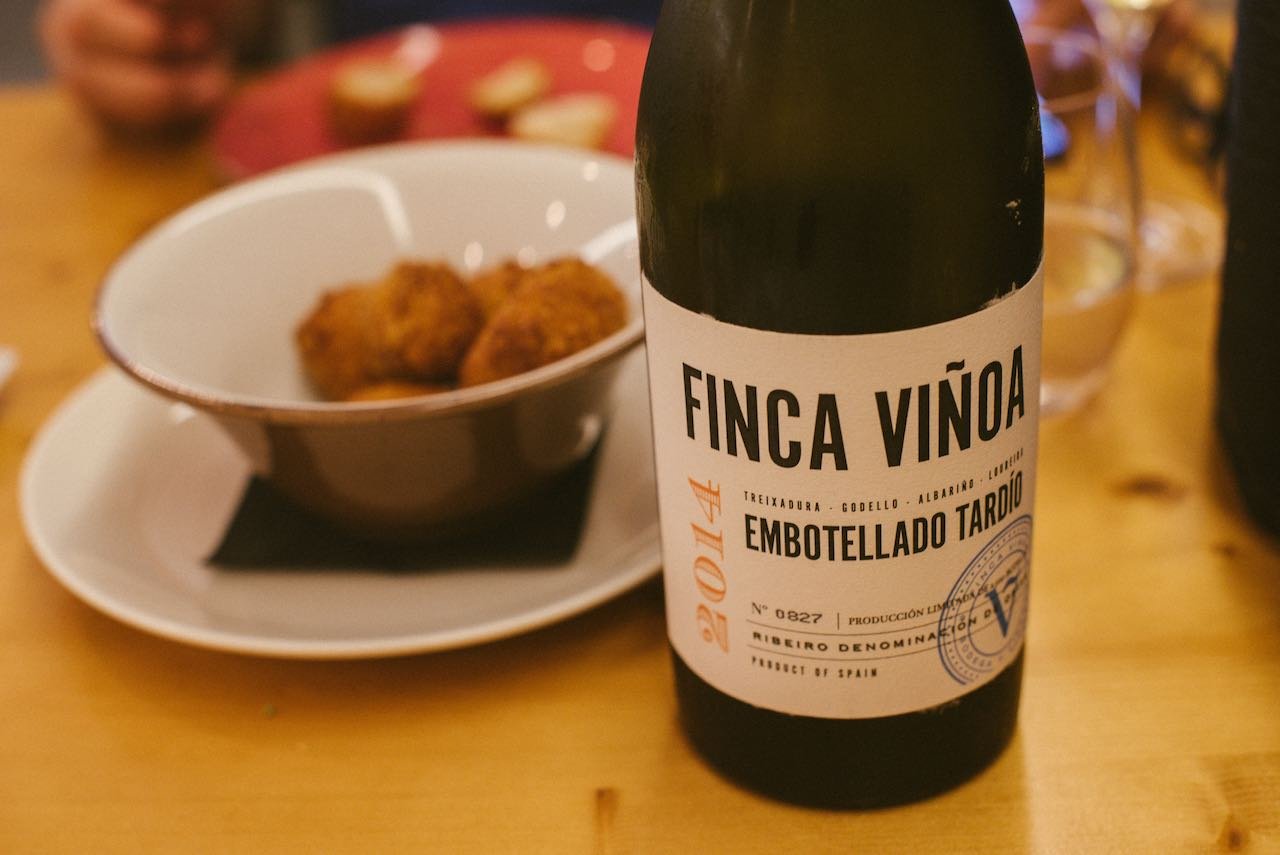 For a conventional, hearty Galician fare head to Follas Novas. Harshly lit with Golden Girls décor, this eatery dishes out glorious traditional Galician food in generous portions. Start with a perfectly cooked, slightly runny Spanish omelette – the way it is meant to be prepared and one of the best we’ve had – and follow with fresh fish such as sole or cod, served with vegetables and potatoes. Follas Novas is where you’ll want to order the local delicacy pulpo (octopus). Be sure to reserve as this eatery is popular with locals and visitors alike.

Michelin-starred Maruja Limón is the place for your special night out in Vigo. You’ll notice immediately upon entering that the restaurant’s 1970’s-80’s rock music is an unusual backdrop for a fine dining experience, but Chef Rafa Centeno’s food hits all the right notes. Take your pick from three tasting menus, from 7 dishes for €48 to a whopping 15 dishes for €78. A visually pleasing minimalist decor of wood and natural stone complements the excellent value for money gastronomic experience, although again you will be left puzzled by the music selection. 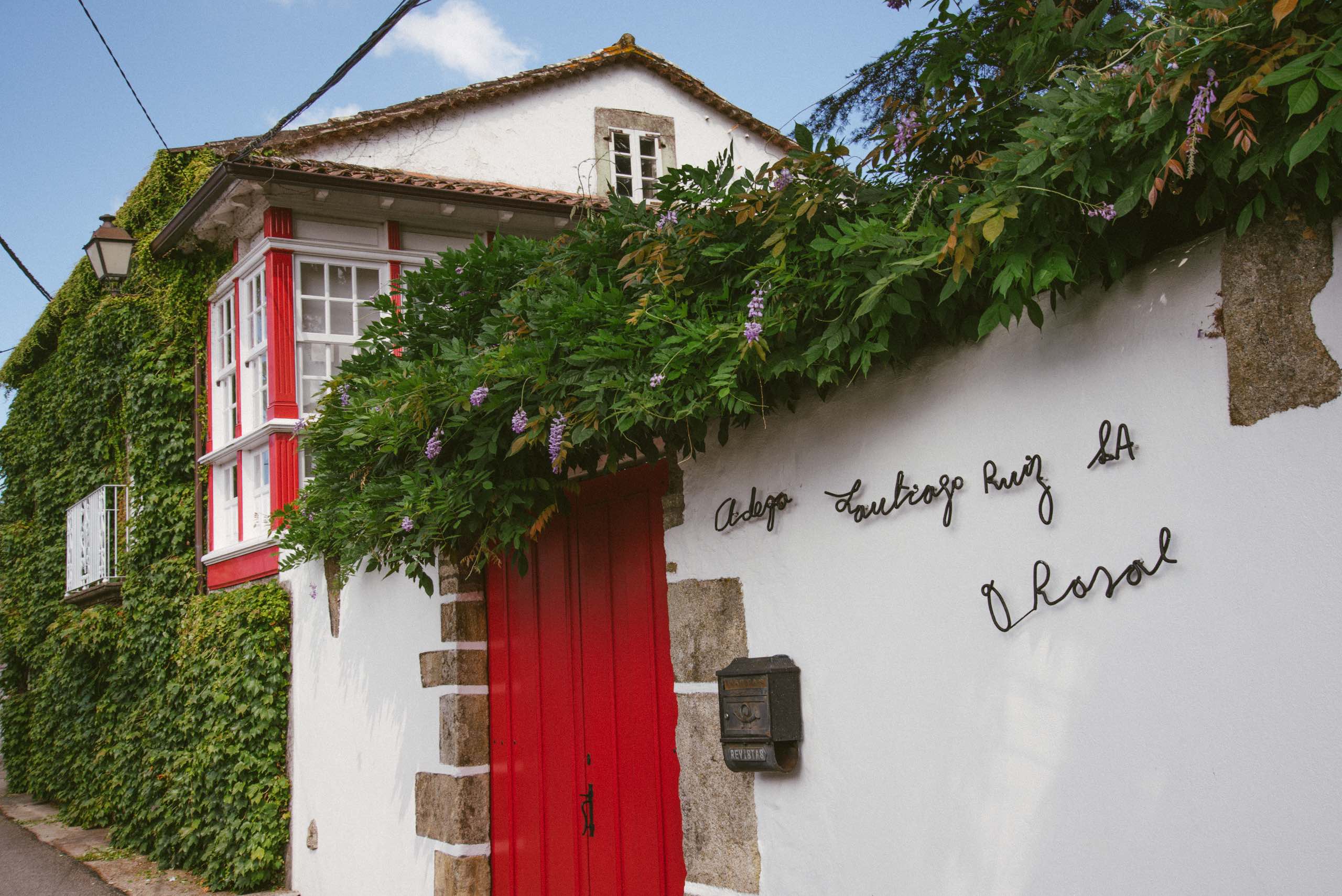 Going to Spain? The same team that brings you the content you love designs your perfect trip

As the boat pulls into the Cíes Islands, you’d be forgiven for thinking that you’ve arrived in the Adriatic rather than the Atlantic. These beautiful isles are home to some of Galicia’s best beaches. Spend a lazy afternoon sunbathing on Praia Das Rodas, a crescent of soft white sand and clear blue water. Be sure to bring plenty of sunscreen and food and drink with you as there is only one restaurant on the island. More importantly, you must secure a permit and ferry tickets well in advance, particularly for visits in July and August. Only 3,000 visitors are allowed at any one time, and this limit is quickly reached during peak holiday season.

If you’ve missed the boat on the Cíes Islands (pun intended), you can visit Ons Island instead, which is further away and less touristy. Ons’ beaches are more rocky and rugged than Cíes, and you’ll contend with families pushing prams and hooligan seagulls eyeing your food. There are three very busy restaurants on the island, as well as hiking trails, and a campsite. 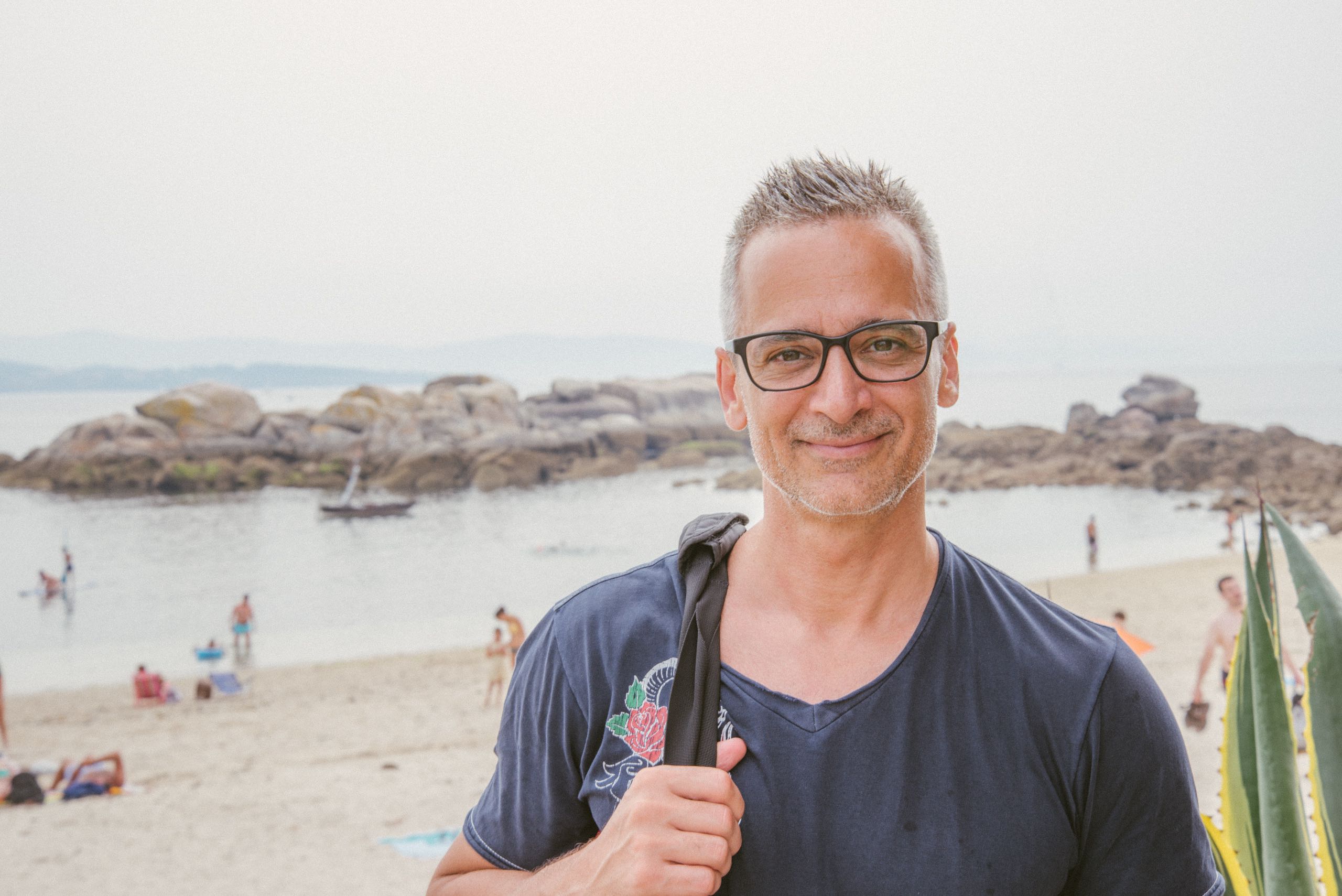 If it’s an Ibiza-like beach club experience you’re after, purchase a sun bed and spend the day at Marina Cies Beach Club

You won’t have to venture far for a private stretch of sand in this part of Spain; more than 100 beaches in Galicia have blue flag, or high environmental quality status given by the EU. There are several beaches within the city boundaries, Samil Beach being the closest and best. In our opinion one of the most expansive, best public city beaches we’ve seen in Europe. If it’s an Ibiza-like beach club experience you’re after, purchase a sun bed and spend the day at Marina Cies Beach Club where you’ll enjoy great views and service upstairs as well as delicious grilled meat or fish for lunch, followed by a swanky sundowner over trendy tunes from the Beach Club’s excellent resident DJ.

For a more private, laid-back vibe take a 45-minute drive north to San Vicente do Grove, which is quiet even in August. Local chiringuito (beach bar) Náutico hosts live music during the summer. Another option is Playa de Barra, which is part nudist, with a pine forest backdrop setting off the crystal clear water and powdery golden sand. Both worth the drive. 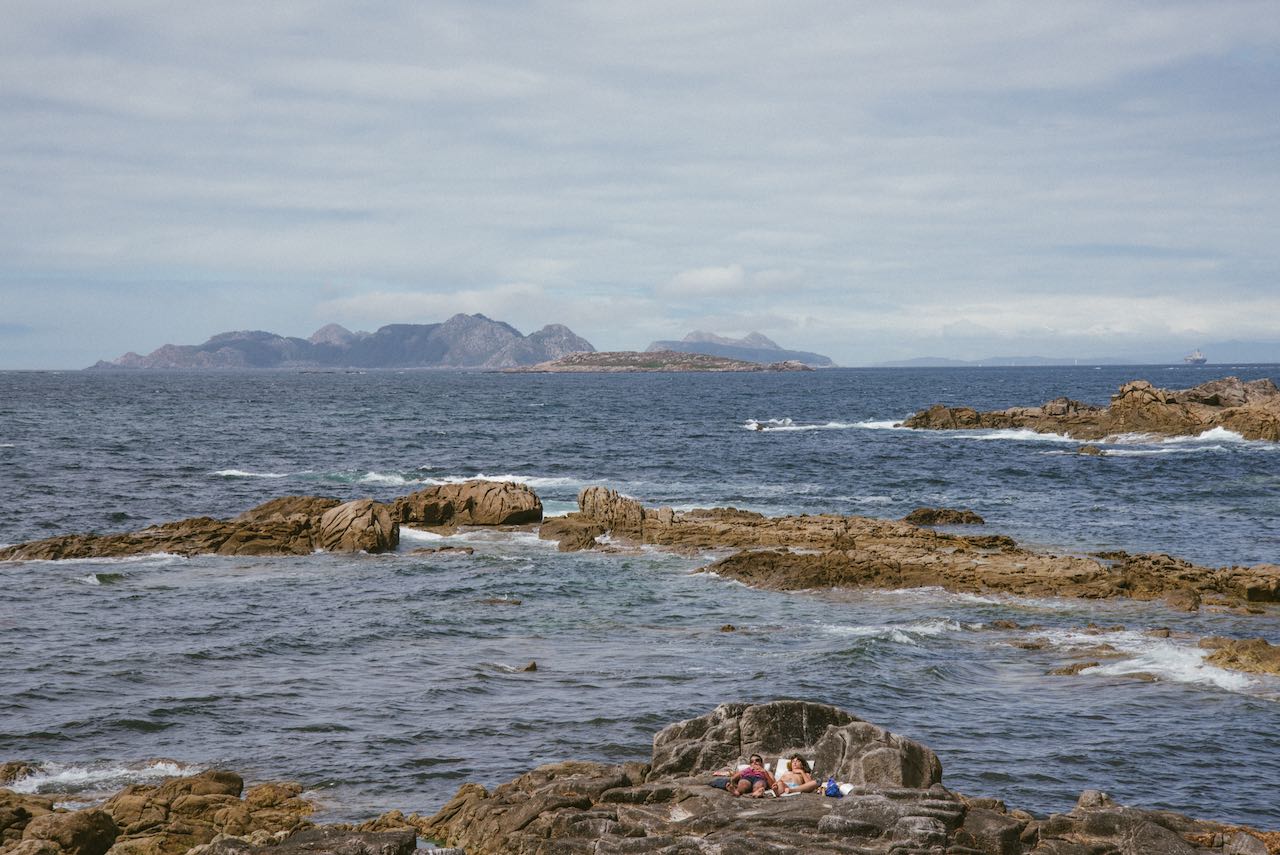 Rías Baixas was not formally established as a Denomination of Origin until the late 1980s, even though winemaking in Galicia dates back two millennia. But soaring popularity of the fresh, local aromatic wines means that today hundreds of barrels of white vintages are produced from wineries throughout the various subzones in Rías Baixas. One of them, O Rosal, near the Miño River which forms the natural border with Portugal is the southernmost sub-zone and is known not only for the region’s speciality Albariño but also for Loureira and other varietals.

At  Bodega Santiago Ruiz, Rosa Ruiz welcomes you into her family home, a 17th-century manor surrounded by ancient vines. Their lovely namesake wine contains a blend of Albariño, Loureiro, Treixadura, Godello and Caiño Blanco, and its charming label carries a quaint hand-drawn map of the region made for guests of Rosa’s sister Isabel’s wedding in the 1960s. At neighbouring Terras Gauda, one of Galicia’s largest winemakers, take a guided bus and walking tour through their expansive vineyards. It is here that the unusual and late ripening Caiño Blanco yields the surprisingly peppery La Mar, an exciting alternative to Albariño.

We highly recommend a stop for lunch in A Guarda, a small and colourful fishing port, with a cute harbour and excellent seafood restaurants. Its prize attraction, however, is the Monte de Santa Trega hill, rising just outside of town. A drive up to its panoramic summit offers sweeping views over the Miño river and neighbouring Portugal. 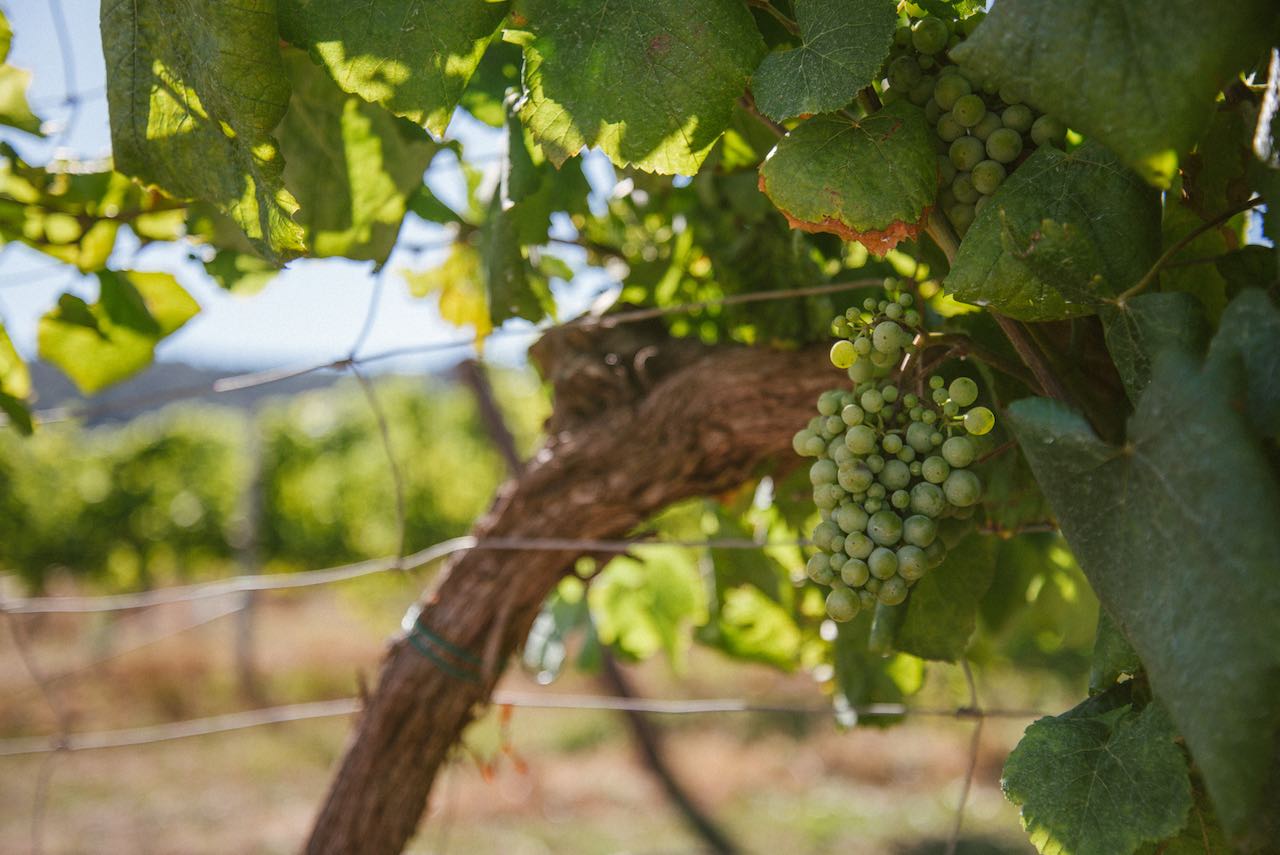 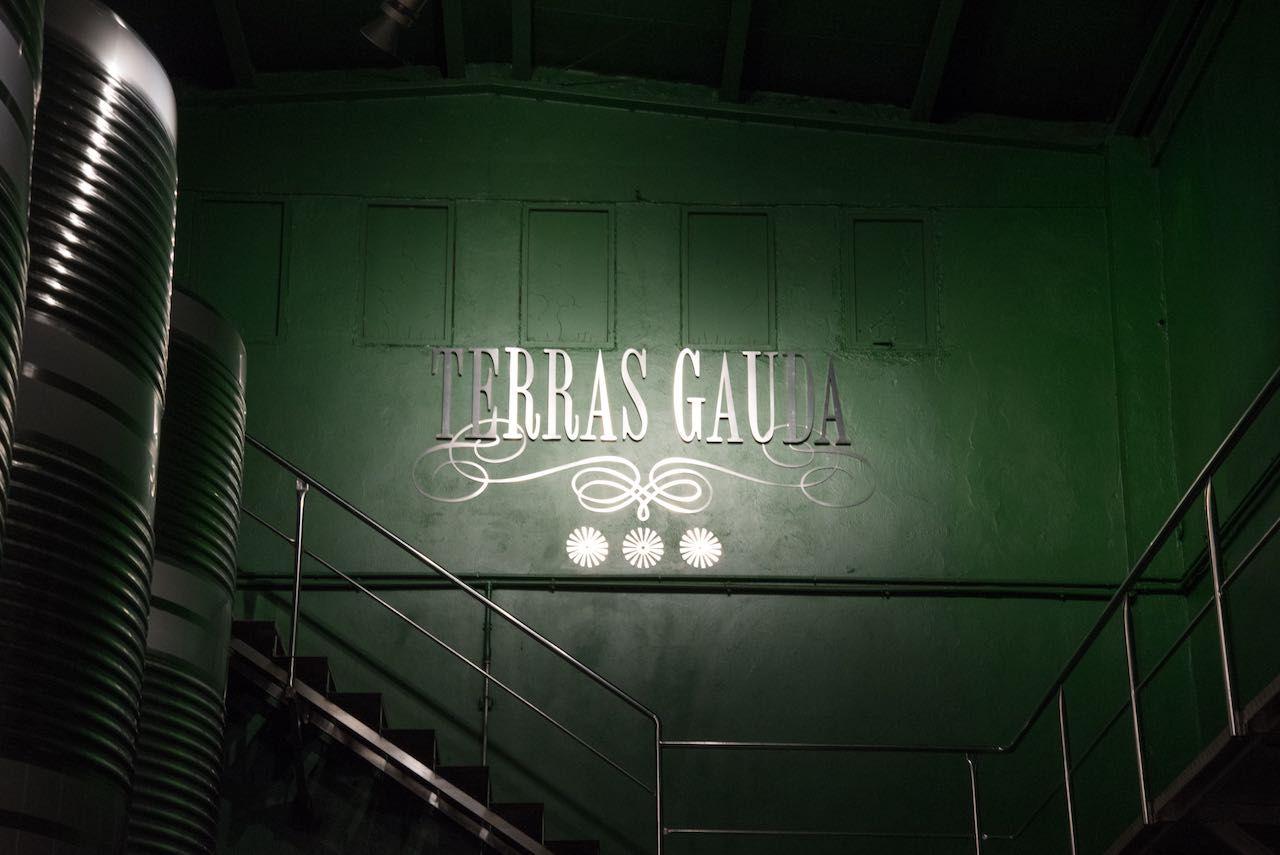 Pick up some local gin

While you may have known that Galicia produces wonderful wines, you may not be aware that the region also produces its own spectacular gin: Nordés. Its alcohol base is distilled from the Albariño grape, giving this gin its characteristic white fruit aromas. Add a mixture of 11 botanicals, six of which are sourced locally, including sage, verbena, peppermint, and a type of seaweed called glasswort, and the result is a sunny, fruity gin, sold in a white and blue bottle that draws its inspiration from Sargelos, the famous regional ceramics brand. 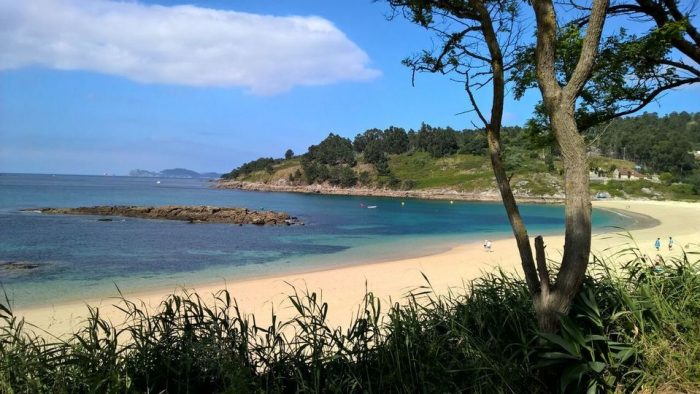 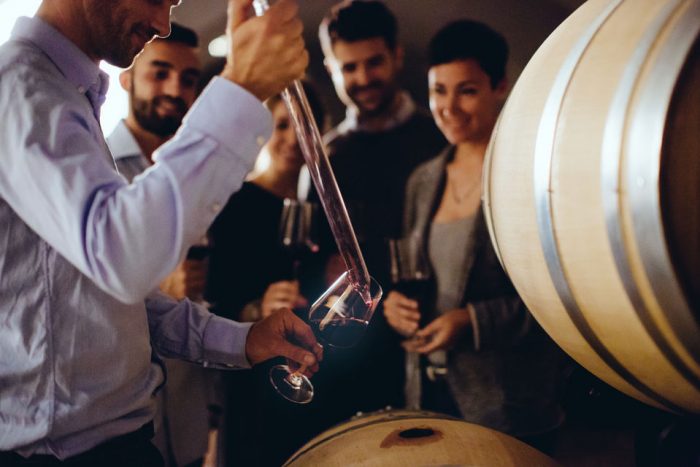 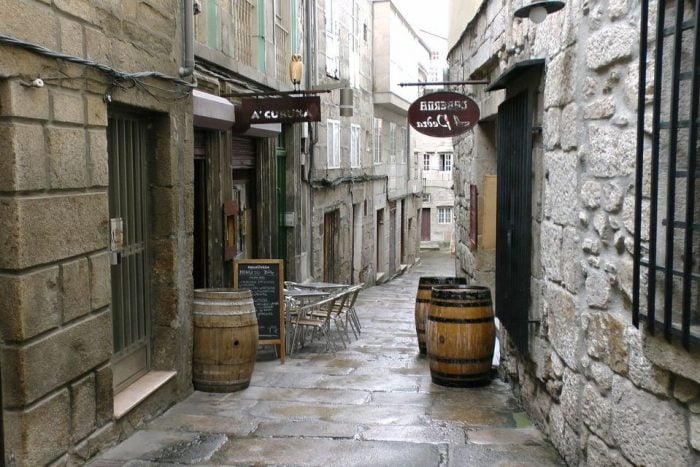 Tapas of Galicia Food Tour with a Local 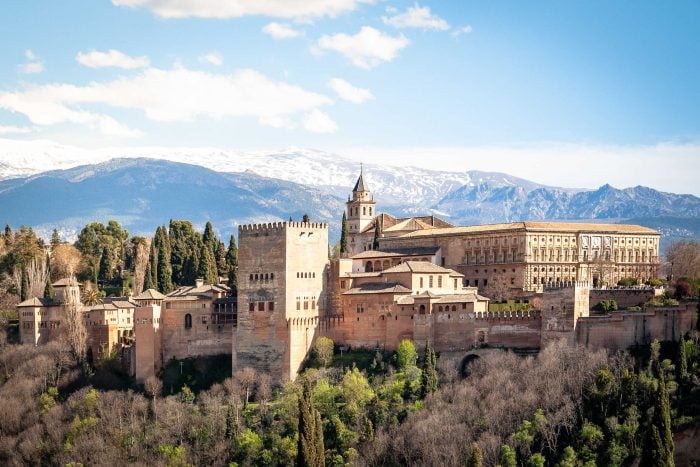 Cast yourself into the dream world of Andalucía, Islamic Spain’s ethereal realm of ancient ruins, Moorish palaces and rustic taverns, set to the outrageously blue backdrop of the Mediterranean. 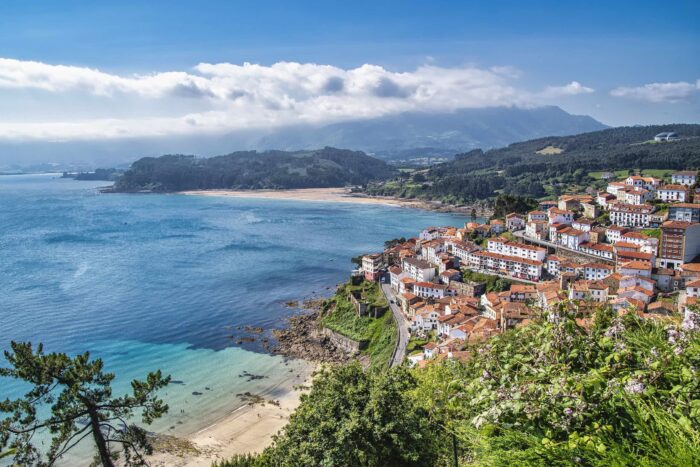 The ultimate road trip in Northern Spain - a 10 day Itinerary 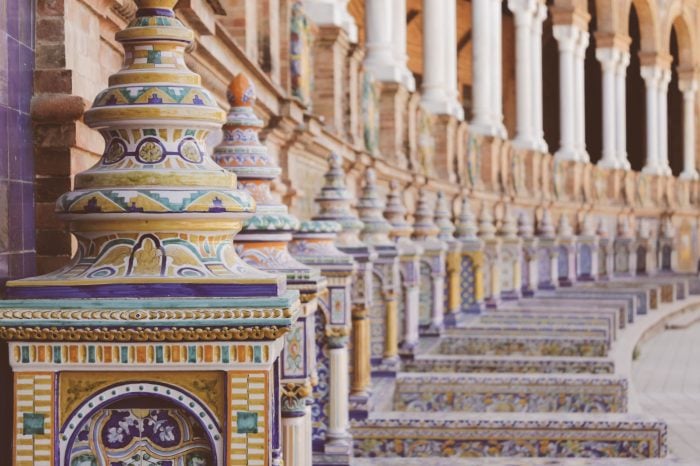 Seville, the vibrant ancient capital of Andalusia, seduces the senses with a wealth of captivating enchantments ranging from ornately-tiled landmarks to a fascinating, multi-faceted history to the fragrant citric trees sprouting from every corner.