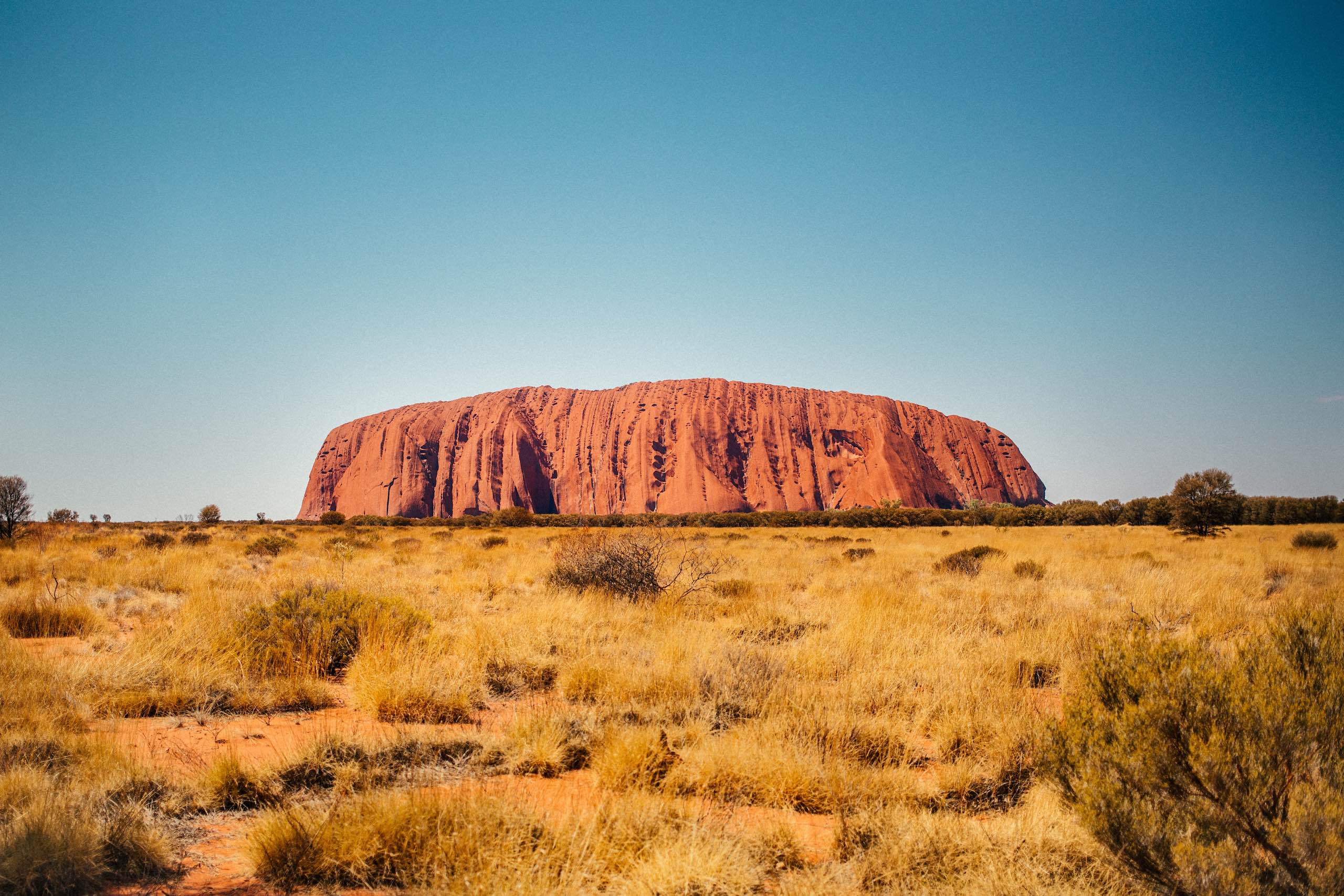 Buckle down your Khaki bucket hat for this next one, as we take the road trip of a lifetime through the most spectacular sights within Australia’s Northern territory. Vast, dusty and sun-cracked yet inexplicably abundant in wildlife and colour, the outback has been the sacred habitat for aboriginal life for millennia, still largely untouched by modern tempos. Journey through the region any way you choose – by highway or dirt byway – choosing pit-stops wisely for immense national park scenery, epic canyons and more.

Immerse yourself in an epic Australian adventure as you experience the insider's Melbourne and Sydney, marvel at the Outback's monolithic wonder of Uluru, encounter iconic Australian animal species and bask for two nights in the Daintree Rainforest. Also explore the Great Barrier Reef from your own island hideaway, and take in the Great Ocean Road's stunning vistas. 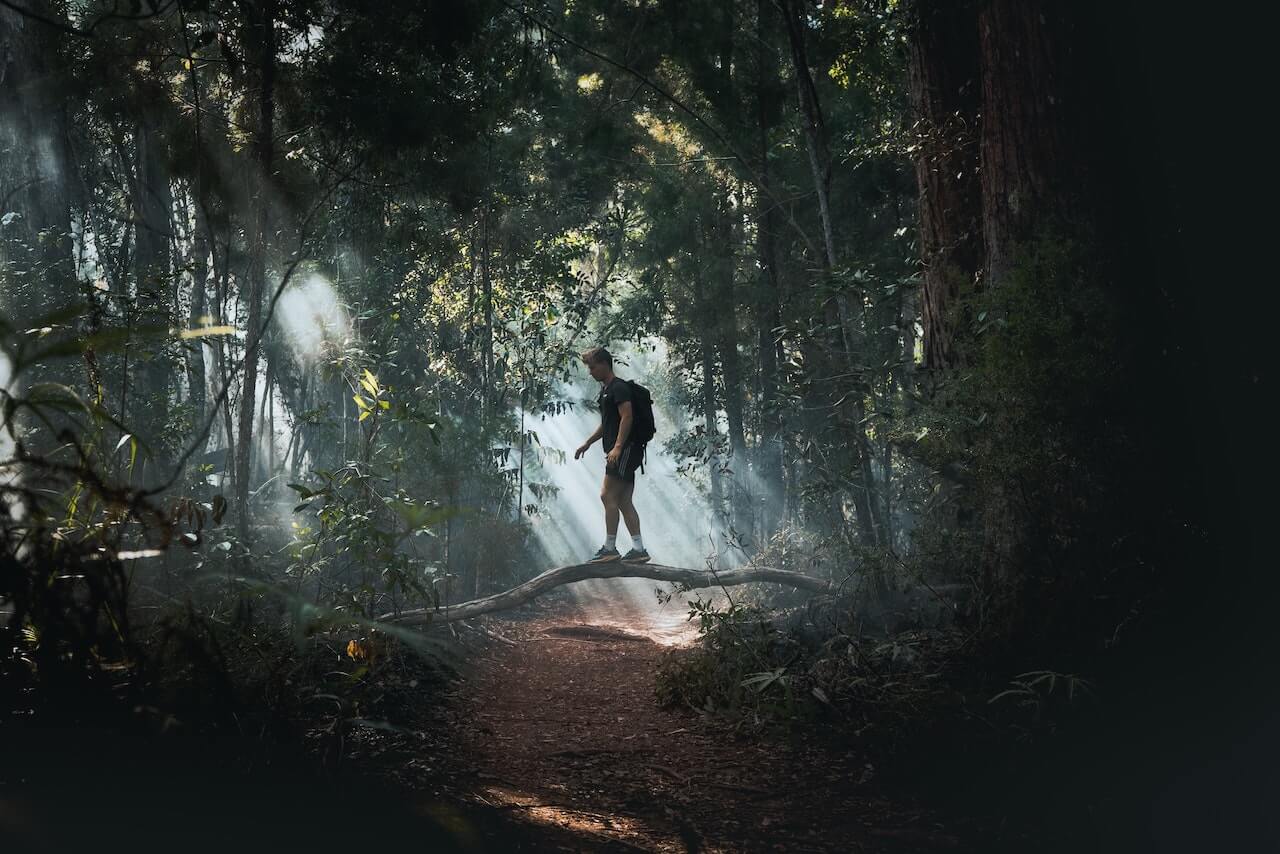 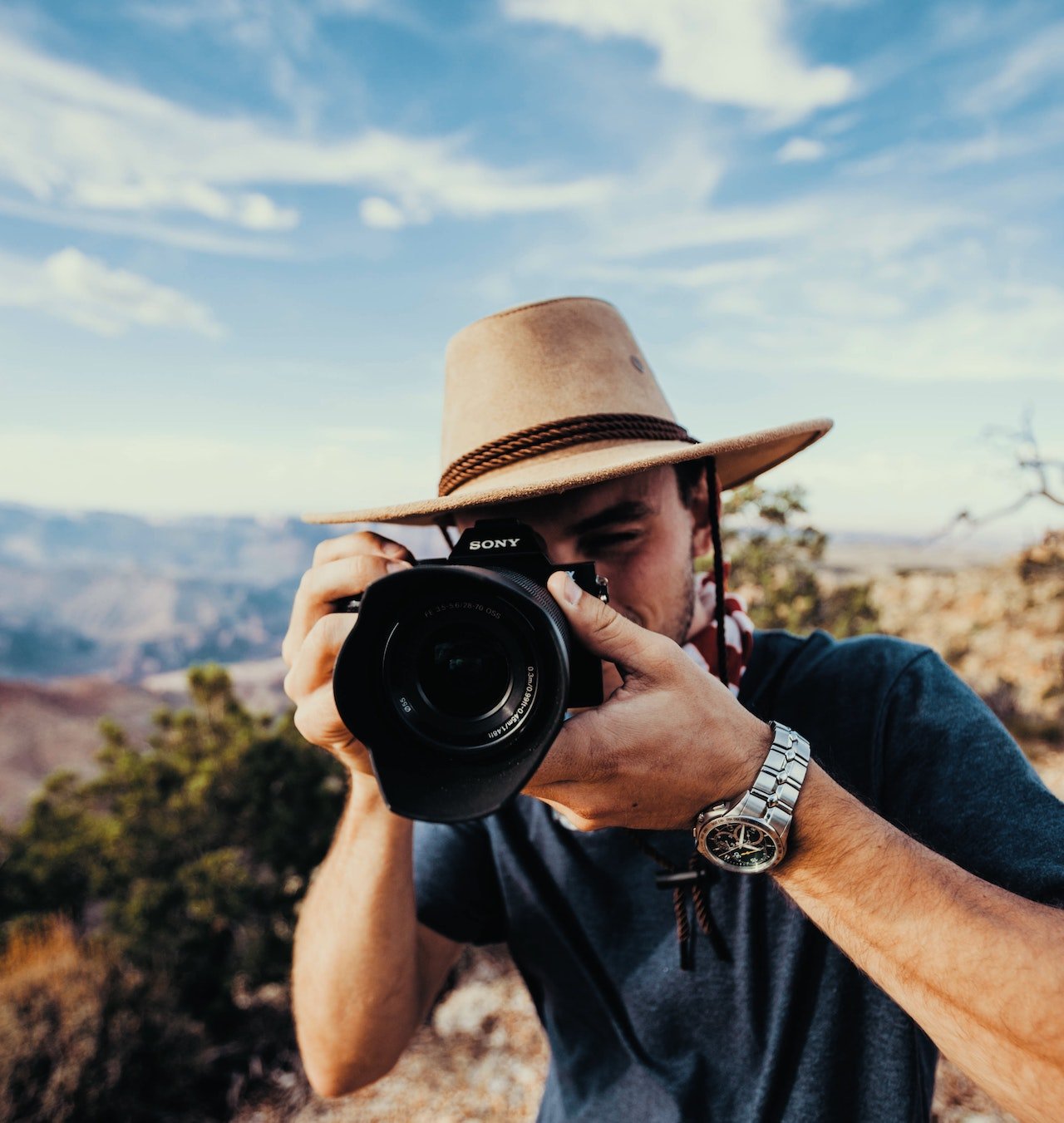 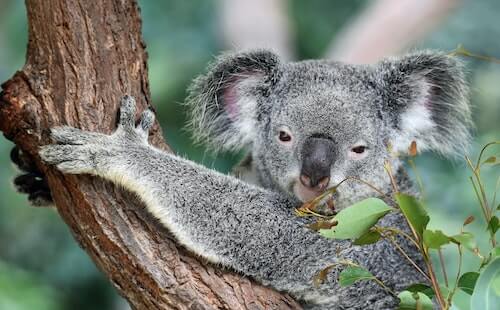 With as many as three tried and tested routes on the drive from Alice Springs to Uluru, there’s the perfect road trip for any traveller, whatever time span, whatever vehicle, or whatever attractions you’re after. Route one goes via Sealed Roads (by Stuart and Lasseter Highways, 450km, 4.5 hours driving time) as the quickest and smoothest trip towards Uluru. Though a straight path to your destination, it’s not the most thrilling of rides and the four hours on the highway can take its toll. Be sure to rest at least halfway through and avoid driving at night when the roads become thoroughfares for kangaroos, camels and cattle!

Route two and three go via Unsealed Roads, allowing drivers the freedom and thrill of partial off-roading. Perhaps the most iconic drive is route two, the Red Centre Way (formerly ‘the Mereenie Loop’, 690km) a ride best taken with overnight rest stops at West MacDonnell Ranges and Kings Canyon Australia, with four-wheel drive recommended but not strictly necessary. Route three, however, travels via the Ernest Giles and Luritja Roads (460km, 5.5 hours driving time) and, as the most adventurous ride of the three, a four-wheel drive is a definite must. 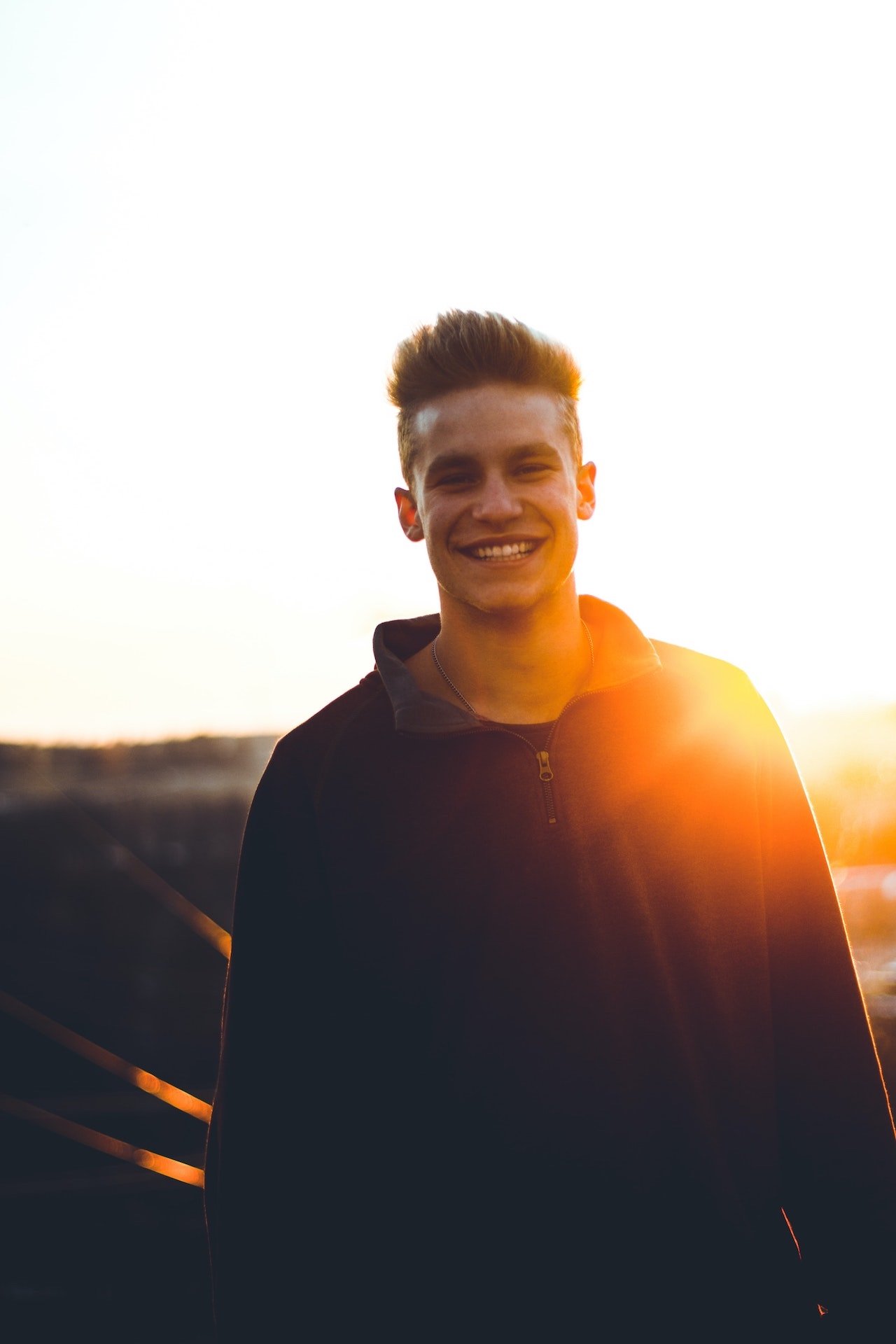 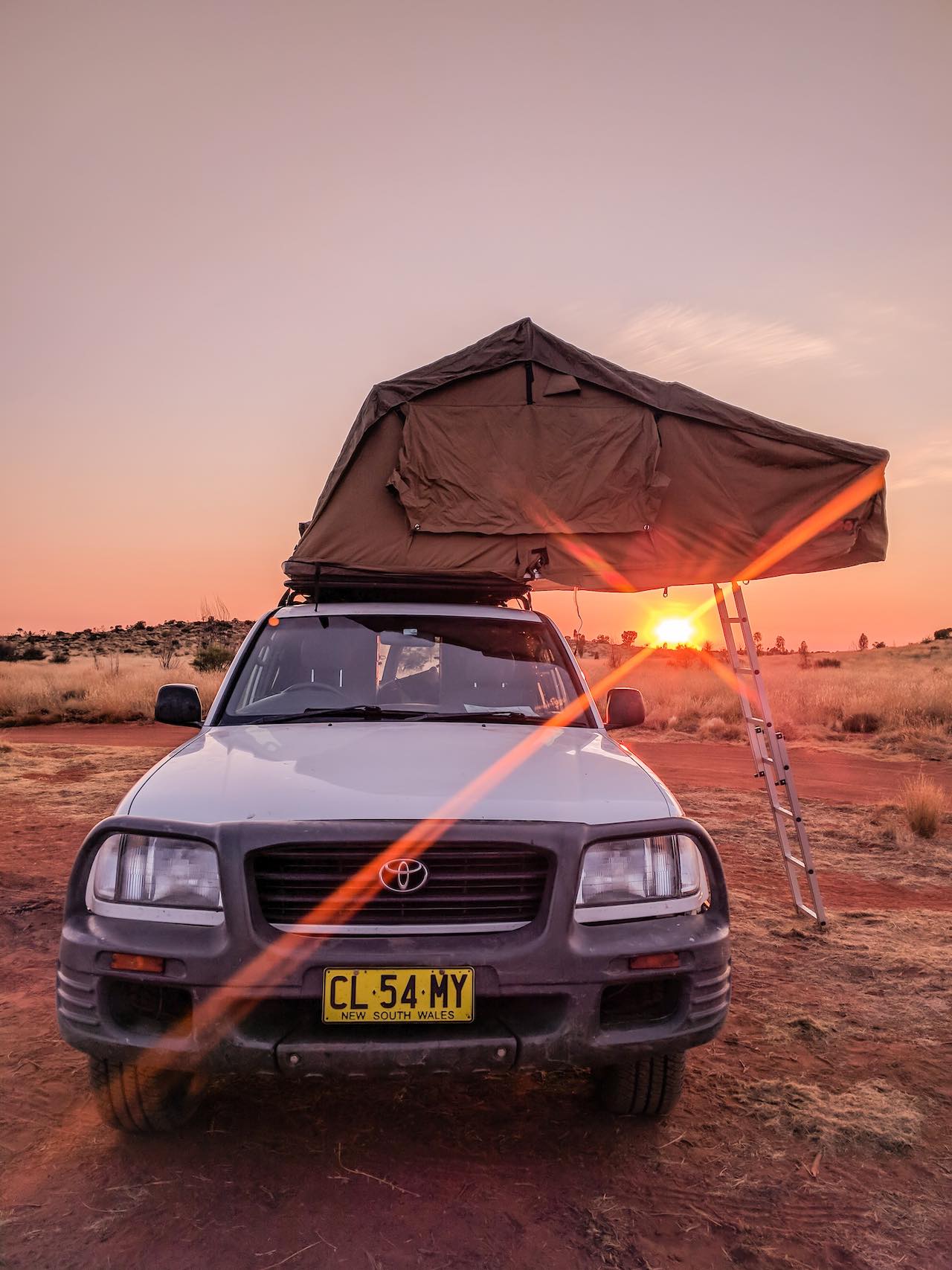 We begin our Outback Australia road trip on the 130 kilometre stretch towards Glen Helen, stopping halfway at Ellery Creek Big Hole, where natural pools form in the gorge of West MacDonnell Ranges and provide a blissful spot for a mid-morning dip

The starting point for the Red Centre Way road trip at Alice Springs sets expectations markedly high. Before revving off towards Tjoritja, make the most of Alice with a trip into Alice Springs Desert Park for an introduction to dingoes, Central Australian marsupials and Princess parrots, before heading to the exotic Olive Pink Botanic Gardens for an alfresco lunch overlooking the desert.

After resting for the night in Alice Springs Australia, wake before dawn to glimpse one of her best spectacles. Just 15 kilometres out of town lies the Owen Springs Reserve where you can go Outback Ballooning at sunrise. Arrange the trip through your hotel for an easy shuttle ride to the park, floating above the dreamy kangaroo-laden landscape for 60 minutes alongside native budgerigars in flight.

Coming back down to earth, we begin our Outback Australia road trip on the 130 kilometre stretch towards Glen Helen, stopping halfway at Ellery Creek Big Hole, where natural pools form in the gorge of West MacDonnell Ranges and provide a blissful spot for a mid-morning dip. The Big Hole isn’t the only attraction in the area, however, as the West Macs span 200 kilometres, mostly in line with the Red Centre Way road. Forget about making good time and stop off at various sites such as the 80-metre drop at Standley Chasm, Ormiston Gorge and the sacred indigenous site of Simpsons Gap. Depending on your allotted time, the Larapinta Trail may also be a consideration. A legendary hiking route running from Alice Springs to Mt Sonder, the Larapinta Trail is one reserved for experienced hikers able to organise food drops during the winter months of June and August.

If taking the road less travelled appeals, then heading to the East Macs from Alice Springs is a nice alternative. The terracotta scenery here is just as stunning but far less populated, with the added bonus of bushwalking, camping and off-roading opportunities within Trephina Gorge National Park, home of the Wallaby Dreaming Trail and Australia’s oldest ghost gum tree.

The next day allows us to explore our base of Glen Helen in more scope, with bushwalks around the entire site, along the five-hour Ormiston Pound Walk or the rather less taxing 20-minute Ghost Gum Lookout Trail. From there, opt to circle back to any of the attractions missed yesterday or stock up on snacks before tackling the winding 225-kilometre ride to Kings Canyon. Experienced drivers can stay on the Red Centre way but hesitant two-wheel drivers may wish to take the longer – though smoother –  route along the Lasseter Highway (7.5 hours). Those staying on the Mereenie Loop, however, do benefit from more interesting window views, with opportunities of stopping at the epic Tnorala comet crater, a site spanning 20 kilometres and said to date back 140 million years. 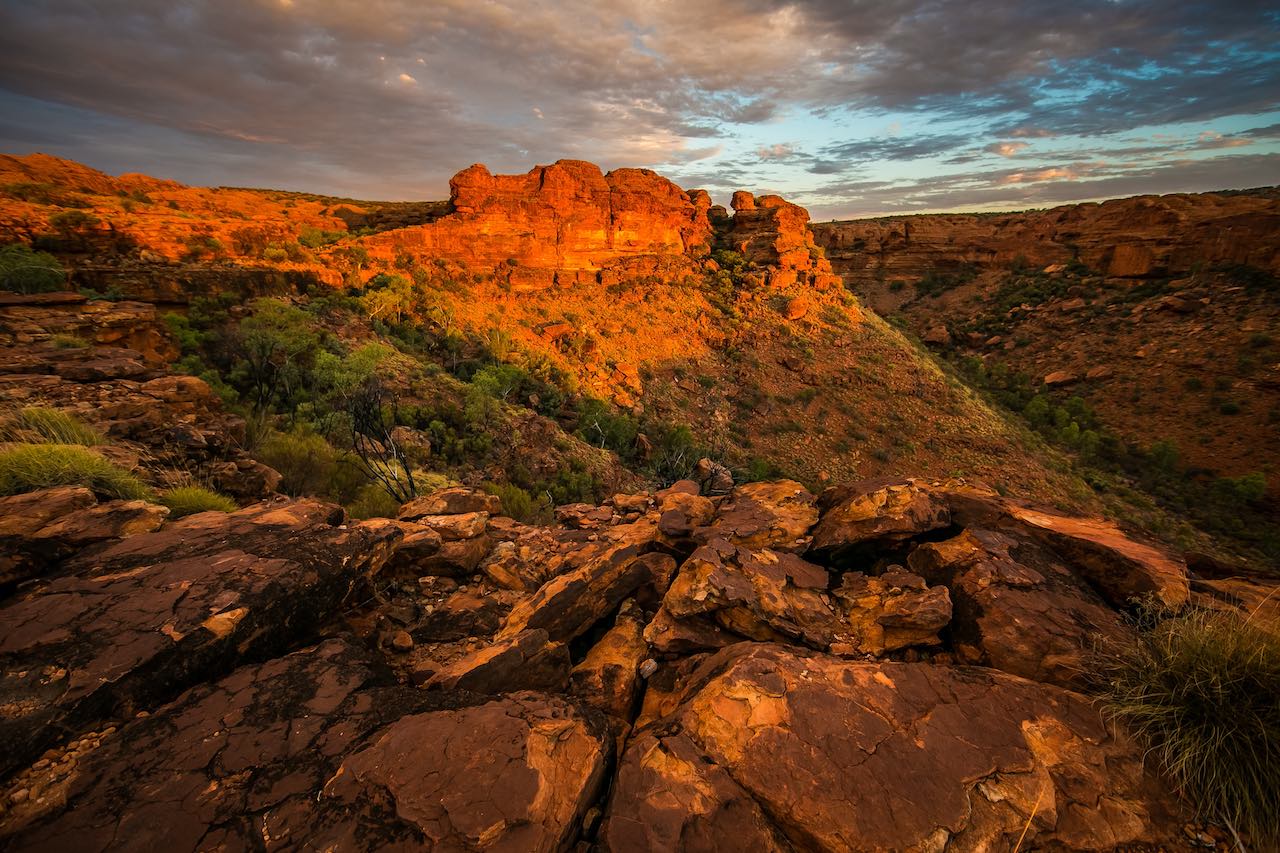 Kings Canyon is where we lay our heads for the night, with the recommendation of an early start to tackle the 6 kilometre Canyon Rim Walk which climbs from valley floor to sandstone cliffs among palm- and fern-lined trails to reach a precipice above the 270-metre Kings Canyon itself. Along the way, look out for the sandstone domes of the Lost City as well as the Garden of Eden watering hole, or, swap it all for the less strenuous morning ramble of the Kings Creek Hike.

From there take a slow lunch with the option of heading into Watarrka National Park for more trekking and bushwalking along sealed paths. Kathleen Springs track is a particular highlight, leading to a waterhole among tall grasses sheltering fairy-wrens and other bird life. 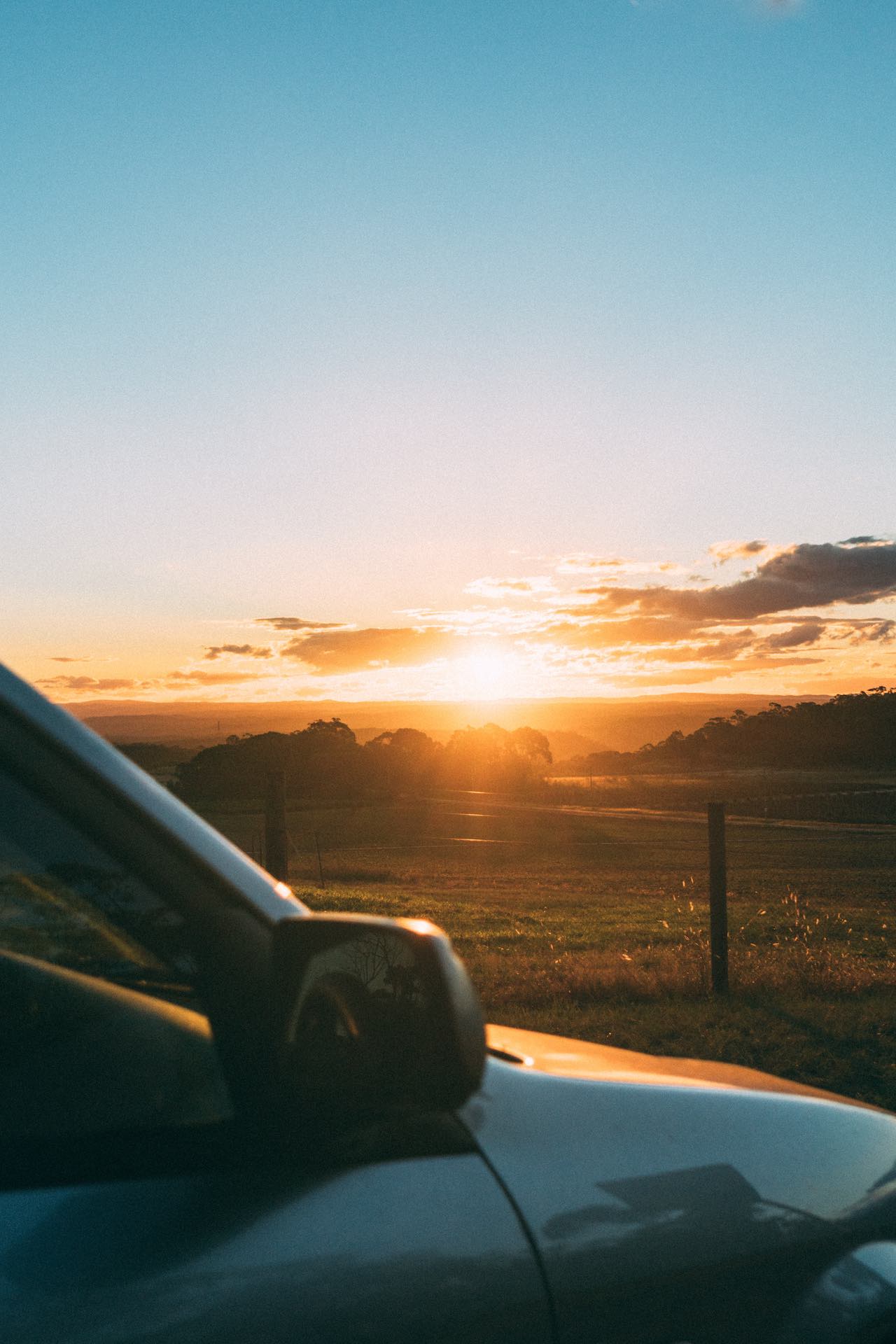 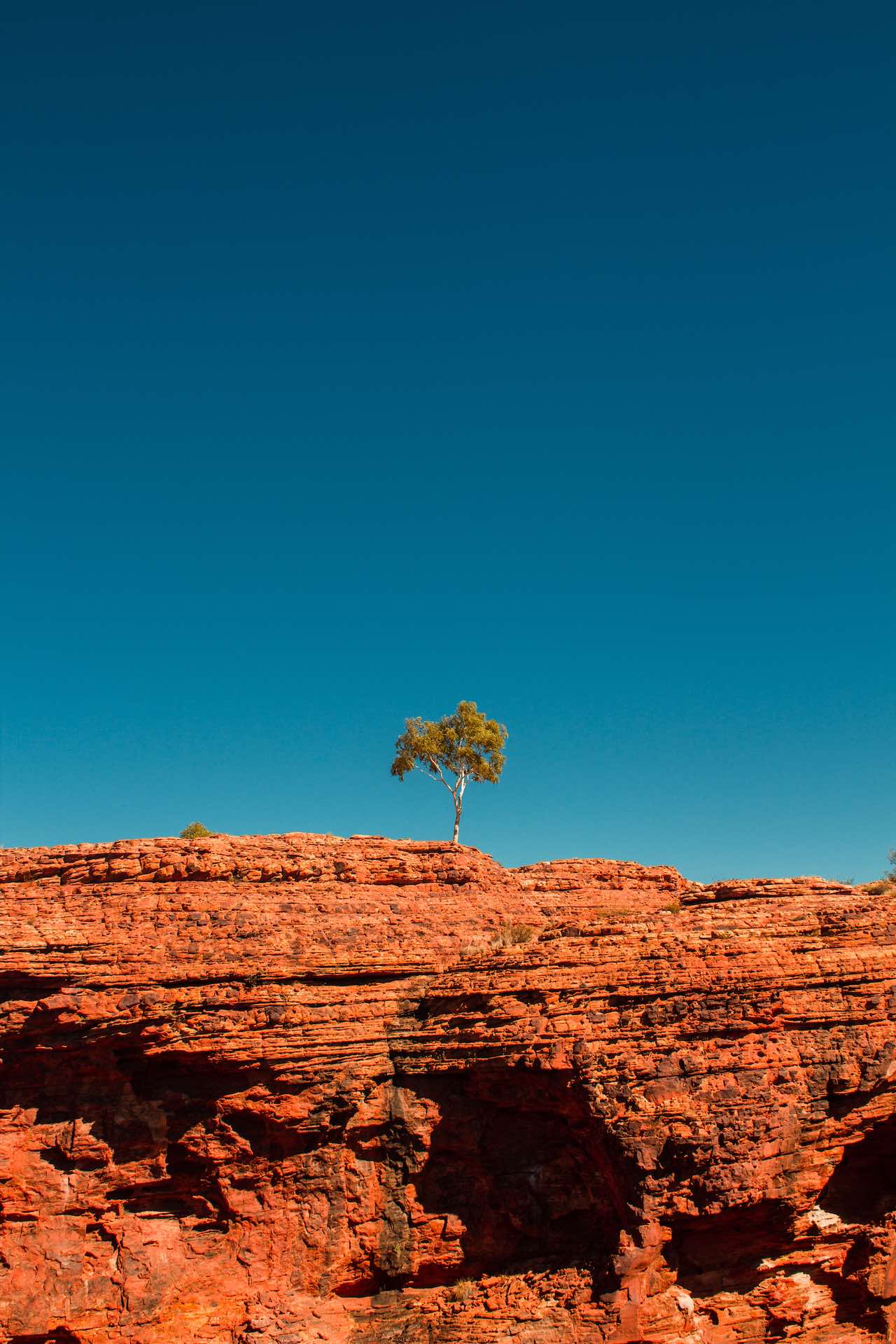 The pinnacle moment on most outback tours, however, lies at the base of Ayers Rock (aka Uluru) the region’s most famous natural site, considered sacred by Australia’s indigenous communities

Looking again to our outback Australia map, we travel south 320 kilometres to Anangu Country where the famous site of Uluru Rock lies within Kata Tjuta National Park. Plan to arrive early afternoon for a rewarding leg-stretch through the grounds of Kata Tjuta, seeing the rock dome formations up close along the 7.4 kilometre Valley of the Winds trail or slightly easier 2.6-kilometre Walpa George trail where in early afternoon sunlight fills the gorge and 178 bird species take shelter amid the rocks. Other wildlife you might encounter include the Red Kangaroo, the dingo and the dinky rufous hare-wallaby.

The pinnacle moment on most outback tours, however, lies at the base of Ayers Rock (aka Uluru) the region’s most famous natural site, considered sacred by Australia’s indigenous communities. The most popular Uluru tour will take you 10.6 kilometres around the circumference, allowing for full appreciation of the rock’s enormity. Taller than the Eiffel Tower at 350 metres, Uluru is not accessible for climbing, but to stay on the ground is not to miss out. Various guided Ayers Rock tours, such as those offered along Mala trail and Kuniya Base, offer local knowledge of the region and teach of aboriginal creation stories, rock art and animal totems on the trek towards Kantju or Mutijulu watering holes. 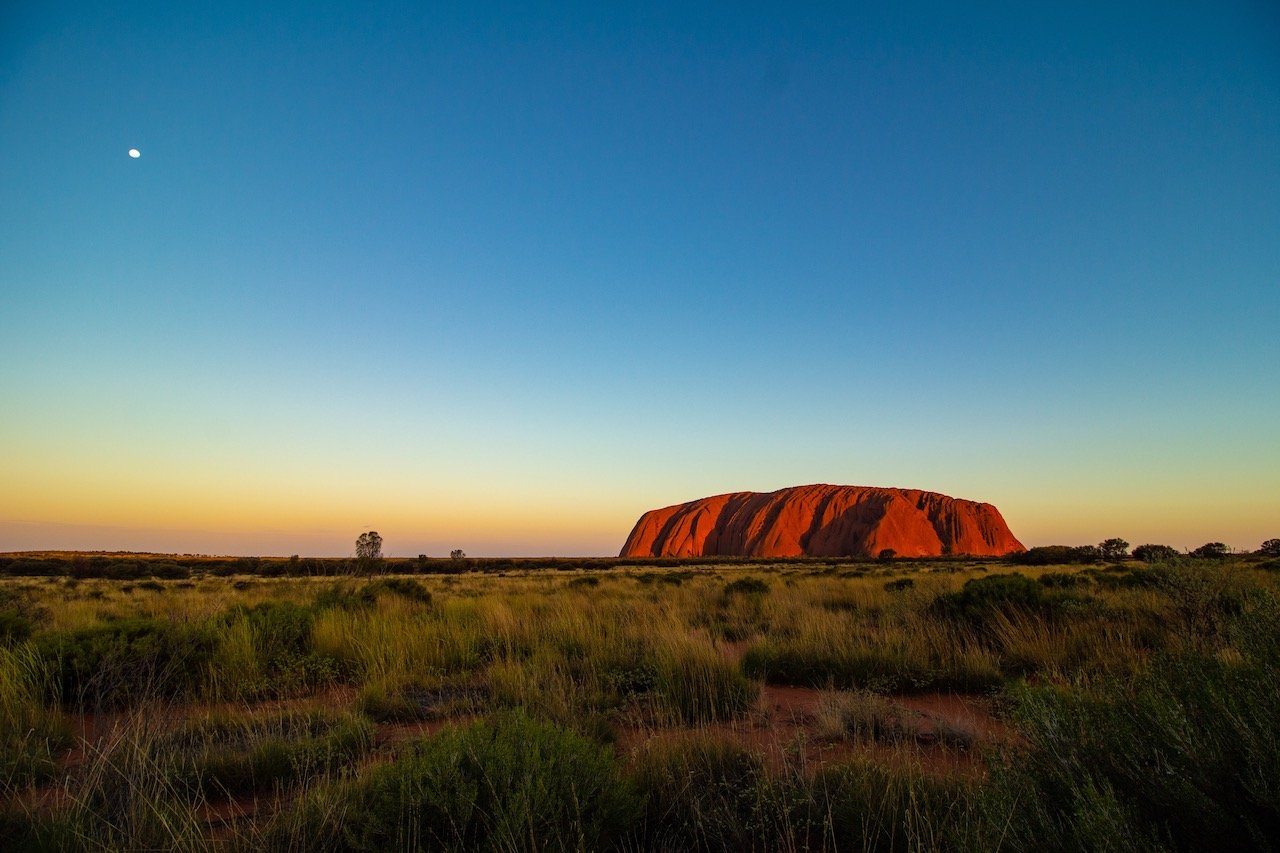 You’ll quite likely want to stick around Uluru for when the sun begins to set. Slap on some mosquito repellent and head to one of the two designated viewing areas, which, despite some crowding, provide unbeatable peachy lookouts across the Uluru-dominated desert park.

UNESCO-listed Uluru lies within the much larger nature preserve of Uluru National Park. While of course, Uluru Rock garners most of the attention, exploration of the surrounding region is not to be missed. Book yourself on an Uluru Camel tour for some desert-themed fun or try something a little more high octane with Segway tours, Harley Davidson rides or even a heart-leaping skydive.

After exhausting the trails around Uluru and tanning to a crisp, it’s time to make the 445-kilometre journey back to Alice Springs. Covering whatever you missed the first time around and discovering other regional gems ensures the trip can never be a dull one, especially if you’ve taken some effort on your Spotify playlist!

Other sites you might’ve missed include the horseshoe-shaped “Fooluru” mountain, otherwise known as Mount Conner, an Uluru-lookalike with a prime viewpoint over the sweeping salt lakes below. Closer to your endpoint of Alice Springs, any meteorology nerds shouldn’t resist seeing the 12 craters at Henbury Meteorites Conservation Reserve, while those in need of one last scenic backdrop can stop in at Rainbow Valley Conservation Reserve for the multi-coloured sandstone cliffs of James Range that glint in the late afternoon sun, as though Australia herself is bidding you adieu. 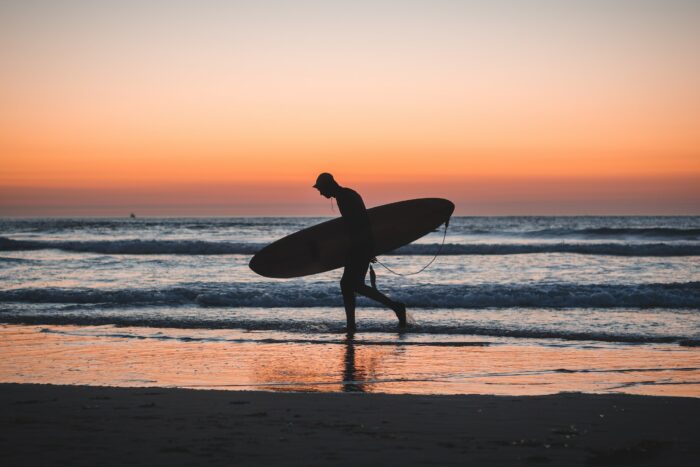 Sprawling sandy beaches facing the Pacific Ocean make San Diego one of the best cities in the United States for west coast sunset seekers. With over 70 miles of coastline, San Diego is home to countless sublime sunset views, plus just as many unique ways to experience them. 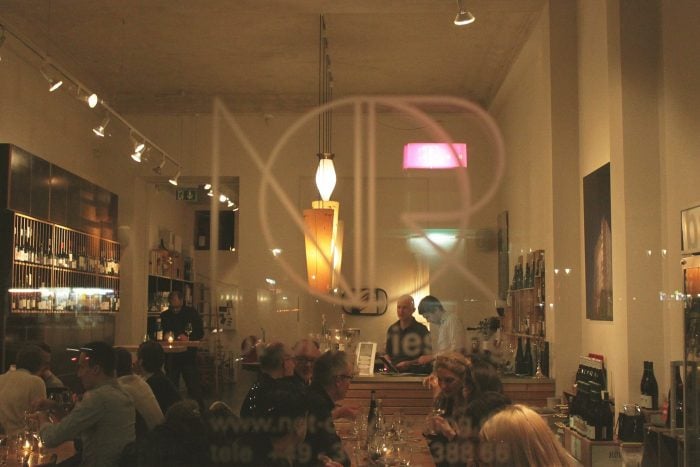 The best wine bars in Berlin 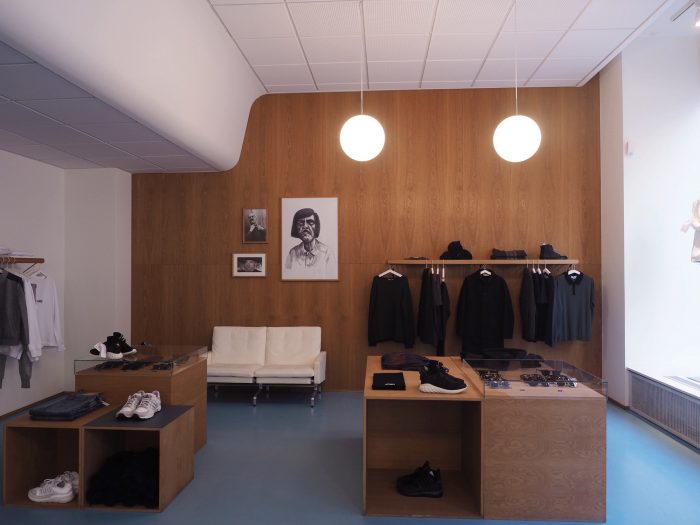 The best menswear shops in Copenhagen

Danish men’s fashion has been on the international radar for quite a few years now, and Copenhagen brands continue to inspire with cool and wearable items focusing on high-quality design.